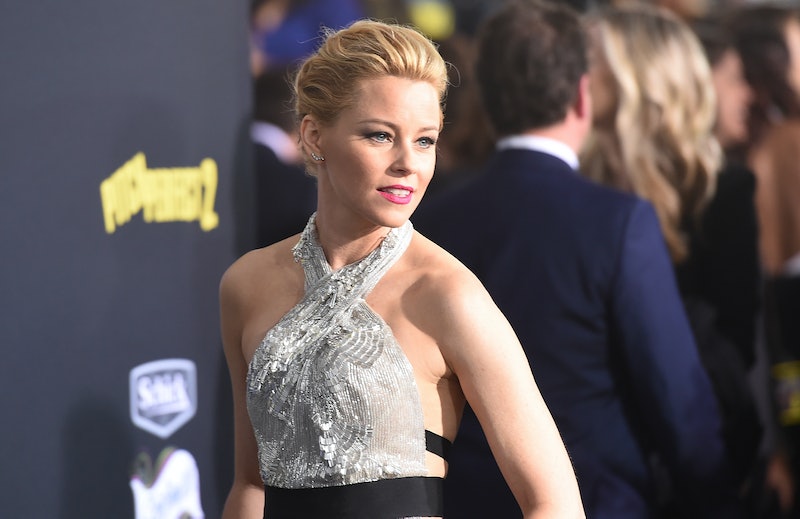 There are a million reasons to be excited about Pitch Perfect 2 — the new songs it includes (all the more to get stuck in your head!), the brand-new Bellas, the plethora of new, quotable Fat Amy-isms. However, while all of that is amazing, it's really what happened behind the scenes that makes Pitch Perfect 2 so special. The film is an anomaly in Hollywood: It was co-written and directed by a woman, it stars a diverse group of actresses, and box office predictions are suggesting that Pitch Perfect 2 is going to beat out the most macho of macho summer blockbusters — all while singing and dancing. The might behind Pitch Perfect 2 is its director, Elizabeth Banks, of course: After all, it was her vision and enthusiasm for the sequel that raised it to phenomenon-level... all before its May 15 release.

Banks has made a career out of being a scene-stealing co-star: This is clear based on her roles in films like The Hunger Games, Wet Hot American Summer, 30 Rock, and, of course, the first Pitch Perfect film. However, with Pitch Perfect 2, Banks is taking the reigns and doing things her way. As she said during an interview with The Hollywood Reporter , "I like entertaining people. I want to make big entertainment." She's not shooting for a fun girls' night out flick; she's aiming for a huge hit that will sway Hollywood's standards of what makes a movie successful, especially when it starts a mostly female cast. After all, Hollywood has long subscribed to the antiquated belief that solely women can't carry a film — even though they've been proven wrong in the past.

Considering the anticipation building up prior to this movie's release, with Pitch Perfect 2, Banks has a real shot at making Hollywood execs notice how wrong they are about female-driven films.

Banks recently sat down with The Independent and revealed that, "I became a director because I felt under-used by Hollywood." Considering how few women direct major motion pictures, and how under-represented women are on and off screen, it's about time that someone like Banks carved her own path. As she continued: "I'm hopeful that making this movie — that was written by a woman, directed by a woman and stars a lot of women — I'm hoping that we inspire more women to go behind the camera and take leadership positions." I couldn't agree with her anymore.

We can all be excited to see the Bellas kick ass and take names all over the aca-universe, but it's all the more fulfilling knowing just how much progress this film is making for women in Hollywood. Again, since this film is made almost entirely by women and it's slated to be a huge hit, there's hope that it may change the current mindset in Hollywood that female filmmakers aren't bankable. Though there are a handful of successful female directors — Angelina Jolie, Sofia Coppola, Kathryn Bigelow and Ava DuVernay, to name a few — they are more often the exception to the rule rather than the rule, simply because Hollywood rarely gives female filmmakers a chance.

In fact, the American Civil Liberties Union has just launched an investigation into the gender-biased hiring practices of the film industry — things are that bad for women in this industy. Additionally, according to a study by San Diego State University in 2014, only seven percent of the 250 highest-grossing movies were made by women. Elizabeth Banks is saying outright that she hopes her work pushes more women to the top right before one of the biggest summer movies is released, and that's just as important as Pitch Perfect 2's very existence is.

Pitch Perfect 2 is set to hit theaters on May 15.

More like this
This 'Hunger Games' Alum Will Star In A New Medical Drama Titled 'A Mistake'
By Alyssa Lapid
Sandra Bullock, Girlboss Extraordinaire
By Matt Harkins & Viviana Olen
Laura Dern Said “Cultural Awareness” Made Her Rethink This 'Jurassic Park' Fact
By Grace Wehniainen
The 'Hocus Pocus' Sequel Finally Has A Release Date & It Makes Total Sense
By Shannon Barbour and Radhika Menon
Get Even More From Bustle — Sign Up For The Newsletter