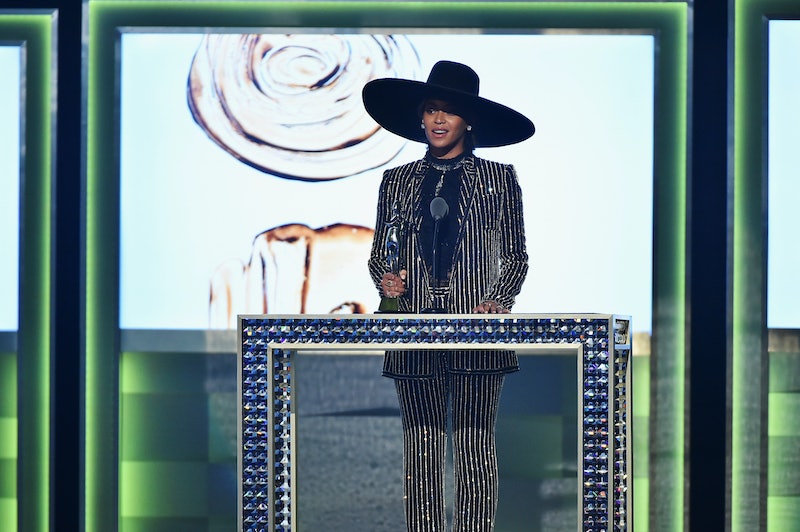 That's how you accept the 2016 CFDA Fashion Icon Award. Beyoncé was named the CFDA's 2016 Fashion Icon, deservedly so. Of course she accepted the honor looking positively stunning. Beyonce wore a sparkling, striped Givenchy pantsuit to the event in NYC, pairing it with a wide-brimmed black hat. Her take on menswear was a flawless execution that incorporated one of her go-to designers with her current stage style. Bey has worn Givenchy to several Met Galas, including her naked latex dress for the 2016 edition of the ball. She has been slaying stages left and right, all the while wearing huge black hats as she performs on her Formation Tour.

Bey's Givenchy pantsuit/tux had plenty of feminine, fashion-y touches. The pinstripes sparkled and she added plenty of bling, accessorizing her ensemble with Lorraine Schwartz jewels. The Ivy Park guru also went with neutral makeup, pairing nude glossed lips with barely-there but shiny eye makeup. It was a smart move, since her makeup didn't compete with her suit's sparkle or her megawatt smile. Her smile was, in fact, her best accessory. That thing can light the world during a global power outage.

There was some flow to the pants. They weren't a skinny silhouette, which gave her overall look a bit of a divine '70s vibe.

See the bling and the smile.

Like a boss? No way. Beyoncé is a boss. She isn't merely like a boss. Got it?

That hat, though! It really calls more attention to her smile.

Beyoncé was cool as ever in this pantsuit.

See the outfit in action in this clip. So much confidence, right? Bey paired the pantsuit with skyscraper stilettos, further upping the sexiness quotient of this ensemble.

Congrats again to Beyoncé on being bestowed with the 2016 CFDA Fashion Icon Award. She wears it (and everything she puts on her body) well.