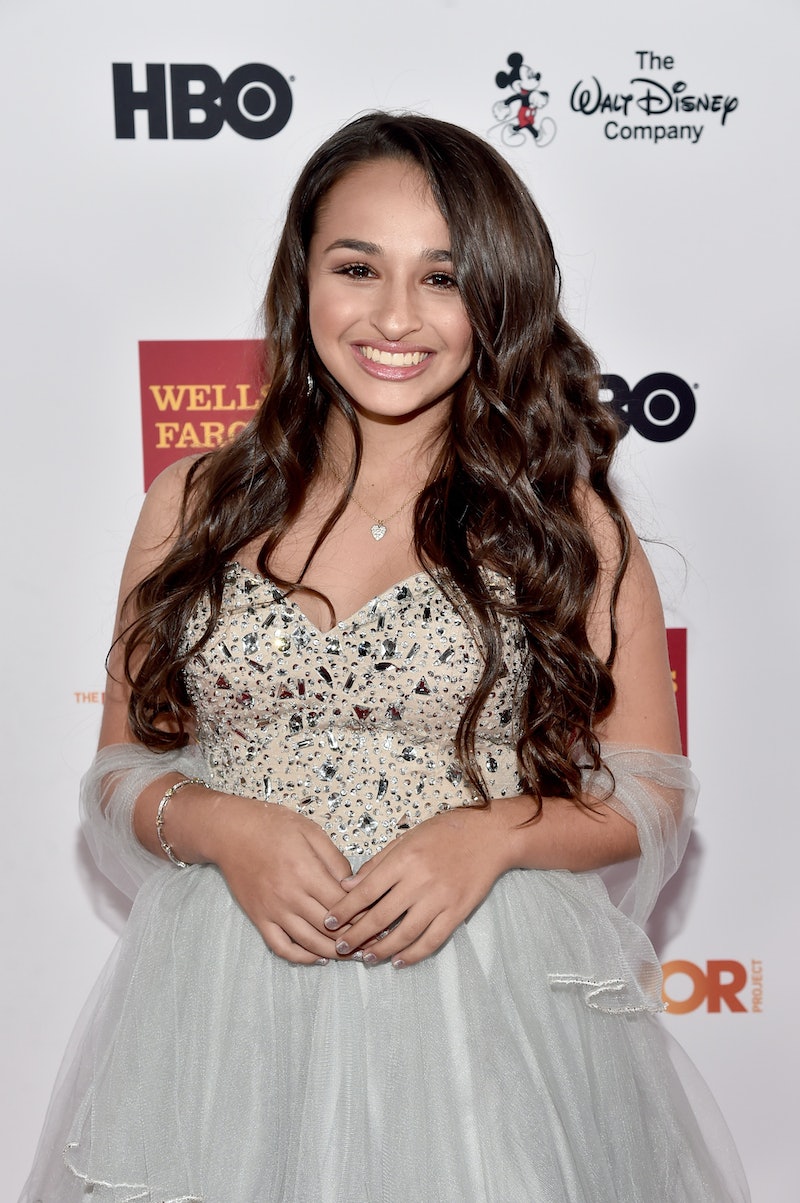 Fifteen-year-old transgender activist Jazz Jennings is certainly not your typical teenage girl. She's been honored by TIME, GLAAD, Advocate magazine, and more for her work on behalf of the transgender community. She's the star of the TLC reality series I Am Jazz . She's the number one student in her high school class (as her mother proudly told me, much to Jazz's embarrassment.) She's an artist. She's a soccer player. She's a girl who loves mermaids and fantasy novels and watching endless episodes of television with her friends.

She also a published author: her memoir, Being Jazz: My Life As A (Transgender) Teen , out June 7, offers readers an unfiltered look into the life of a teenage girl who happens to be transgender.

"This is my idea: I want to keep sharing my story until the day that I don't need to share my story anymore," she tells Bustle. "I personally think right now, like I wish I didn't have to share it. I wish people could look at me, and be like, 'Why is she in the media? She's just a teenage girl.' But that's not the way they look at it.... I want society to really understand what it means to be transgender and understand that we're just like everyone else."

Being Jazz opens at the very, very beginning of Jazz's story: her mother, Jeanette, was pregnant for the third time. She and her husband, Greg, already had a daughter, Ari, and a younger set of twin boys, Griffen and Sander. She was convinced her third pregnancy would bring her a second daughter — and a family superstition confirmed that gut feeling.

At [my mom's] baby shower, her friends all crowded around her belly and did the necklace test — that old-timey trick that's supposed to predict what kind of baby a woman is going to have. You hold a necklace with something heavy attached to it, like a pendant or a ring, over a pregnant belly, and if it swings back and forth it means she's having a boy. If it moves in a circle, a girl is supposedly on the way.......She knew she was going to have another daughter even before her friends did the necklace trick for the third time in her life and it spun around in circles like crazy. Everything about the pregnancy was identical to what she had gone through with Ari, so she was completely shocked when the official ultrasound revealed a penis on my body.

Looking back, Jazz and her mother now know the necklace trick got it right.

Jazz, named Jaron at birth, knew she was a girl before she could even verbalize her emotions. As a toddler, she would "undo the snaps on [her] onesie to turn it into a dress." When she began talking, she told her mom she wanted to "dwess like Awee [Ari, her sister.]" Around the house, she wore her sister's pink and purple clothes and "wobbled around the kitchen in dress-up heels covered in feathers." She had a dream that a Good Fairy promised to use her wand to turn her penis into a vagina.

At age three, Jazz was diagnosed with gender dysphoria, and at age five, she began living as a girl. In the 10 years since, she and her family have become some of the most recognizable advocates for transgender people's rights. In her memoir, Jazz details her mother and father's tireless work to create a safer, more inclusive world for their daughter. By fighting for Jazz, they paved the road for future parents of transgender children and helped implement changes that affect kids across the country.

In one such instance, her parents were successfully able to lobby the United States Soccer Federation to grant their daughter permission to play on a girls' soccer team in their state. The family's two-and-a-half-year battle not only resulted in a victory for Jazz, but a victory for children across the country. As a result of the Jennings' perseverance, the USSF decided to change their policy to allow trans students to play on their gender-identified teams.

I couldn't believe that by fighting so hard for me, my parents ended up helping to make a change that affected the entire nation. I'd already started to speak on some panels with my mom and do more interviews about my life and transgender rights, but this was the first time I saw just how much good advocacy work could really do. I was only eleven, but it made me want to start working even harder.

In person, Jazz is a smiley, cheerful, teenage girl, and that bubbly personality reflects itself in the pages of her memoir. Even when she's talking about weighty topics — like bullying, depression, and rejection — she manages to imbue her tales with a refreshing positivity. She's also quick to remind readers that she has much to be grateful for, including a loving family who have fought tirelessly on her behalf. Her book is, by no means, a one-size-fits-all guide to growing up as a transgender girl in America. She recognizes her privilege, and she understands that she has been extraordinarily blessed in many ways.

"I've talked to a bunch of people who aren't doing so well," she tells me. "They're struggling with being transgender, their identity, and getting that support from their family and friends. I just tell them to stay strong and keep moving forward. I know it's a simple message, but it's really important to have a positive outlook on life."

Despite her positive attitude, she admits some parts of the book — including a section that details her struggle with depression — were emotionally straining to write. "It was actually very difficult," she says. "I had to go back to certain times, and it wasn't just about going back and recollecting my experiences. It was about recalling my emotions, as well."

Ultimately, she hopes that pulling those emotions forward and pouring them into her memoir will inspire others to be more accepting, more understanding, and more loving.

"I think people reading this book have to understand that not only is being transgender OK, but being different is OK," she tells me. "You just have to embrace who you are, accept yourself, and accept other people as well. It's all about love. Loving yourself and sharing that love with other individuals. I think that's the most important thing."

More like this
16 Novels That Paint A Realistic Portrait Of Abortion
By K.W. Colyard
Aesop's Queer Library Is Open
By Tomi Otekunrin
5 Gripping Books To Read From Women’s Prize For Fiction Winner Ruth Ozeki
By El Hunt
Why You're Seeing Green Bandanas At Abortion Rights Protests
By Lexi Inks
Get Even More From Bustle — Sign Up For The Newsletter