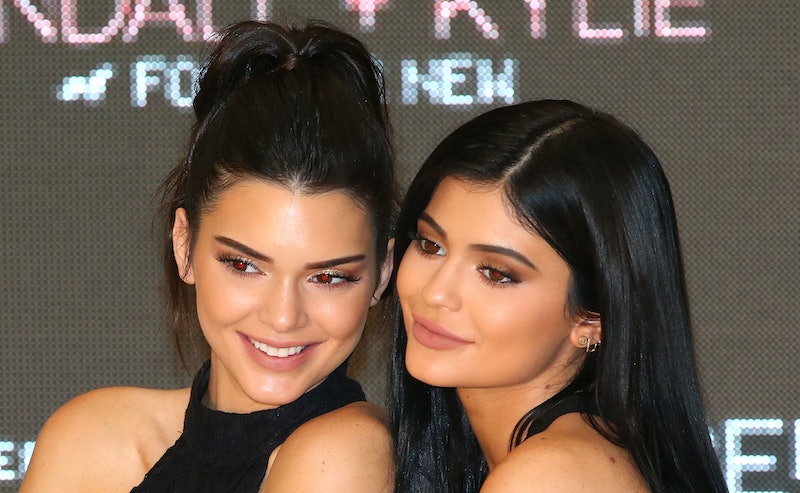 While there were some crazy makeup looks we indulged in during junior high in the earlier 2000s, there are some playful and loud 2016 makeup trends that our middle school selves would have very likely hated. This might seem a little contradictory when you think back to all the neon pink hair mascara and the heavy-handed raccoon eyeliner we sported, but back then those looks were about keeping in pace with the status quo. Even though today some of those beauty looks seem ill-advised, we were usually tempted to copy them if all the kids were doing so in class. And so the frosted pink lip gloss was swooped on and the pencil thin eyebrows shaped.

So what makeup trends nowadays would have our pre-teen selves cringing? I think a fair guess would be anything bold and slightly out of the ordinary. For many kids, it's hard to stick out and be the bold one at that age (confidence issues, y'all), so walking out in a vampy lip or opting for a bright blue lipstick might have make us feel a stroke coming on. But those aren't the only options. This year there are so many playful looks around that have us itching to get creative with our palettes and eyeliners. But below are 11 2016 makeup trends you would have hated in middle school.

Um, eyeliner that's not black? No way. Granted some of us who were already makeup savvy could do a wicked cat-eye by that age, but leaving the dark color spectrum and opting for a fresh smear of white would have just been way too weird during those tween years.

I know we were into the glitter look when it came time for school dances, but never to this magnitude. Now, however, it's a pretty fun look if you want to go out with your friends on a Saturday night, whether that's to a tiki bar or a disco.

The thick, messy brow look was very much not in vogue in the early 2000s, so we def wouldn't be down with this Cara-inspired heavy brow look. Instead, it was Pamela Anderson we looked up to, what with her pencil-line-thin arches.

You mean I can't even put on a little bit of mascara? Like, not even a lick? Well, that's just madness. I think anyone who had a heavy hand with the black eyeliner back in junior high can attest to how nutso this trend would have been back in the day. I'm getting stress sweats just thinking about it.

Anything that would make you stick out was usually seen as a major faux pas, so these neon slicks of shadow would have never made it into our glittery makeup boxes. Eek.

Only witches and goth girls could pull off dark lipstick, as a rule. And if you were neither, it was pink lip gloss all the way, not this Halloween-inspired look.

While this is a totally cool concept, I could see 12-year-old me squinting at this face and wondering if the model was forced to do some kind of closed-eye-makeup challenge, only to somehow miss her eyelids by a few solid inches. I didn't have the most progressive beauty-oriented mind in my prepubescent years.

Blue lipstick? Yellow lips? Bright orange hues? Ahhh! Like it's fine if you get those hues from a popsicle session, but not from lipstick tubes. This would have been deemed way too weird.

While every My Little Pony-loving bone in my body would have been all "yes! yes!" to this trend, I don't think many of us would have been brave enough to show up to the playground rocking the look. That said, this is just the ticket for festival weekends and fun Friday nights out nowadays.

During the era of Jessica Simpson's slick pout and Juicy Tubes, ain't no one going to look at matte lipstick and think it's acceptable. But now it's all the rage, arguably thanks to one Ms. Kylie Jenner and her Lip Kits.

We spent those years trying to get away from the oily skin look, not add onto it. Everything from dabbing sheets to T-zone controlling soaps were in our arsenals, so going for that dewy, glossy lid and cheek look would have been an insane notion. But we know now that it's an oh-so-gorgeous look.

It seems there are a lot of trends that we follow now (or at least are curious to dabble in) that our pre-teen selves would have gaped in horror at. But that's the beauty of growing up: You become a lot more open minded and a lot more willing to experiment. After all, makeup is meant to be fun! So get weird.