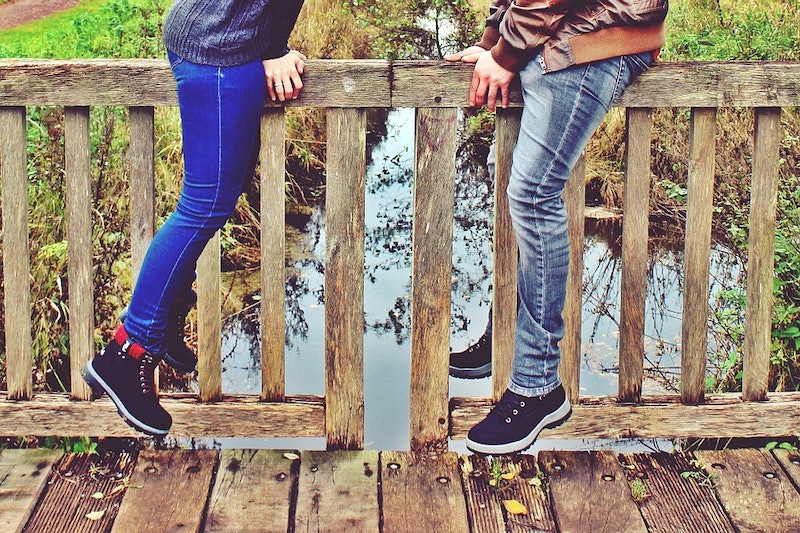 When I was younger, I blindly thought that once people were in a committed relationship, things got easier. As many of us know to be true, this isn’t always the case. Sometimes you simply settled down with the wrong person. On that note, let’s talk relationship traps to avoid — because as you’ll see in this article — there are plenty of them. A lot of times when we enter a relationship with the wrong type of person, we might not even realize it until way down the line, when we feel flat out trapped. I know when this has happened to me in the past, by the time I realized the person I was dating was toxic for me, I’d already come up with about 100,000 things I “loved” about this guy, so there I was… trapped. I couldn’t let go. To help you and I both avoid these types of traps moving forward, I’ve rounded up some expert advice on the relationships we should avoid at all costs.

Do you know that friend who's dating the complete jerk? No matter how many times you hang out with him or her, you can’t seem to fathom why your beloved friend would even consider staying together with them. However, your friend just doesn’t see it. I’ve been on both sides of this story, too, and know how easy it can be to fall into the trap of someone who's not a good match. The key is realizing it, and vowing to avoid a similar situation in the future. With that in mind, here are 11 relationship traps to avoid, according to experts.

You know the type of person I’m talking about here, right? You start dating someone who seems amazing — it’s as if they’re always there to listen to you about how you feel. Over time, though, you realize this person not only listens to how you feel, but someone manages to change your thoughts and feelings to align with theirs. Before you fully realize the manipulation is happening, you’re suddenly trapped.

According to relationship expert Margaret Paul, Ph.D., who penned an article for Huffington Post on the topic, a manipulator will try to make you feel like you’re wrong for having the thoughts and feelings you have, and that only his or her feelings are valid. Paul said this is the kind of person you want to avoid being in a relationship with.

Dating and relationship blogger James Michael Sama wrote a blog post on his site — JamesMSama.com — about the kinds of people you should avoid dating, and cited people who use relationships as a means of finding inner happiness. Sama wrote that some people will turn to relationships to fill an emotional void. As Sama put it, if the relationship this person has with themselves isn’t a healthy one, the relationship they have with someone else will not be either. If you feel like you’re there with the responsibility of being an emotional cheerleader for your SO, and nothing more, it might be time to clock out.

3. The Lack Of Trust Trap

Trust… it’s so, so important in a relationship. In fact, according to research conducted by John Gottman and reported on by YourTango.com, trust in a relationship is the most noticeable predictor of relationship success. Not only that, though. If you’re in an untrusting relationship, Gottman’s research showed it can negatively affect your physical health as well. Fearing a lack of trust between someone you’re dating? Think of those facts and choose what you’re going to do wisely.

4. The Lack Of Romance Trap

Romance isn’t everything, but it sure is something. Joshua Pompey, an online dating and relationship expert, wrote on article for Huffington Post on the kinds of people to avoid dating. Pompey cited those who go big in the romance department in the beginning of a relationship, but fall off the wagon not long after. Pompey said usually it’s when laziness starts to set in that the romance here burns out — but it shouldn’t. While things don’t need to be roses and candy every day, romance should still remain a part of the mix, even if only in smaller, less frequent ways.

If he or she is wishy-washy on commitment and commitment is what you’re hoping for, don’t stick around. According to Dr. Judith Orloff, psychiatrist and author of The Ecstasy of Surrender: 12 Surprising Ways Letting Go Can Empower Your Life , you shouldn’t put your life on hold for someone who isn’t ready to commit to you fully. Emotionally unavailable men and women like this are tough nuts to crack, and you might find yourself wasting a whole lot of time trying to breaking them down only to get nowhere.

Another trap to avoid is sticking with someone who as an “all about me” mentally. Paul spoke of narcissists in her Huffington Post piece, and noted it’s often difficult to get people like this to fully care about you and/or your feelings. They’ll require attention to be on themselves all the time, which will make it very difficult to form a loving and nurturing relationship.

I’ve fallen into this trap before — and it was awful, to say the least. The guy I was “seeing” often spoke to me with such disrespect that my friends couldn’t believe I agreed to even spend any time with him at all. The Telegraph spoke to David Water, a couples’ counselor, who discussed this problem of being verbally cruel in a relationship. Waters said people who tend to ridicule or talk down to partners are putting their relationship in a destructive place. It’s one thing to disagree or have an open and honest conversation about differences, but handling problems with nasty words is problematic.

On that note, any sort of verbal or physical abuse in a relationship should be not be tolerated, according to Sama. Sama wrote, “Never allow yourself to be consistently discouraged or torn down by someone who is supposed to love you. Your significant other should be your teammate, your confidant, and your supporter.”

According to the relationship experts at YourTango.com, every healthy relationship will have some disagreements every now and then, but it should not be filled to the brim with fights each day. The experts noted those in happy relationships want to talk things out rationally and work on problems, versus blow things up into huge, unnecessary arguments at every turn.

Pompey cited another type of person to avoid dating… the control freak. If you think your partner is overly controlling and possessive (e.g., tells you when and where you’re allowed to go out, must approve your wardrobe, etc.), you might consider sneaking out of the trap before it snatches you it.

If your current SO has an ex who he or she speaks to on occasion, it shouldn’t be overly concerning. However, if you feel like the ex is part of your relationship in a way — always swinging by to say hi, calling to check in constantly, and the like — you might consider that things are too close for comfort. According to marriage and family therapist Joan Sherman who spoke to WebMD on the topic, “…if it’s happening 24-seven, it’s a problem. It’s going to keep both of you from enjoying the new relationship.” Why? According to Sherman, it could be a sign your partner hasn’t fully moved on.

Take a close look at the relationship you’re in now —whether it’s one that’s just taking off, or one you’ve been in for a while. If any of these relationship traps seem familiar to you, you might consider reevaluating the partnership and whether it really has what it takes to last.