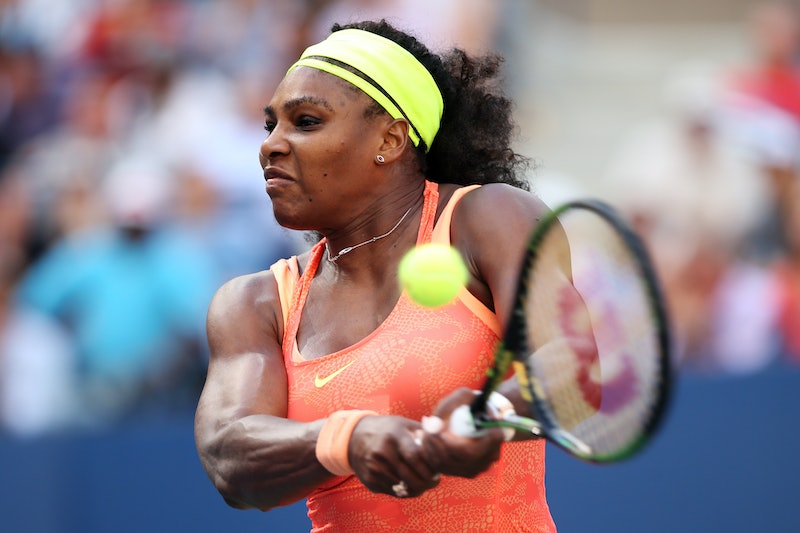 Last summer, tennis champ Serena Williams became the unwitting subject of an Internet frenzy when rumors swirled that Williams was dating rapper Drake, especially after the two were spotted together multiple times, including once at the U.S. Open in September. Williams and Drake kept whatever relationship they had (or didn't) mostly under wraps, with Williams rolling her eyes at a press conference when asked if Drizzy was her "lucky charm" (barf!) and saying, "We've been friends for, like, so many years. Just like family." In a new interview with Glamour magazine, Williams talked about whether or not Drake lost her the U.S. Open.

After rumors of the couple lit up the Twitterverse, sports fans seemed to blame the rapper for her loss at the tennis tournament, but Williams insists this is complete nonsense. She told Glamour,

"I don’t think that was fair. I’m the one who’s playing, who’s making mistakes or making winners. I’m not one to blame anyone else for anything. And I don’t think anyone else should either. I played a really good opponent that day. And I wasn’t at my best."

Williams makes a completely valid point — it's totally unfair to blame someone's romantic life (rumored or real) on a loss on the court. It's nothing new, of course, especially when it comes to high-profile romances between pro athletes and celebrities. In 2007, Jessica Simpson was called a "bad luck charm" in the media when she appeared at then-boyfriend Tony Romo's lowest-scoring Cowboys game; Gisele Bündchen has also been called a "jinx" or "bad luck charm" when her husband Tom Brady's Patriots have lost football games. (Are you rolling your eyes yet?) It's a totally tired trope with absolutely no truth behind it and yet, it persists every time an athlete like Williams is rumored to be dating a celebrity.

As for Williams, she's not letting the loss of last year's U.S. Open get her down... in fact, she tells Glamour it's simply more motivation. She says,

"I work harder. I study to see where I went wrong. But I carry the loss. My coach has said to me, "When you win a match or a tournament, you don’t even think about it — the very next minute you’re like, 'Now I’ve got to focus on Wimbledon.' You should take the losses the same way. I need to look at those losses as learning experiences."

Thankfully, it seems Williams doesn't let rumors — no matter how ridiculous they may be — get in the way of her kicking butt on the tennis court, which is all that matters, no matter what keyboard warriors think. Bravo.

More like this
Prince William Reveals Charlotte's Hidden Talent In Ultimate Proud Dad Moment
By El Hunt
Selena Gomez Is Fine Being Single, But She Still Manifested Romance On 'SNL'
By Martha Sorren, Jake Viswanath and Jack Irvin
Martin Hancock’s Wife Played A Key Part In His Return To 'Coronation Street'
By Catharina Cheung
Why Sara Pascoe's Husband Is Familiar To Comedy Fans
By Alice Broster
Get Even More From Bustle — Sign Up For The Newsletter