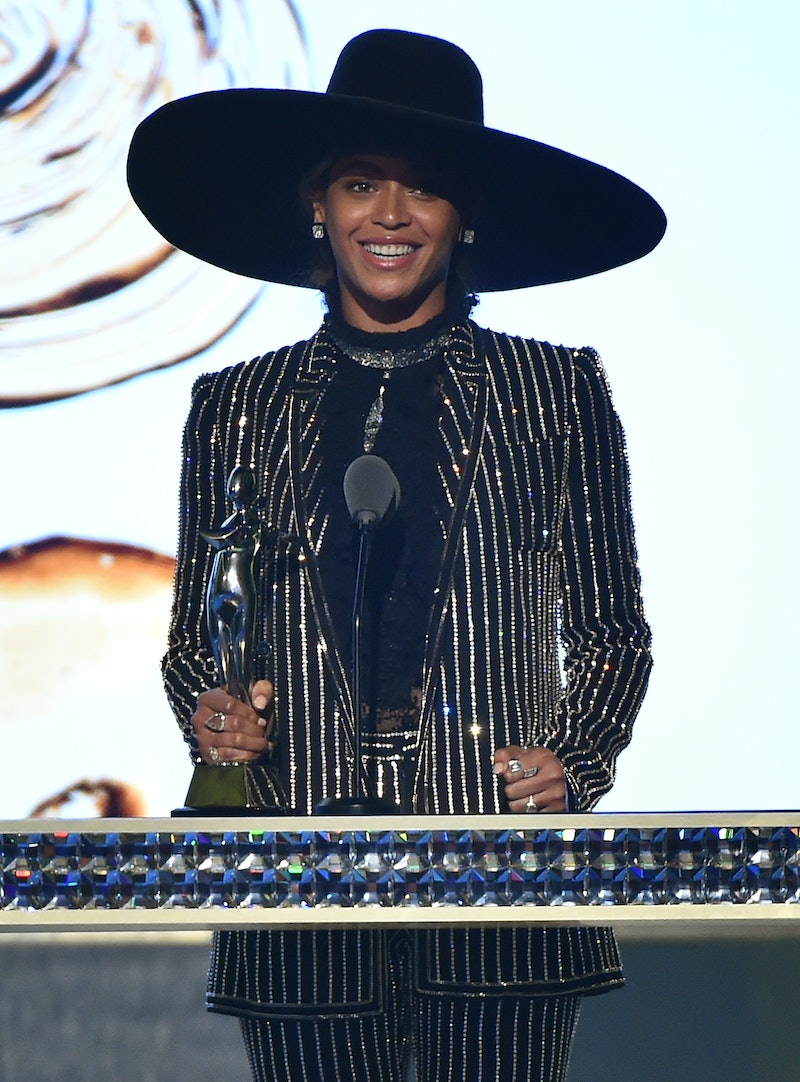 When. Won't. Beyoncé. Slay? The Queen Bee shut it down at the Super Bowl earlier this year, dropped Lemonade by surprise as if it was no big deal (and it definitely was!), and has now Beyoncé has won the 2016 CFDA Fashion Icon award. Standing on stage in a sparkling, black and white pinstriped Givenchy pantsuit, and her signature Formation Tour wide-brimmed, black hat, Bey looked like fashion royalty in all of her menswear-inspired glory. But it wasn't what she was wearing that left the sweetest taste in my mouth, even though it assured me she deserved this honor. It was Beyoncé's heartfelt acceptance speech that left a lasting impression.

Connecting the fashion award back to her roots, Beyoncé spoke highly of her grandmother and mother, who she says used their talents and creativity as seamstresses to give their children the world, even when they couldn't afford designer pieces. If there was anything to be taken away from Bey's words, for me, it was that it shouldn’t take fancy labels and high-end designers to make us prideful in our appearance. Her icon award speech was a big shout out to all women in our families that have greatly impacted our style and sense of self when we put on an outfit. The more she honored her mother and grandmother with her every utterance, the more I became instantly connected to the women in my own family.

A "three generations" photo taken of my mother, grandmother, and me.

As I watched Beyoncè's acceptance speech, I was taken back to a conversation between my mother, grandmother, and I nearly a month ago. As we sat around my grandmother's kitchen table, and as she tailored a few pieces we brought to her, we reflected on my mother's upbringing. Just like Tina Knowles, my grandmother was a personal seamstress of sorts. From dance recital costumes, to summer vacation wardrobes, to first day of school ensembles, my grandmother often made clothes for my mother and her sister. Listening to my mother rave about some of her favorite custom-made outfits, I was touched by how prideful she was of having her mother make her clothes. It was a feeling that I can now see she and Yoncé share. It was a sense of pride I desperately wanted to feel.

My mother in a tank and shorts made by my grandmother.

Although lately Beyoncé's red carpets involve peach, latex Givenchy this and sheer, embellished Givenchy that, there was obviously a time when she couldn't afford to wear high-end labels. That never stopped her from having wow-factor costumes during her Destiny's Child days, when her mother and uncle handmade the group's coordinating wardrobe. Similarly, my grandmother made name-brand-like clothes for my mom when she was a single, working mother who couldn’t always afford the "real" thing. Ironically, other children always thought my mom and her sister were wearing the latest and greatest because my grandmother carefully crafted all of the clothes she did make.

My mother, pictured with her younger sister and cousin, in a top, skirt, and jacket set made by my grandmother.

How well dressed they were is is the one compliment my mother and her sister routinely received as kids. Knowing that my grandmother was the “designer” behind those clothes created a special sense of pride for my mother. Because of that, I understand exactly what Beyoncé means when she says, “When I wore these clothes I felt like Khaleesi. I had an extra suit of armor. It was so much deeper than any brand name.” No, I don’t know from personal experience (my mom never quite picked up the knack my grandmother had for sewing). But if you could hear the excitement in my mom’s voice every time she recalls the outfits my grandmother made her, you would feel the deeper, emotional connection she had to her clothes. They were made with hard work and infused with love by her mother, and you could tell my mom admired every stitch within them; a feeling Gloria Vanderbilt jeans and IZOD polos could never match.

My mother's friends even borrowed clothes my grandmother had made. Here, they sport matching shorts and polo sets, complete with designer logos sewn into them.

Although times are different and my grandmother has never made me an entire outfit from scratch like she did for my mom, her sewing skills have played a role in my life too. Finding clothes that actually fit my body is the ultimate struggle. It’s hard out here for someone like me with mega boobs, a curvy butt, and a small waist. To hear Bey say labels didn’t really want to dress "four black country curvy girls" is no surprise to me, considering I often feel left out when shopping in most popular stores.

This part of Beyonce's speech helped me fully appreciate all that my grandmother has done for me. I can’t tell you how many times she has rolled her eyes at me because I’m back at her house again to have her break out her sewing kit and machine. If I desperately want to buy something that doesn’t fit me well, I have the luxury of taking it to my grandmother to have her alter my clothes in any way I see fit — even if that means she'll give me a lecture about wanting a split in my skirt that she deems scandalous. When brands make me feel excluded, all it takes is my grandma to save the day and make me feel a part of the “in-crowd”. I imagine that’s how Tina made Bey feel when she designed her clothes when no one else wanted the job.

More than anything, some of Beyoncé's final words reigned true for me. Speaking on the true power and potential of fashion, Yoncé voiced that "It’s a tool for finding your own identity. It transcends style, and it’s a time capsule of all of our greatest milestones.” The times I needed my grandmother’s sewing skills the most were during major life events, such as my during my upcoming college graduation when I took a slew of clothes to her I wanted to wear that needed some extra love.

Through my clothes, a piece of my grandma has always been there with me during major moments whether she was physically present or not. Something as simple as my grandmother adding a hem to my pants or a slit in my skirt makes me appreciate my clothes even more because the matriarch of my family blessed my wardrobe with her personal touch. The same goes for my mother during her childhood. She made some of her greatest memories in life when she happened to be wearing entire handmade outfits by my grandmother. Tina's fashions were apart of the major milestones and memories in Beyoncé's life — her prom, wedding, and even her very first CFDA awards — just like my grandmother’s sewing has been for my mom and me.

Flapper dresses my grandmother made for my mother and her dance team without using patterns.

As I sat and watched my grandmother hand sew some of my clothes for my graduation week (she felt the job was better suited for her touch, rather than the work of a machine) while my mom talked about her childhood, I was a bit emotional that I hadn’t stuck with sewing when she tried to teach me. I wouldn’t be able to add my touch to my children’s clothes like my grandmother had done for my mom. I wouldn’t have the experience of seeing them light up and rave about clothes I specially made them like my mom does when she gets so emotional speaking about what my grandmother had done for her as a child (just as Tina did for Beyoncé).

But now, I'm determined to join the ranks of great women that include my grandmother and Tina Knowles. I'm determined to give my own daughter that sense of belonging, even if mainstream brands still don't want to dress black country curvy girls. I hope my grandmother is ready to give more lessons, because Beyoncé has officially convinced me to break out the sewing machine that's been collecting dust under my bed.