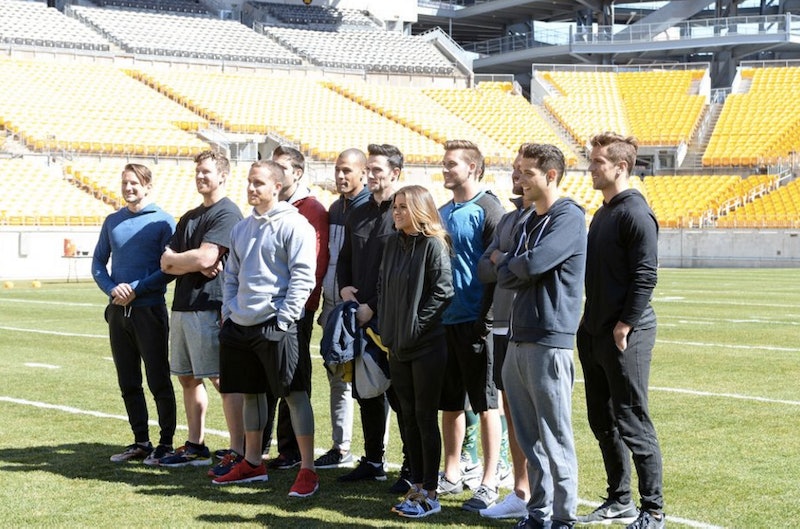 Like many others watching JoJo's Bachelorette season, I am so sick of Chad. At this point, I'm less upset about the threats and the rude comments and the obnoxious eating of deli meat and raw sweet potatoes, and more upset that he just won't leave. (He needs to leave because of all of that other stuff, but you get it.) The guy was denied a rose on his two-on-one date on Tuesday night's episode and somehow the episode still ended with a "To be continued..." that showed Chad scraping his nails against a window like he was starring in a horror movie.

Chad has taken over the entire season and made The Bachelorette less about love (or, "love") and more about all of the guys rallying to get him out of the house. It's like an entirely different show, one where men are tasked with finding a way to kick someone out of a house, but the only way to do it is to convince a woman to send him packing.

Because of this Chad obsession that has spread through both the mansion and the show itself like wildfire, I truly believe I can predict the next Bachelor based solely on the guys' interactions with him. The Bachelor needs to be someone who Bachelor Nation has bonded with, who makes it pretty far in the season (and thus must have a connection with JoJo), and who is generally likable. Below is a list of the 13 men who remain, ranked in order of their likelihood of being the next Bachelor and based on how they've interacted with this season's villain.

Yep, Chad, you did it. You made this happen.

Like Chad himself said, Alex focuses too much on Chad. Even at the end of Tuesday's episode, he and JoJo were talking about how they don't have to talk about Chad anymore. YOU ARE STILL TALKING ABOUT CHAD. The Bachelor needs to be someone who focused on his relationship with JoJo only to be heartbroken in the end. That ain't Alex.

Like Alex, Evan received a rose on Tuesday's episode just because he was anti-Chad. Also like Alex, Evan will be leaving soon now that his mission is complete.

Daniel once equated his relationship with Chad to someone being friends with Hitler. Daniel will be leaving soon for a myriad of reasons, but his friendship with Chad certainly won't help.

Wells seems just as concerned as I am that the Chad drama will never end. At this point I'm convinced that Wells doesn't care about any of this and just wants to leave. Can someone save Wells, please?

I... am not sure who this person is, but I assume he also hates Chad.

Vinny... is also still there.

Grant was confrontational with Chad and handled it pretty well in my opinion. (He didn't actually go outside to fight Chad when given the offer.) That said, Grant isn't really standing out much at this point, so he'll soon fade into the group of people who were just there to support the anti-Chad cause.

Jordan has definitely been in arguments with Chad, but he hasn't made it his mission to take him down. Instead he just rolls his eyes and makes cocky responses to Chad's comments about him... and then I find these cocky responses oddly attractive. (Please tell me I'm not the only one.) Anyway, Jordan will get pretty far in this, but Bachelor? Nah. He's been shown in too many confrontations. And, really, Aaron Rodgers brother as the Bachelor? That's too much.

Chase was the one who went on the way too intense yoga date with JoJo. I think this guy will make it far, as I assume JoJo associates him more with making out in a 110 degree yoga studio more than she does with Chad.

James Taylor was on his swing dance themed date with JoJo when some major Chad drama was happening at the house, which was lucky for him. He's stood up against Chad some, but not so much that it's taken away from his relationship with JoJo. The question is: Can a man who is named James Taylor be the Bachelor?

Robby has done a good job staying mostly out of the Chad drama. Way to go, Robby.

But the next Bachelor (based on Chad interactions) winner is...

Derek's run-in with Chad was mature, composed, and oddly sexy (again, tell me I'm not alone). Of the people who have had direct conflict with Chad, Derek is the one who is most likely to win JoJo — and Bachelor Nation — over with the way he handled it. When JoJo asked Derek about what was going on with Chad, he was honest and straightforward in his response. Plus, his entire storyline hasn't been about Chad, because he and JoJo have already been on a date together and really bonded over making a lot of decisions together. This guy has both final three and next Bachelor potential. JoJo doesn't choose him, he'll be the next Bachelor for sure. I think Chad would agree.

More like this
Everything To Know About 'Bachelor' Host Jesse Palmer
By Justice Namaste and Radhika Menon
Former 'Bachelor' Producer Elan Gale Knows The Secret To Your Favorite Shows
By Samantha Rollins
It’s Official: The Bachelorette Is No Longer A Fairy Tale
By Samantha Allen
Memes & Tweets About Logan Switching From Rachel To Gabby On 'The Bachelorette'
By Grace Wehniainen
Get Even More From Bustle — Sign Up For The Newsletter