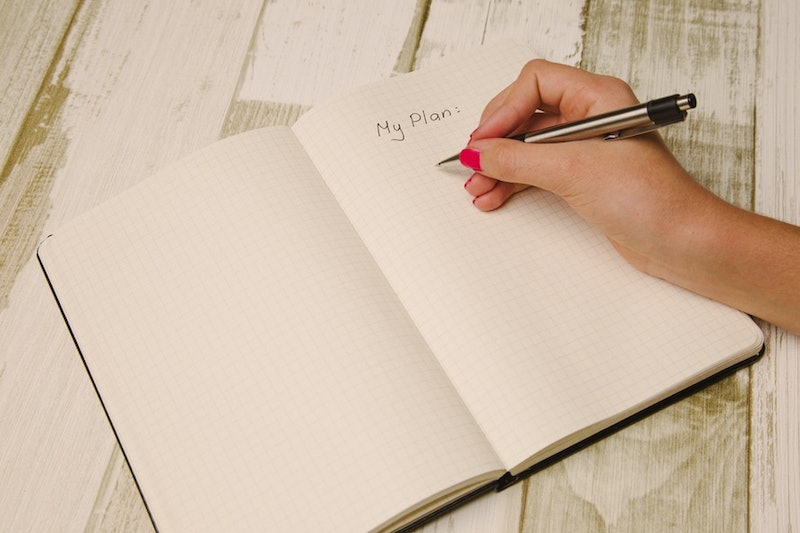 I have always found the process of setting goals to be really easy, but if I’m honest with myself I don’t tend to excel at sticking to them. I don’t think I’m alone in this department. If this resonates with you too, you might find these simple ways to stick to your goals as interesting and helpful as I do. As you’ll see, staying on track with goals is just as much about the process of goal setting (doing so in the right way) as it is about the process of achieving them.

Every so often I’ll open a document on my computer and type out some goals for myself. The headline will read, “Things To Accomplish This Month,” and spelled out below will be a ton of bullet-pointed items that I would never actually have time to accomplish even if I wanted to. I always assume that if I set the bar super high for myself that it’s a better tactic for success. That is until later that month when I realize that nothing on the list has been achieved… even in the slightest. As we’ll talk about in this article, it’s so important to come up with realistic goals when we’re setting them if we want to actually be successful. That’s just the tip of the iceberg, though. There are countless other tactics to take into consideration when attempting to bring our goals to fruition. That said, here are 13 simple ways to stick to your goals that might make a huge difference in whether or not you’re successful.

If you’re anything like me, when you set goals for yourself sometimes they’re a bit too out of reach. I’ll, for instance, say things like, “I’m going to read 20 books this month,” even though I know that’s not practical. Then, I ended up reading only a mere book or two by the end of the month and feeling frustrated and defeated. The problem here is that the goal wasn’t made in a realistic fashion. According to Mayo Clinic, when developing goals we should remember to keep them within reach, and have them be focused and well planned out.

2. Be Certain Your Goals Fit Into Your Life

On the topic of keeping goals realistic, a major component of this is making sure a goal or goals fit into your life. For instance, if your goal is to travel the world this year, but you have a full-time job and children, the goal might not realistically fit within your current life. Fox News suggested making goals that you know you’ll genuinely have time for in your day. If your schedule simply doesn’t allow for them, they’ll be incredibly difficult to concur.

Got goals? Write them down. According to Inc., this will help you not only clarify exactly what you want to achieve, but will also be helpful in motivating you as well. The outlet cited a Dominican University of California study that found writing down goals, sharing them with a friend, and then sending weekly updates resulted in 33 percent more success in accomplishing goals.

Once the goals are written down, try visualizing them in your head and working through how you’ll make them happen. According to DailyBurn.com, try visualizing, too, how accomplished you’ll feel when the goal(s) are actually achieved.

“SMART” is a method of goal setting defined by Scranton University psychology professor John Norcross. SMART stands for the following: specific, measurable, attainable, relevant, time-specific — and it’s recommended that people follow these points when developing their goals in order to achieve the most success in bringing them to fruition.

6. Set Aside At Least 15 Minutes A Day For Your Goals

Success.com recommended setting aside a minimum of 15 minutes a day for your goal(s) if you want to succeed. The outlet suggested mixing it up, too, so if your goal is be a more positive person, one day spend the block of time reading an inspiration article, and the next spend it with your most positive friend.

7. Repeat Until It’s A Habit

Make sure that 15 minutes we just talked about sticks, as repetition can help make something a habit, according to Huffington Post. The outlet noted it can take between 15 and 254 days for something to become a habit — a huge difference depending on the person and goal — so continue repeating until you think you’ve nailed it.

8. Hang Out With Others Who’ve Succeeded

DailyBurn.com recommended surrounding yourself with other people who are successful in order to help stick to your goals. The outlet suggested that it’s most beneficial if these people are those who are either working towards the same goal(s) as you, or have already achieved the goal(s) you’re aiming to reach.

9. Use Your Social Support System

Sticking to your goals will be a whole lot easier if you’re being held accountable to them by those around you, according to Huffington Post. The outlet noted success is more likely if you’re held accountable by family, a friend, an expert, and/or a support group.

In the same way you used visualization earlier in the goal-setting process, the use of mediation in sticking to and accomplishing goals could guide you to success. Why? According to Inc., mindful mediation when it comes to overcoming a certain behavior, for instance — like quitting smoking — can help you understand why this behavior exists for you and what triggers it in order to make change truly possible.

There’s an app for everything now, or at least so it seems. So, why not turn to some helpful ones when trying to stick to your goals. Entrepreneur suggested several apps that are effective in keeping you on track with goals and even get digital support from friends and family. Some examples the outlet cited include stickK, LifeTick, and Habit List.

12. Tell The World About Your Goals

I tend to dislike over-sharing personal info on Facebook, however sharing with your network some insight into your goal(s) could actually help you stick to them. Think of how accountable you’ll feel to your personal mission when even those people you haven’t seen since high school are aware of what you’re trying to accomplish. Forbes suggested this method as a way to help stick to and achieve goals, as making the intentions public can make a positive difference in the long run.

13. Remain Focused On The “Why” Behind Your Goals

When you decided to embark on the resolution(s) at hand, likely you had a compelling reason why you were doing so. Keep this “why” fresh in your mind, as that emotional element (or “personal hook”) can give you the power to keep on pushing forward, according to WebMD.

As you can see, sticking to your goals does not have to be a grueling process. By using some of these tips, you might find you’re sticking to and achieving many more goals than ever before.