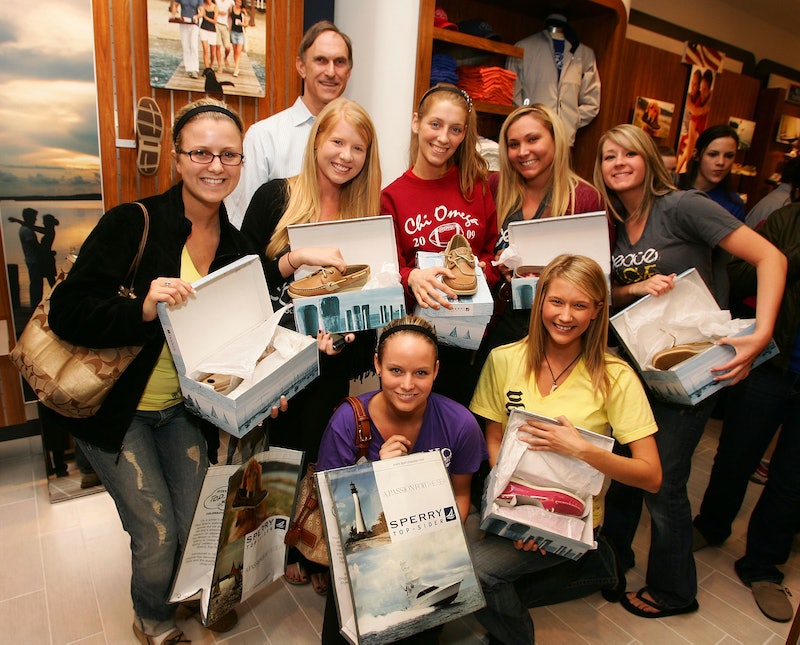 Sorority recruitment has long been used as hilarious fodder for movies. (Hello, House Bunny!) But all too often, crazy hazing techniques aren't confined to the fictional world of film. Reports of real sororities employing humiliating or even dangerous tactics to get their potential pledges ready for Greek life have made headlines, and a 2007 study found that 68 percent of women in Greek life had experienced hazing in their quest to join a sorority. Rush leads to a lot of hazing horror stories, and here are 10 of the worst.

In 2012 Britteny Starling decided to sue the Zeta Phi Beta sorority after what allegedly happened to her during pledge week. Starling claimed she was forced to clean up juice from the floor using her back and act as a trash can for the other girls, taking whatever garbage they had and carrying it in her pockets. Based on her account, it went beyond humiliation, though — Starling claimed things reached a physical level when she and other pledges were forced to stay awake all night without being permitted to use the bathroom. They were also allegedly forced to stand for hours, and when Starling's leg gave out, she claimed a member hit her ankle with a book, "injuring her severely." The emotional and physical trauma eventually culminated in Starling's decision to leave the school.

Neither the school nor the sorority made an official statement about this incident, but their Panhellenic Council website says such behavior is forbidden and classifies hazing as events or activities "that may produce mental or physical discomfort, embarrassment, harassment, or ridicule." It's worth noting that the college no longer recognizes Zeta Phi Beta as an official Greek chapter.

In 2008, sorority pledge Joanne, who didn't wish to share her last name, told ABC News she was forced to stand with her nose against a concrete wall during rush. She said if she or the other pledges moved at all, they had their heads slammed into the brick. Joanne also allegedly had to clean a floor with her fingernails and drink what she described as "pitch black water."

The college's website says they have a strict anti-hazing policy which, if violated, may result in "the imposition of fines, the withholding of diplomas or transcripts pending compliance with the rules or pending payment of fines, and the imposition of probation, suspension or dismissal." The Penn State Altoona college newspaper reached out to the campus sororities following Joanne's accusations. Several members including Lindsey Jordan, president of Alpha Sigma Tau sorority, declined to comment on issues of hazing. But president of Gamma Phi Beta sorority, Alyssa Pulice, said "[I was] beyond shocked because that was during the time of my pledging period. Luckily those things that were said did not happen to me or any of my pledge sisters."

In 2010, a student pledging this New Jersey school's Sigma Gamma Rho sorority landed in the hospital after allegedly being beaten with paddles. The injured student pressed charges and six girls were arrested. The sorority staunchly voiced their innocence, claiming no such event ever happened. In response to the event, Rutgers suspended their chapter of Sigma Gamma Rho, and so did the sorority’s national organization.

A Rutgers student who was friends with the girls in that sorority was interviewed by ABC News following the event. She said "People are just more upset that this girl ratted. Some people actually found out who the girl that ratted is and she will probably be shunned now. They probably won't, like, talk to her at Greek events or anything."

In 2012, alleged hazing at this New York school came to light when students claimed that sorority sisters allegedly threw pledges into a freezing shower while they recited the Greek alphabet, fed them pills to make them vomit on one another, and forced them to hold hot hookah coals in their hands. In response to receiving anonymous reports, the school shut down the Greek system to investigate the allegations and develop a better plan for student safety. After an intensive five-month review period, the school reinstated the chapters after drafting up a new set of guidelines for them to follow. The rules focused on improved communication between the members of Greek life and the Division of Student Affairs.

In 2002, hazing allegedly turned deadly for students Kristen High and Kenitha Saafir. A lawsuit filed after their deaths claims that while the women were pledging Alpha Kappa Alpha, they were required to do hours of exercise and then walk backwards into the ocean. When a wave swept Saafir out to sea, High swum after to help, knowing Saafir couldn't swim. The rough waves drowned both girls. After the event, details emerged that Alpha Kappa Sigma was not sanctioned by the college. A spokesperson for CSU said the school had not even recognized an AKA chapter since 1989, a fact confirmed by the sorority's national headquarters.

This Georgia school came under fire last year when Jo Hannah Burch, who was pledging Gamma Psi, spilled some dirty hazing details. She claimed pledges were taken to the nearby woods where they were forced to crawl through the mud into a freezing creek while being screamed at and spit upon. Further investigation reportedly revealed other forms of pledging torture. Pledges were allegedly forced to stand in a pool of water that the sorority members had defecated in, and to sit naked on a washing machine while any body part that jiggled was circled with a Sharpie pen.

Burch opened up about this experience to the student newspaper advisor Theresa Crapanzano, who, together with another professor Joseph Terry, worked to get the school to do something about the hazing. Crapanzano began writing an article (of which the school refused to allow publication) about the events, and interviewed other students about their alleged hazing experiences. Both professors "held faculty meetings to discuss the school's lack of a discipline policy on hazing." The professors were subsequently fired, and they and Burch then sued the college. YHC spokesman Jay Stroman told Jezebel many of the student reports were "false and outrageous."

In September 2013, Tess Koman told Cosmopolitan about the emotional abuse allegedly inflicted on her and her pledge class during hazing. According to her account, 42 pledges were locked in a basement with only one toilet to use. She also claimed they were frequently asked to line up while the older members would ask the them questions and scold them for incorrect answers, calling them "stupid." She said sample questions included: “Who is the prettiest sister in the room?" and "Which one of us is a lesbian and why do you think that?”

After her article came out Union College responded by has asking Koman's Sigma Delta Tau sorority to put its fall pledging activities on hold. “We don’t tolerate hazing at Union,” college spokesman Phillip Wajda told BuzzFeed. “The column references incidents that allegedly took place three years ago and we are working with the national chapter of Sigma Delta Tau to review the claims."

I was blindfolded with two of my fellow pledges. We were guided into the back seat of a car and one of our future sisters commanded us to chug the alcoholic punch that had been pre-prepared for each of us in individual 64-ounce water bottles. Simultaneously, I was handed numerous vodka shots from the older sister sitting in the front seat ... After what couldn't have been more than a fifteen-minute drive, I was told to get out of the car. I did — but then I lost all consciousness ... I woke up the following morning in the Intensive Care Unit at Dartmouth Hitchcock Medical Center ... I later learned that three other girls had also been admitted, each having overdosed on alcohol due to hazing rituals. Two were fellow pledges, and one was pledging another sorority, Sigma Delta. I had bruises and cuts all over my body, two of my teeth were broken and I was intubated and restrained. The doctor informed me that I had entered the hospital with a .399 blood alcohol content. I soon learned that a .4 BAC is coma and death. I was literally one sip of alcohol away from dying.

Segal admits that even after this incident, she was loathe to blame the sorority or even call the event "hazing." "Nobody had forced me to drink," Segal said. But she also admitted the real reason she didn't point fingers: She didn't want to "incur the social ostracism that would surely follow."

When stories like Segal's came to light, many suggested that Dartmouth overhaul the Greek System to prevent further hazing attempts. University president Jim Yong Kim responded saying, "In places where they’ve gotten rid of the Greek system, it has quickly formed off campus, unofficially. Then they begin to drive and drink, and the level of danger just goes up." He also spoke of how difficult it can be for the school to know of this kind of behavior. "The whole point of hazing is to do it out of the view of administrators and people of power ... It’s just so hard." Professors and people outside the school alike were frustrated with Kim's weak response to serious allegations. But he maintained that he didn't plan to change the fraternity and sorority system. "One of the things you learn as an anthropologist,” he said, “you don’t come in and change the culture.”

Shortly after these allegations flooded his office, he resigned the University position when Barack Obama named him president of the World Bank.

After the publication of this article, John Cramer, Dartmouth's Associate Director for Media Relations, sent a statement to Bustle saying, "High-risk behavior such as drinking, sexual assault, and hazing are problems on campuses across the country and have at times been linked to Dartmouth. It’s important that you know we take these problems seriously and are taking action to combat them."

In 2009, Jasmine Johnson was sent to the hospital after allegedly suffering injuries while rushing Delta Sigma Theta. Johnson says she was punched in the face while vinegar was squirted in her eyes and ice cold water was poured over her head. On another occasion, she claims eggs were smashed on her body while she was punched in the head and stomach, resulting in a concussion and vaginal bleeding. Sorority sister Seirra Smith was charged with assault and arrested after the incident hospitalized Johnson.

UT spokesman Chuck Cantrell said that, in response to the allegations, the school placed a hold Delta Sigma Theta's ability to continue meeting or conducting business. “The dean of student’s office has placed the chapter under a cease-and-desist order, meaning it is suspended from all activities,” he said. “Our campus has a zero-tolerance policy toward hazing. We take reports of hazing very seriously, and we will take all appropriate measures and disciplinary actions to ensure the safety of our students and to punish those who break these laws.”

Though some schools are aiming to crack down on this type of behavior — with schools like Binghamton banning all recruiting practices — dangerous hazing rituals will continue to go unpunished if they stay secret. What happens during rush shouldn't remain a secret if it's life-threatening, humiliating, or illegal. Only awareness can bring an end to this issue.