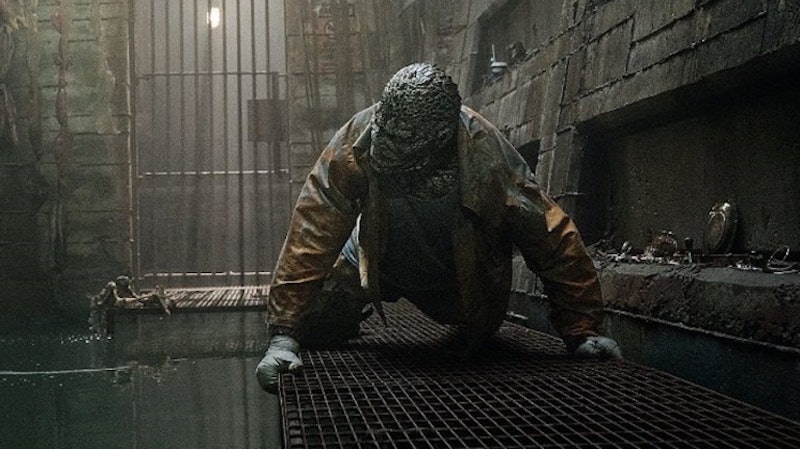 One of the most alluring aspects of David Ayer's Suicide Squad is the sheer amount of superheroes the film showcases. From Batman to The Joker, Harley Quinn to Deadshot, and Katana to El Diablo, these characters are as entertaining to watch (or so the trailer promises) as they are diverse. But these DC Comics creatures aren't Avengers — they are quite the opposite. All villains in their own way, the Squad is a band of misfits and evil-doers, but when I visited the set of the film in Toronto in June of last year, I learned that even villains can be worth rooting for.

Sitting down with Adewale Akinnuoye-Agbaje, who plays Killer Croc in the film, he explains how all of the characters are extremely layered. Sure, they boast impressive weaponry and bad attitudes, but none of these bad guys are 100 percent evil, especially Killer Croc. "You’ll see that the layers come out in Croc. We’re not about just making this beast. We’re making a being," the British actor says. "He’s tortured and abused from his childhood. He’s always been ostracized and ridiculed for how he looks. What he’s done is embrace that. Instead of saying ‘I’m ugly’, he’s says ‘I’m beautiful’. Instead of going underground as if he’s hiding, he says ‘this is my kingdom’."

And luckily, I get to witness first hand the kingdom that Croc mentions. After a tour of the sets and meeting some of the other cast members, I'm given a headset and a seat in front of Croc's subterranean seclusion. It's dark, wet, and utterly depressing. A narrow channel of water that looks like an underground sewer system. In this scene, I watch Killer Croc pace in his dank, watery cell. Then suddenly, a trap door from the top of his chamber opens, and a whole, dead goat, is dropped into the murk. Dinner time.

"He's very primal, carnal," the actor says. And these traits are apparent in the scene. But there's something else. When looking closely, I notice small figurines lining his cell. They are sculptures of cats, and now I'm utterly confused. Killer Croc: villainous murderer and cat enthusiast? According to Akinnuoye-Agbaje, that's exactly right.

"Those felines, those are his brethren," the 48-year-old says. "He’s making sculptures that reflect that. It may be a pet that he may have had when he was a child. He may sculpt people that he’s taken down as symbols or trophies. He’s very creative. Again, another aspect that you’re going to see in him. Just when you think you’ve got him pegged, he does something very surprising and makes these beautiful sculpted pieces. It’s a testament to the gentle, creative side of him. David [Ayer] is very much about bringing that out and juxtaposing it with the visceral, viscous, barbaric creature that he has to be when he needs to be."

It's a beautiful sentiment. Just like Killer Croc, people are multi-layered, multi-dimensional, and can rarely be defined by a singular trait. As his name states, Killer Croc is indeed a killer, but he's also a tortured soul and an artist, and surely other things as well.

But to get in the mindset of the crocodile side of his persona, the actor spent time with real life crocodiles. "I went down to the everglades in Fort Lauderdale, watched the gators down there, spent hours videoing them, went in the ring with them." I'm sorry — what?! "You can actually go in there. It’s really not that dangerous. But just to touch them, and feel them, and actually feel the texture of their skin, and the blood flow through them — its actually quite soft, especially on the belly."

But the crocodiles' surprisingly smooth underbellies wasn't all Akinnuoye-Agbaje was looking to investigate. "I studied a lot of video on how they kill. You’ll see in the movie, we’ve got these great signature moves, where he latches on to his prey and they twist. We’re doing that not only on the ground but in the water. If you see crocs, they can be quite slow and sluggish but the moment they move its very surprising how fast they are."

Just like Jared Leto, who isolated himself from the rest of the cast during filming to aid his character of The Joker, Akinnuoye-Agbaje also kept his distance from his castmates. Because Killer Croc lives below the earth, and has little interaction with others, the Akinnuoye-Agbaje wanted to do the same, but it didn't come without a price. "It’s very tough because we’re all friends," he says. "But I wanted to create that environment on the set where they’re weary of him and they don’t know if he’s going to bite them. I mean [the cast will] walk in a scene, and [Croc] will jump over the car and come down as opposed to just walk the street. So they’re always like, 'What? What’s Croc going to do?' That’s been the hardest part, not being able to party with my squad. But it creates a dynamic between the squad that I think is important and the audience will get. But at the end, we’ll party."

If Killer Croc is as multi-dimensional as he seems, I can't wait to see what surprised the rest of the Squad has hiding up their sleeves. The Joker: psychopathic killer and closet quilter? Well, maybe.