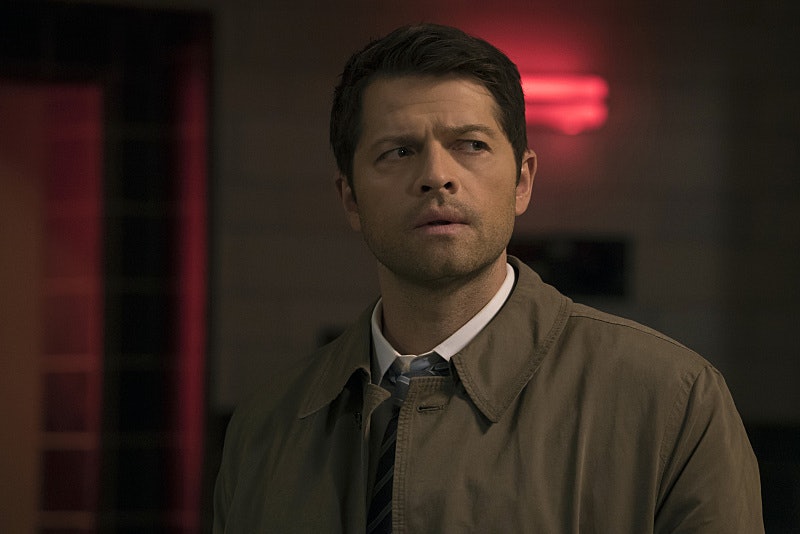 There's no doubt that Supernatural Season 11 was one of the best seasons to date. With the return of Lucifer, the rising of Amara, the reveal of Chuck as God, and everything else Sam and Dean encountered throughout the season, it definitely delivered. I can only imagine what Season 12 is going to bring, especially with the Season 11 finale teasing the resurrection of Mary Winchester and the possible shooting of Sam by Lady Toni Bevell (played by The Vampire Diaries' Elizabeth Blackmore). Luckily, Misha Collins shared Supernatural Season 12 scoop, while chatting with Bustle over the phone.

"Um, no, I have no idea what's going to [come] in Season 12," Collins says laughing after being asked what it's store for next season. He says at some point next week, he will be chatting with the writers room. "I know that they've been chipping away at the story for Season 12 already," he says of the writers. "But, they have imparted exactly zero information on me. So, I have no idea what's coming."

Even though Collins appears to know nothing about Season 12, he did drop one piece of information that will surely interest fans. "I know one casting thing," the 41-year-old GISHWHES (The Greatest International Scavenger Hunt the World Has Ever Seen) creator admits. "I know one person who's been hired in Season 12, but I can't tell you. I'm sorry to be completely useless there, but I do know that their character is going to be on the show." I have a feeling fans are dying to know who it is, but, sadly, Collins remains quiet.

Like myself, I'm sure fans are thinking it just might be Samantha Smith, who played (plays?) Mary. Seeing as she supposedly returned from the dead in the Season 11 finale, there's a good chance she'll be back as a recurring character or in a full-time capacity. Or, it could very well be Lucifer. If you recall, Amara ejected Lucifer from Castiel, but God's favorite angel's whereabouts were never revealed. Is he back in the cage? Did he find a new vessel?

Unfortunately, Collins doesn't know the answer to that, but he teases, "There was a point in which in an earlier draft — of the season finale — where that question was answered, but that didn't end up making it into the final cut." Clearly, that leaves the door open for Lucifer. Maybe he'll return to Season 12? If so, let's hope Mark Pellegrino comes back, as well.

As for Castiel, Collins has a vision for the angel that he would like to see come to fruition in Season 12. He says,

I guess one thing that I've been hoping a little bit is that we can revisit Season 4 Castiel a little bit ... The writers keep inhibiting Cas' powers in some way or another ... Sam and Dean don't have this magic bullet they can solve all their problems. I would love it if there was a little stretch where he could possibly be the powerful ally that he was and just play it a little bit before somehow hobbling him again. It's been awhile since Cas has been just the ally at full power that he once was.

Whatever is in store for Castiel and Season 12, keep those fingers crossed that it's as good as Season 11. With that, I leave you to theorize about all of Collins' teases.