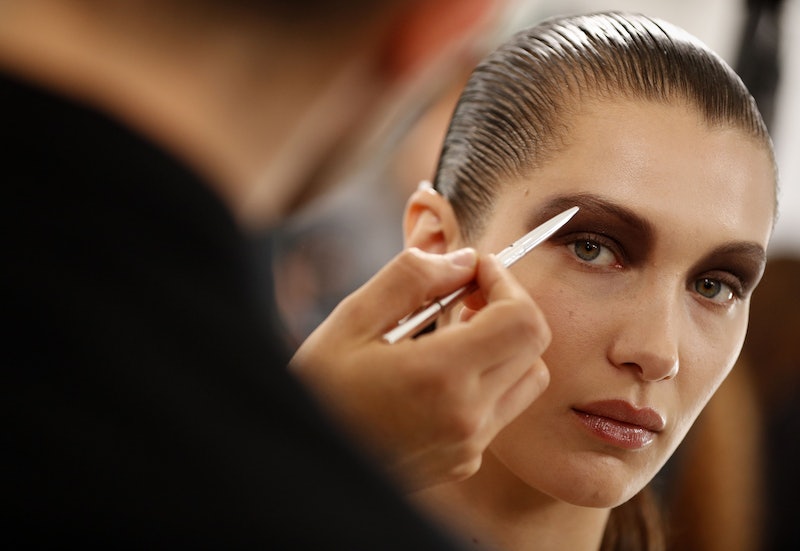 Just when you thought the makeup trend was was kind of dead, according to MTV, Bella Hadid said contouring is her favorite in a YouTube video posted by Dior. So get ready to brush up on your contouring skills again, because this trend is not going away.

Non-touring has been the beauty trend of the moment, making us all think that contouring had seen its day, but Dior just posted a backstage video from their most recent cruise show, featuring Bella Hadid, and in it, she reveals contouring is her go-to makeup technique.

The video walks us through the process to create Hadid's makeup for the runway show last week, and when the makeup artist, Peter Philips, says that he's going to contour, the model announces that it's her "favorite." And for good reason, because I mean, she looks insane with those cheekbones.

But no worries if you've totally jumped on the non-touring bandwagon. Such chiseled features aren't necessarily right for an everyday makeup routine, and in all fairness, this was a runway show, so naturally, the more drama the better. Non-touring can totally stay in your everyday routine, and reserve the contouring for more special occasions. Because I mean, having to choose between one or the other isn't fair. Seriously.

This video will teach you how to recreate Bella's look on those occasions when you're totally down with contouring.

Curious what other tips she swears by? Check out a few of Bella's other beauty secrets.

1. She Doesn't Wear A Lot Of Makeup

Contouring may be her favorite on the runway, but Hadid told theOutfit that she prefers to stay more natural in her everyday routine. "On shoots they pack so much makeup on your face so when it's over, I just take it all off, it doesn't even matter where I'm going," she said.

2. She Sticks To The Basics

When she does wear makeup, she keeps it simple. "All you need is eyebrow pencil, bronzer, and mascara, and you're good," Hadid told Allure .

3. She Keeps Her Skin Hydrated

Bella uses this moisturizer to keep her skin fresh and dewy.

4. She Uses A Liquid Highlighter

A liquid highlighter gives your skin a little glow, without making it look too shiny.

5. She Covers Blemishes With A Creamy Concealer

Hadid's makeup artist covers up any blemishes with this concealer that comes in two shades to create a more natural match to your skin tone.