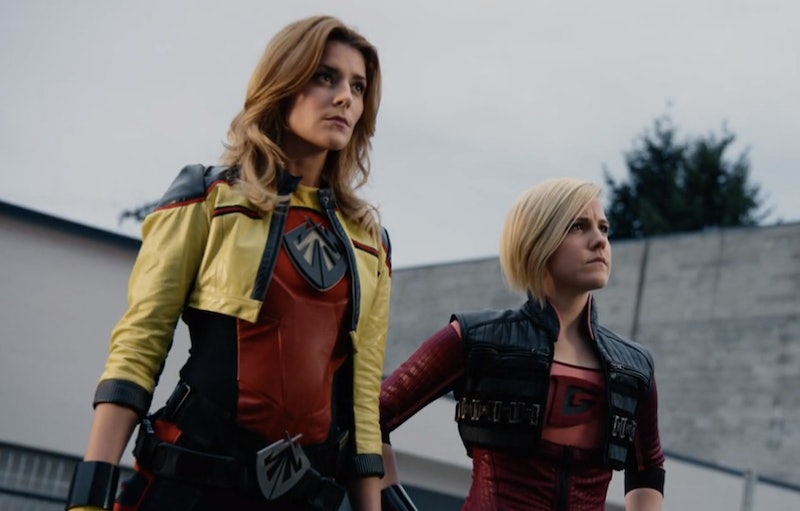 Queens of the internet and YouTube rockstars Grace Helbig and Hannah Hart kick some serious ass. No, literally. The two BFFs geared up — spandex and all — to recreate the ‘70s show Electra Woman & Dyna Girl in their first stab at movie acting. Let’s just say their way with a gun in the reboot is as fierce as their on-point comedic timing. Millions of Internet users all over the world idolize these two, and those fans are about to get a serious dosage of badass-ery. But even though they’ve climbed their way to Internet fame, and have all of those millions subscribers who would die at the chance to breath their same air, they’re allowed to be fangirls, too. The dynamic duo revealed just how hard they have, and would, fangirl out over their real-life superheroes. Who are both women, by the way.

I think Hart’s idea of a “superhuman” is one anyone with a pulse can generally agree with. “I mean, Oprah, for sure,” says the 29-year-old. “Unreal.” And her reason for idolizing the queen is hilarious. “Oprah lives on like a farm or whatever, she’s going out for crops and it’s like, wow, you’re nailing it. Those avocados, she loves ‘em.”

She has no shame in admitting that if she ever got the chance to meet Oprah, she would totally lose her chill. “I would cry. I feel like I would be suddenly compelled to weep,” she says. “I would run away because I would be too afraid of making the wrong first impression that I would continue to not say anything. I would weep and say: ‘Thank you, Oprah. Thank you.’ She gets that all the time. I’m one of many, I don’t care.”

I have no problem relating to and believing her with every cell of my being. Little did I know, there’s a video out there on the Internet of Hart reacting to Beyonce making her entrance at a 2013 concert. Thank you, Grace, for telling me about this amazingness. The next one minute and five seconds need to be dedicated to watching her reaction in this video. “If I met Beyonce it would be like on. I have a huge crush on Beyonce, let’s be real,” Hart says of Queen Bey.

She wasn’t the only one who survived an out-of-body experience from being in the presence of a celeb. Helbig tells Bustle about an iconic singer who kind of changed her life at this year’s Billboard Music Awards. “I feel like I really appreciated Celine Dion on a level that I had yet to come to really appreciate her,” the 30-year-old says. “She won the Icon Award, there was this creative package of Celine, how she built up her career and how much she gave back in a philanthropic way. I just loved it and thought she was wonderful.”

Keep in mind, this was in the aftermath of the death of Dion’s husband and brother, which were just days apart. I cried from the photos of Dion at the BBMAs alone. “That’s a moving moment and so unexpected that I felt so delighted by her, so inspired. At this moment in time I just think she’s a great human being. Here’s hoping no scandals of her come up.” Even so, would anyone even care?

Even though the two are inspired by fellow females, they don’t deny that men are equally as capable of being superheroes to others. “I don’t think that it’s a competition,” says Hart. “Unless one is good and one is bad.” Helbig further explains why amping up the fact that the two are females wasn’t a concern or priority when making Electra Woman & Dyna Girl. “In terms of gender and the identity of superheroes, I think it’s mutual,” she says. “That’s the cool thing we set up doing [the project], was to make it a series that was at the core, superheroes being superheroes and they happened to be female and they enjoy each other’s company and [are] authentically friends.”

The testosterone commonly witnessed in superhero flicks is absent in the film, but this wasn’t the point the two were trying to prove with it. “It’s a funny comedy, just about two superheroes who move to LA and make it big,” says Hart. “It’s not more complicated than that.”

Still, without saying it, the two prove that the ladies are just as capable as saving the day as the fellas, and that, I can appreciate.

More like this
Amanda Gorman Shared A Powerful Message On Meghan Markle’s Penultimate Podcast
By Darshita Goyal
Keke Palmer Finally Showed Angela Bassett Her Famous Impression Of Her
By Stephanie Topacio Long
You Definitely Know The Voice Of Shuri's AI In 'Black Panther: Wakanda Forever'
By Brad Witter
Jodie Turner-Smith & Joshua Jackson's Relationship Timeline Includes Her Proposing
By Jake Viswanath
Get Even More From Bustle — Sign Up For The Newsletter