Seth Meyers really took the interviewing plunge Tuesday night when Late Night with Seth Meyers welcomed Kanye West. West has got to be one of the most intimidating talk show guests because he tends to speak in monologues and not leave much room for questions. None of this happened during the interview with Meyers and I'm not sure if the credit goes to West feeling calm this day, Meyers' interview skills, or simply the fact that they'd already met during West's appearances on Saturday Night Live. Either way, the interview went smoothly, but there were still some very Kanyesian moments.

For instance, when Meyers asks if West will start making kid-friendly songs now that he's a father ("Will you be the new Wiggles?"), instead of laughing it off, West gives a very serious answer. "I think artistic, intellectual, kid-friendly songs… I mean, if you go to Europe there's nudity on TV." He goes onto make a good point that asking him if he'd stop using cursing in his music is like asking Quentin Tarantino if he'd make a G-rated movie. West compares himself to a lot of people, and they aren't all apt, but this one works.

The most confusing part of the interview was not West making the jump from kid song to European televised nudity, but rather a sketch that Meyers claims was from a 2007 episode of SNL. Meyers says that when West was there as musical guest, he suggested a skit where he would interrupt speeches at various award presentations including a state fair best pumpkin contest. Meyers shows the pumpkin contest clip and this seems totally normal —West just wanted to make fun of the Taylor Swift thing, right? — until you realize the Taylor Swift VMAs incident was two years later in 2009. 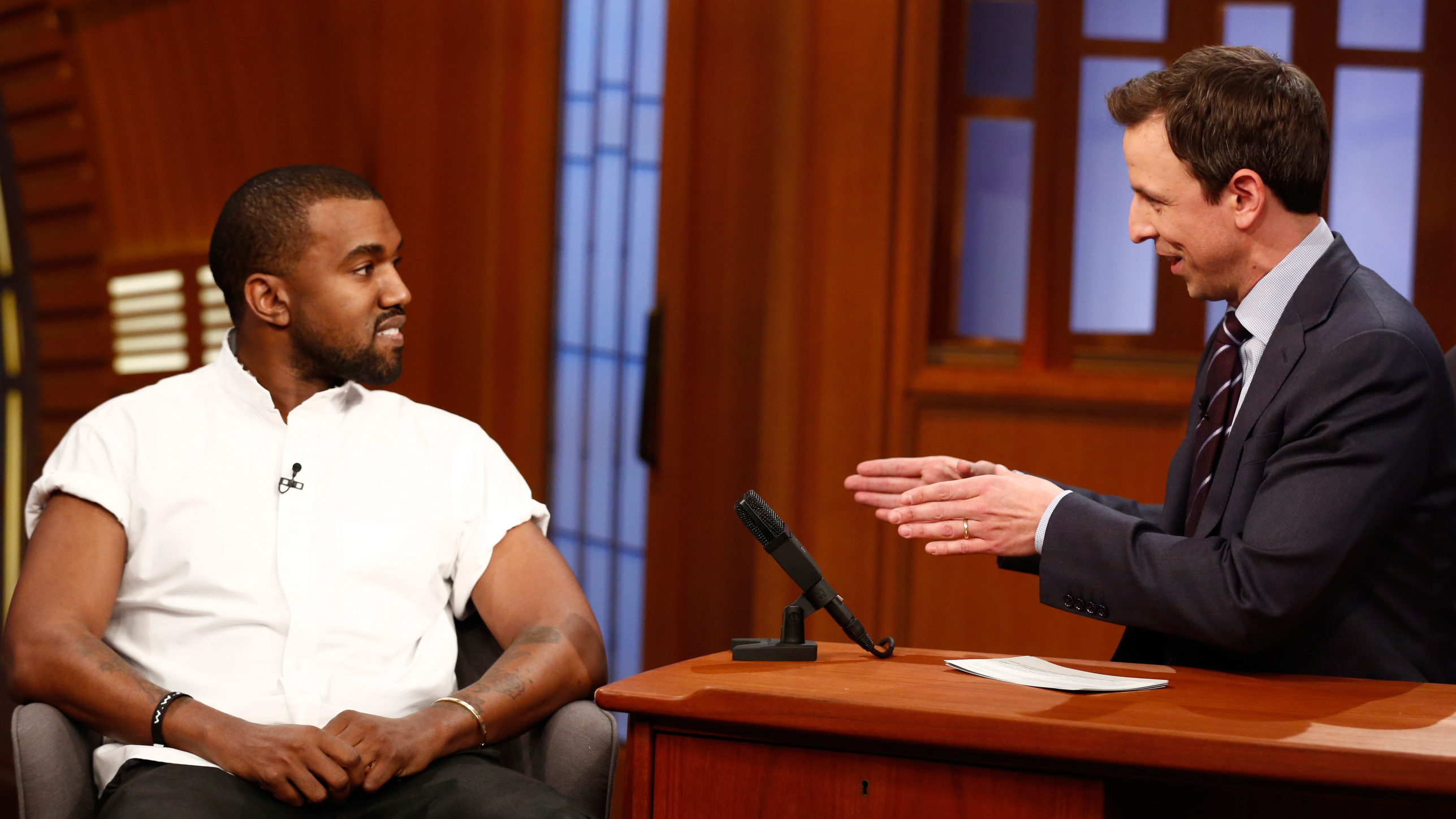 So what's going on? Was it created specifically for Late Night? That seems plausible to me, but Vanity Fair suggests that it's real and actually was created in 2007. Complex and the Today show's website both say that he was making fun of the Taylor Swift moment clearly ignoring the dates given. Seth Meyers starts to say after the clip, "The craziest thing…" but then moves on to another point. Was he going to mention that this was before Taylor Swift? How do you explain Will Forte being in the sketch? Why was it recorded if it never aired? It was just a recorded dress rehearsal? What's going on?!

I still think it's fake. I think it must be. Right?! Is Kanye West a psychic? Did Kanye West get inspiration from the skit to rush the VMAs stage?

The interview ends with no more mention of the sketch and West concludes with another Kanyesian thought. He says he doesn't care about cameras and the reason he does talk shows is because, "I care about history. I care about people. I care about you guys getting the best product possible."

Update: A kind reader brought to our attention that Kanye West also crashed the stage when Justice won an award at the MTV Europe Music Awards in 2006. This was the event the skit was parodying.