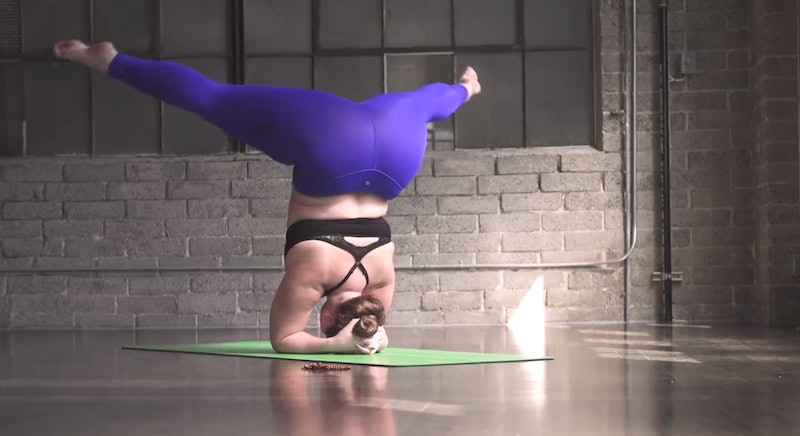 When you picture a yoga teacher, an incredibly particular image probably comes to mind: A straight size man or woman who reflects our culture's arbitrary beauty standards. However, a recent video featuring plus size yoga teacher Dana Falsetti challenges these notions, reminding us that "fitness" isn't just one thing. According to Mic, the two-minute video profiling Falsetti's journey from early body image struggles to acceptance and love of her body was posted to the fitness app Cody's Facebook page on Monday, and it's already been viewed more than six million times.

In the short video, Falsetti explains that she used to idealize the prospect of losing weight, to the point where she expected it to change her life entirely. "You lose 100 pounds [and] you sort of expect to feel like a different person," she says. "And I really didn't. ... I lost the weight and then it still didn't matter."

"[That realization] causes a huge paradigm shift," she says in the video. "It started getting me to question — what are all the things in my life that I've wanted to do, or that I'm passionate about, or that would make me happy, or that I haven't been doing just because I told myself I couldn't?"

Interspersed with her interview are shots of the yoga teacher, who creates videos for the Cody app, in magnificently bendy yoga positions. And rather than viewers being discouraged by her athleticism, Falsetti hopes people are inspired by her example. "Just seeing someone who looks like you doing something you don't think is possible can be the thing that sparks the entire journey toward a more positive lifestyle," Falsetti says in the video.

In addition to millions of views, the video has been shared more than 100,000 times, and thousands of users have left comments praising Falsetti for adding much-needed body diversity to the world of yoga. Many comments appear to have been left by people who also struggle with body image.

"Practicing yoga made me realize that it is not really the release of weight that matters, but the journey of discovering myself more. ... Hats off to you, Dana Falsetti, for inspiring us," reads one comment.

Another noted the importance of seeing someone like yourself leading a yoga class. "I would love some yoga or other exercise instructors to look more like her. ... I would feel much better with someone like her leading the instructions," wrote another user.

Falsetti is hardly the only plus size fitness instructor out there, but she's one of few to garner widespread attention. Although mainstream representation of people who are plus sizea is improving, larger figures often remain overlooked in favor of those who fit more traditional (and totally subjective) "ideals." Judging from the overwhelmingly positive reaction to Falsetti's video, however, there's an audience ready and waiting to see people like themselves represented in the fitness community. Check out the full video below: