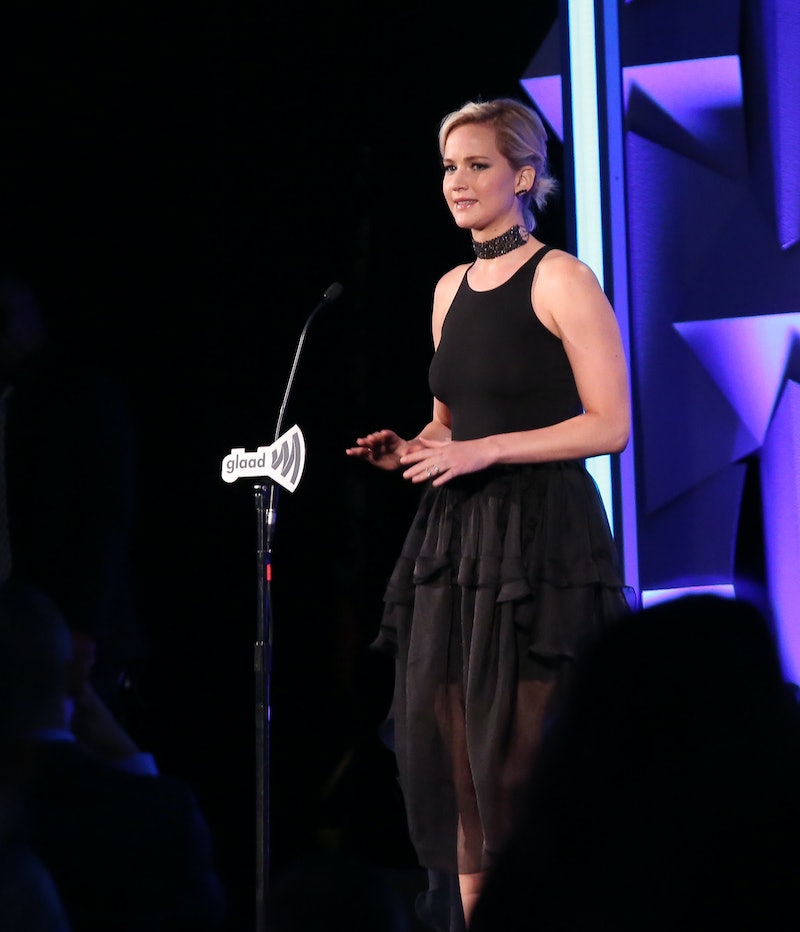 I'm calling it now: Get ready for Jennifer Lawrence to take her most intriguing female character yet. Sure, she’s portrayed superheroes and fantastical heroes who inspire entire revolutions, but nothing compares to the character she’s set to play next. Because, this time, the woman she’s playing is real. On Thursday, Variety reported that Jennifer Lawrence will star in a film about Elizabeth Holmes, the founder of the medical services company Theranos.

If you don't know Holmes' name, trust me: You certainly know who she is. Up until recently, Holmes had been declared by Forbes to be the richest self-made woman in America — that is, until her company, Theranos, was accused of delivering false test results, as CNN reported in May 2016. The role of Holmes will be different from other characters Lawrence has played in the sense that, while many the others have lived in period pieces or fantastical worlds, the woman that Lawrence is taking on next is a woman who has climbed her way to the top in the real world, and is in the middle of experiencing a fall from grace.

Not many can compare to the power that, for a long time, Holmes wielded. Until recently, Holmes’ net worth was valued at $4.5 billion. Forbes downgraded Holmes' portion of the company from $4.5 billion to zero dollars in June following the controversy, but she was once very much on top of the world.

Talk about the stuff that movie dreams are made of. Especially the movie dreams belonging to Adam McKay, who won an Oscar for his work on The Big Short. McKay is reportedly signed onto the project to write, direct, and produce it as well.

With these two Hollywood powerhouses reportedly signed on to the project and with Lawrence ready to take on yet another powerful character, I’m counting down the days until this project is picked up and starts production.