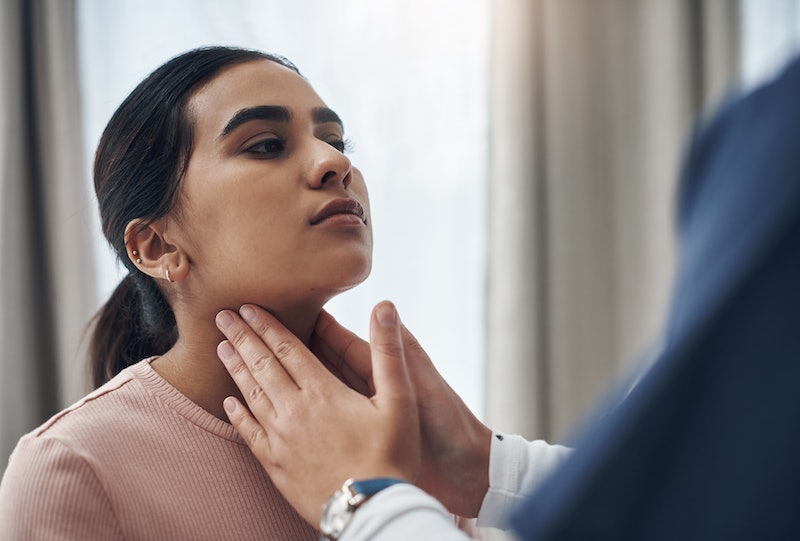 Let me introduce you to one of the weirdest bits of the human body. Lymph nodes, or lymph glands, are a key part of the body's immune system for fighting illness; they're small pea-shaped protuberances at various points in the body, linked by the lymphatic system. When one of them swells, it's filling with lymph fluid, a combination of white blood cells and a protein substance called "chyle," specifically to fight off some immune system issue. A swollen lymph gland or node indicates that something's gone a bit awry, so you need to know how to "read" these lumps and what they're telling you about your body.

Lymph nodes can respond to site-specific problems or to body-wide issues. The most commonly obvious lymph nodes are the ones around the throat under the jaw, which can swell in response to throat conditions and colds; but you've also got lymph nodes under the arms (these are the ones that will often be tested for cancerous spread if you have breast cancer), behind the ears, in the groin, and at the very back of the head under the base of the skull. It's worth giving them all a feel when you're healthy to know what a "deflated" lymph node feels like, so that you can properly assess whether one is swollen or if it's just its normal size and shape. They'll also likely be tender as they swell, and it's a good idea to note their texture; are they hard, or soft?

So if your lymph nodes have started inexplicably popping up like tender mushrooms, here's what that might mean.

1. You Have An Infection Or A Common Virus

This is the most common cause of swollen lymph glands anywhere on your body: they're fighting something off. (After a bizarre weekend in which every lymph node on my body decided to puff up like a toad, I went to a doctor in complete confusion, and she assured me that it simply signals the effective functioning of the immune system, likely against something like a bacterial infection or a virus.)

Nodes will swell with lymph fluid in response to a wide variety of invasive problems, from a cold to measles and chickenpox, STDs, staph, or any kind of infection. (Viral infections are distinct from bacterial infections in several ways: bacteria are celled organisms that can survive without a host, while viruses are extraordinarily tiny and dependent on cells to survive. Bacterial infections can be targeted by antibiotics, while vaccines are often the only possible treatment for viruses. Do not demand your doctor gives you penicillin for the flu virus.) The normal recommendation for swollen lymph nodes due to infections is rest and fluids, as well as any disease-specific treatments. They'll go down on their own as the body successfully fights the issue.

This is an interesting one that's specifically related to gland issues. Infectious mononucleosis, otherwise known as mono or glandular fever depending on your country of origin (doctors in Australia and the UK will likely look at you strangely if you come in asking if you have mono), is spread via saliva and air dispersal, so you can get it from kissing, shared cutlery, coughing, and so on. It's actually caused by something called the Epstein-Barr virus, a member of the herpes virus family (now that would be a depressing family reunion), and many of us encounter it early on in life.

The name "glandular fever" is given because one of the most obvious problems with mono is a large swelling of the lymph glands, as your body produces a whopping amount of lymphocytes to cope with Epstein-Barr. Glands aren't the only sign of mono, though; you'll likely also have a sore throat, severe fatigue, and a very tender, enlarged spleen. (Spleens are part of the immune system too.) The sequence of events is careful to note here: the flu-like symptoms will likely come first, followed by significant swelling of lymph glands a few days later.

If you do think you have mono, stop kissing anybody, and get yourself to a doctor for a blood test diagnosis. Unfortunately there won't be anything particularly targeted that they can do beyond mediating the symptoms until it clears your system.

Swollen lymph nodes are a particular cause for concern in pregnant women, because they may be an indication of toxoplasmosis, a kind of bacterial infection caused by the bacteria Toxoplasma. Though you can get toxoplasmosis through ingesting contaminated meat or water, one of the most common ways of getting it is through contact with cat feces (accidentally swallowing small particles of it, to be specific): if you're in charge of cleaning the cat's litter box, it's highly recommended that you stop immediately once you get pregnant. Pregnant women who contract toxoplasmosis are at particular risk of passing the illness onto the fetus, and accidentally cause miscarriage, birth defects or death, so anybody at any stage of pregnancy with swollen lymph nodes needs to get to their GP immediately to rule out the possibility.

This is a rare one, but it may be familiar to people with anxiety disorders or a propensity to have panic attacks. There's a certain kind of circular problem in various kinds of psychologically diagnosed anxiety, particularly those associated with illness anxiety disorders (what we call "hypochondria"), where anxiety lowers the functionality of the immune system, leads to minor viruses or infections, swells the lymph nodes, and therefore leads to more anxiety as the person panics about their ill health. The capacity of excessive anxiety to suppress the immune system is a well-known phenomenon, but swollen lymph nodes aren't among the primary physical signs of anxiety in the body; they're a possible consequence, not a symptom.

If you catch yourself desperately worrying about your lymph nodes and finding that they're fuelling a circle of anxiety, contact your GP and update them on the situation; you may need some anxiety-specific therapy to help you out of the spiral.

Let's get this out of the way: it is not likely that a single swollen gland is a sign of lymphoma, a cancer that affects certain lymphatic white blood cells and collects in the lymph nodes. (That's a rough description. There are two main types of lymphoma, Hodgkin and non-Hodgkin, and there are up to 60 subtypes of non-Hodgkin lymphoma, so we're not exactly talking about a uniform disease here.) Non-Hodkin lymphoma, the more common type, only accounts for four percent of all new cancers in the U.S. every year, and your risk of getting it is about one in 50. So don't freak out.

You're not going to be under consideration for lymphoma unless you have inexplicable swollen lymph nodes, with no apparent underlying condition, for several months at a time. And they'll likely be accompanied by other nasty symptoms: night sweats, unexplained weight loss, bizarre itching, and fatigue are among then. The swollen lymph nodes themselves will likely be painless. So don't take a week of swollen glands along with some sneezing as a sign that you've got cancer; chances are they're just doing their job.