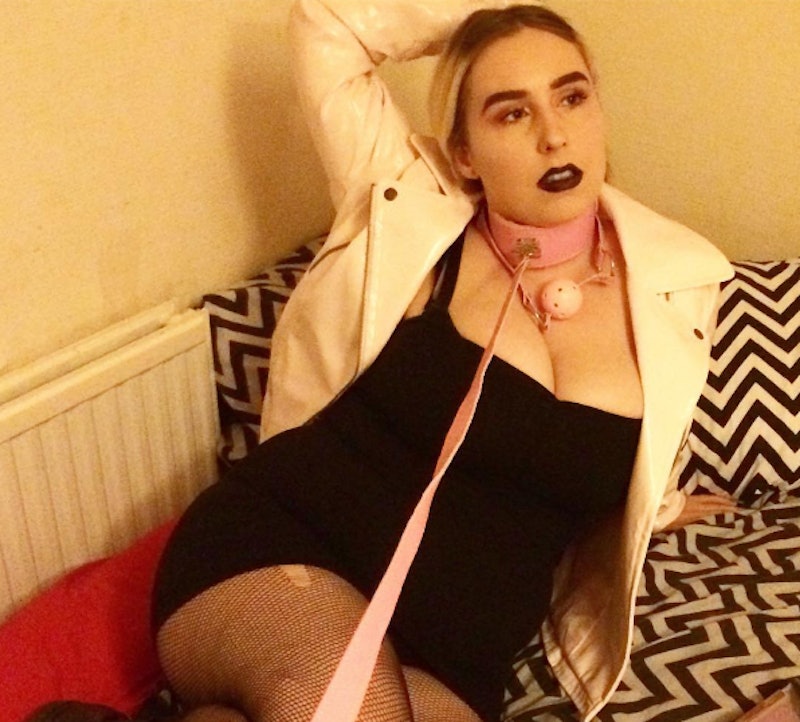 For many, 2016 has already been the hardest when it comes to losing musical icons and personal heroes. Following the deaths of David Bowie and Prince, it's been easy for me to reflect on how feminine male musicians impacted my life. From something as seemingly simple as my style to the exploration of gender politics, it's become clear to me that I owe a lot of my femininity to men. It's a statement that, without knowing the men I partially attribute my femme identity to, might easily read as patriarchal — but is actually anything but.

This isn't to say that I was a massive tomboy only to then discover Ziggy Stardust and realize glitter was my one true calling. I've been feminine — almost obsessively so — since childhood. Pink, pretty, fluffy, or Barbie: They were all for me. Continuing with the bubbly and blonde bimbo aesthetic into adulthood has been a specific choice I've made. I view it as commentary on female tropes and on embracing femininity in a way that other eras of feminism have eschewed.

Although this adoration of all things "girly" comes from within (and from the women I surround myself with), the truth is that from a pop culture standpoint, a large proportion of my femininity also comes from male musicians. What makes this revolutionary and not reductive, however, is the specific male musicians I owe my style to: Many of whom were emo.

With one David Bowie tattoo and another on the way, it would be easy to turn this into an ode about how David Bowie affected my style. But in reality — while admittedly underrepresented on my body — the discovery of an entire musical movement impacted me long before I bothered to recognize Bowie's gravitas.

The culture of emo saved my life in ways much more meaningful than style. But for now, I'll focus on that. The sense of community I found both in emo music and emo fashion made me feel a sense of belonging that was missing in my tiny Welsh hometown. But on reflection, the emo stars of my youth — and in particular, Gerard Way — affected the way I see men and saw myself long before I really understood what feminism meant, let alone gender politics and femme/masc identities.

Of all the emo musicians that I looked up to — Brendon Urie, Ryan Ross, Pete Wentz, Frank Iero — Way stood out among the rest. After recently coming out as genderqueer and often having deep and honest discussions with his fans on Twitter, Way continues to inspire me despite the unfortunate fact that My Chemical Romance has stopped making new music. But during the era of Three Cheers For Sweet Revenge, the singer introduced a generation of teenage girls to the empowering nature of both androgyny and femininity.

These men sang about their emotions and made out with each other on stage, all while rocking long hair, tight jeans, and plenty of makeup. They have long stood up for queer kids and represented the outcasts, playing with the gender binary in both style and performance. From the ages of 12 to 15, I was immersed in this decoding of the feminine and the masculine, even if I couldn't yet understand what it all meant.

Although I had grown up with the music of Queen, David Bowie, and Prince, I had never paid it much mind until that point. It was my parents' music, after all. The music of a different generation; music that didn't apply to me. That is until, as I remember vividly, my mom turned a mother/daughter day into a musical education. Or rather, a Bowie education.

While I think it's wrong to reduce icons like Bowie, Freddie Mercury, and Prince to their aesthetics alone, the powerful nature of their presentations was as much a part of their performances as their music. By presenting themselves as unapologetically queer, as androgynous, and as feminine, these musicians carried the art of gender performance through the decades and helped keep the conversation relevant through time and through music.

By recognizing the impact of feminine-presenting male musicians on my femme identity, I feel empowered. "Feminine" and "masculine" aren't as set in a solid binary as they may seem; and that's an idea I only hope to see perpetuated more and more. As the films Rocky Horror Picture Show and Hedwig And The Angry Inch also prove, effeminate men fighting against the mainstream while fiercely representing the importance of playing with gender are invaluable.

The truth is that although my femininity is pushed to the nth degree — to a fierce, fat, fabulousness that exaggerates stereotypical female expectations in both beauty and gender — I would never have learned the performative quality of gender without the aid of men.

Outside of my personal relationship with these characters and caricatures of femininity, masculinity, everything in between, and beyond, it's fascinating to consider the importance of these effeminate men on others. I'm left wondering why, in a society that seems obsessed with keeping the male and female so different and conforming, our legends — both living and dead — are so often those who played with and performed gender in ways that actively fought against the norm.

This isn't only food for thought, but fuel for the fire against traditional standards of beauty and gender. In a world in which femininity can still lead to judgment, to danger, and to marginalization, effeminate men will continue to inspire me.