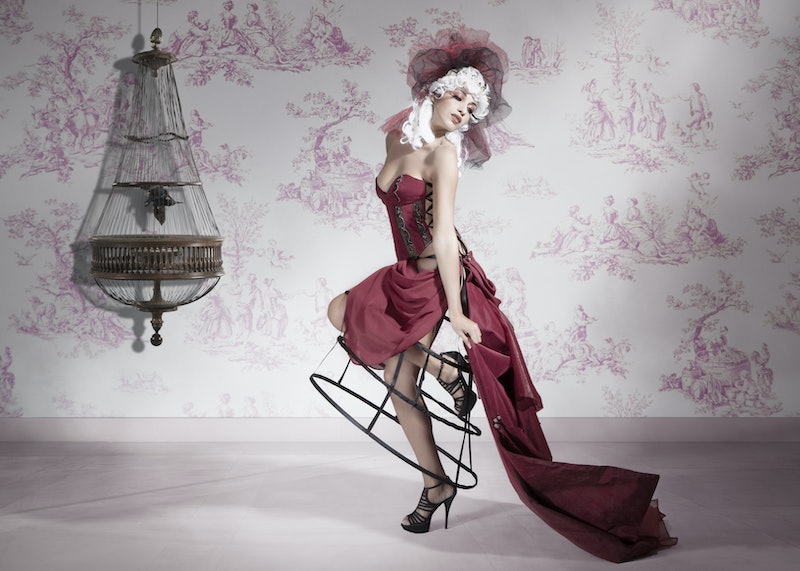 I’ve been experimenting with makeup for as long as I can remember, from ridiculous eyebrows for a Cruella de Vil costume in elementary school to stealing Mary Kate and Ashley eyeshadows from the big supermarket — all before the age of 11. For a lot of people, this was considered far too young for me to be wearing cosmetics. But for me, makeup was never a tool for making my skin looked Photoshopped (although that can be ace — thanks Estee Lauder), but an art form.

My mother doesn’t have eyebrows until she expertly draws them on in the morning — that’s art. I can cover myself in glitter and call it my "look" — that’s art. A person can put on their makeup in the morning and feel confident and beautiful — that’s art. To the rest of the world, to the "lads' mags" making accusations of "lies via concealer," makeup is either a falsehood by women that misrepresents how they "really" look or it is a patriarchal construct produced solely for capitalist gains and female disempowerment. No matter which way we turn, those who wear and enjoy makeup are told they are vapid for applying it on their faces (or anywhere else for that matter).

"Fashion is one of the very few forms of expression in which women have more freedom than men. And I don’t think it’s an accident that it’s typically seen as shallow, trivial, and vain. It is the height of irony that women are valued for our looks, encouraged to make ourselves beautiful and ornamental… and are then derided as shallow and vain for doing so. And it’s a subtle but definite form of sexism to take one of the few forms of expression where women have more freedom, and treat it as a form of expression that’s inherently superficial and trivial. Like it or not, fashion and style are primarily a women’s art form. And I think it gets treated as trivial because women get treated as trivial."

As the niece of a makeup artist and the daughter of a woman who has a chest of drawers full of every eyeshadow palette Urban Decay has ever produced, it’ll be obvious that I’m arguing for the importance and revolutionary nature of makeup and feminine fashions. Yet, although it is undeniable that the beauty and fashion industries evolved out of sexist expectations of women — women haven’t even been shaving for 100 years yet, as the female "need" to shave was invented by razor companies to continue sales whilst men were at war — it is small minded to assume that because a mode of expression was created as a tool of oppression, it cannot be re-appropriated by the oppressed to mean liberation. Essentially, weaponizing femininity is not the lib fem’s easy way out of adhering to patriarchal standards, but a revolutionary way of readdressing these standards, contorting them to our needs and using them as a valid form of self-expression.

However, weaponizing femininity needs to be used as an actual weapon. It is pointless to assume that any and all usage of makeup and "feminine" fashion styles and trends are feminist simply because they are done by a woman.

"Girls do not dress for boys. They dress for themselves and, of course, each other. If girls dressed for boys they’d just walk around naked at all times."

I haven’t shaved any part of my body for almost two years (except to get tattoos, and it was done by somebody else so it doesn’t count) and I have received a lot of compliments as well as crap on my "bravery" to go against the norm in such a physical way. For me, the choice wasn’t necessarily a feminist one (although feminism is literally my motive for everything) but out of sheer laziness. The hall of residence showers in my first year at university looked like 80s swimming pool showers, and with no bath ledge to lean my leg on and a complete lack of want to bend over to shave the offending/offensive hairs, I simply chose not to do it.

As time’s gone on, my body hair has become a defining characteristic of my physical self-expression. Thanks to my dad’s extraordinarily hairy genes as well as my suffering from PCOS (Polycystic Ovarian Syndrome), my body hair is long, dark and thick. It is noticeable from a mile away and I’ve been told on numerous occasions (in a numerous amount of [not] charming ways) that my leg hair "looks like tights" from far away. Even now, I cannot imagine myself as a woman without the hair on my body. The hair my body earned through puberty — through finding myself physically a woman, equally through my obsession with expelling this hair and embracing it; through mentally accepting and loving myself as a woman — is something I have earned. My body hair is not feminine; it is a marker of my womanhood. To me now, a shaved vagina looks like a raw chicken and my glorious bush, pushing at the seams of my knickers, is a part of myself I am incredibly proud of.

Once upon a time, my mother told me she could not fathom the want to shave your vagina. Now, she cracks jokes about my fuzzy pits. Another "once upon a time," my mother asked me if I was a feminist and embarrassingly, I denied it. I received a lecture on the suffragettes who died for my right to vote, my grandmother’s achievements as a woman and as a person — and my mother taught me to be proud of the "feminist" badge so many celebrities and friends are seeking to shirk.

The main question I get regarding my lack of shaving is not focused on that aspect of myself, but the rest in contrast. It is unfathomable to many that if I am lazy and feminist enough to shirk shaving norms, why then would I continue to wear low-cut dresses or short skirts or pink lipstick? Why am I catering to the male gaze in one aspect and not in the other? The best answer, as with anything to do with interrogations on your appearance choices (or any life choices, really) is: "Because I want to."

I was raised to love makeup, my idols always having been heightened versions of femininity. And even now, my goal for 2015 is to be Anna Nicole Smith reincarnate. The exact same reason comes to me when asked why don't I shave: Because I don't want to. My choices aren't feminist because I have chosen them as a feminist. To the average person on the street (who doesn't know how angry I can get over issues of sexism, racism, homophobia, xenophobia and prejudice), my tight dress will lead to an objectification. However, that objectification is not my fault, but the problem of the person who thinks it is acceptable to objectify me based on the way I dress. (Thus why I started a new trend last year: If you honk your horn at me, then I will spit on your car, because if you want to treat me like a "dirty girl," well, I'm going to friggin act like one.)

Essentially, our femininity is not something to be ashamed of. Wearing red lipstick to give you the confidence to tell a gross guy to f*ck off is not just valid, but brilliant. There is no feminist league table, and whilst I don’t place myself on a "better than everyone" pedestal for my choice to not shave, I equally refuse to be belittled for my impeccable eyebrows and adoration of skater skirts. The problem we’re encountering is with picking each other’s arguments and aesthetics apart before addressing the oppressive society that is making us choose between political beliefs and our portrayals of self.