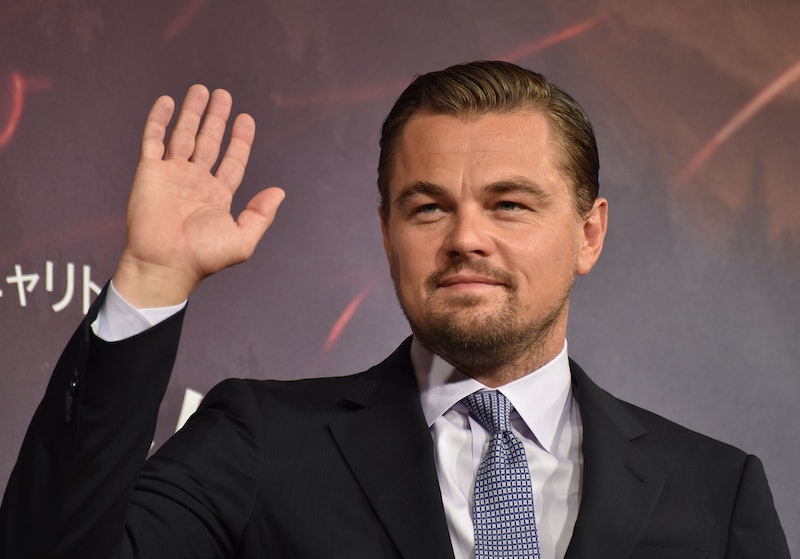 Hide-and-seek is an everyday game for this Oscar-winning actor. On Tuesday, Leonardo DiCaprio went to Beyoncé's Formation World Tour show in New York City. As you can imagine, the hugely famous actor didn't want to be spotted, so what did he do? DiCaprio did his best to hide again. If you aren't already aware, he tends to hide from the paparazzi in pretty unique ways. Unfortunately, his hiding skills didn't really work out this time around, because he was most definitely recognized.

While sitting in floor seats at Citi Field, DiCaprio wore a newsboy hat. Apparently, he thought that would make a great disguise. It did not. Or maybe it wasn't even a disguise, but The Revenant actor just really wanted to channel his inner Jack Kelly from Newsies . Or, he could very well be going all method for his next film about selling newspapers. Whatever the case, his hat failed him.

Many fans seated around the 41-year-old Great Gatsby star noticed him, took his photo, and then shared it on social media. As you can see below, he doesn't look thrilled. I mean, one fan even took a selfie with DiCaprio in the background. Yeah, that's a bit much.

At one point during the concert, he was even photographed wearing his jacket with the hood over his hat. Either he was really cold, was worried it would rain, or was hoping his coat would really transform into Harry Potter's invisibility cloak. Again, it didn't work.

DiCaprio has all kinds of hiding methods, so if you're ever in need of a hiding technique, definitely look to him, because acting isn't his only impressive talent. And hey, maybe they'll work out better for you than they do for the very recognizable actor. I mean, just look at him here. There's nothing he won't do.

Oh, Leo. Even though his hat didn't hide him from fans, Page Six reported that DiCaprio and his crew "were all dancing up a storm." I think it's safe to say that he still managed to have a great night.