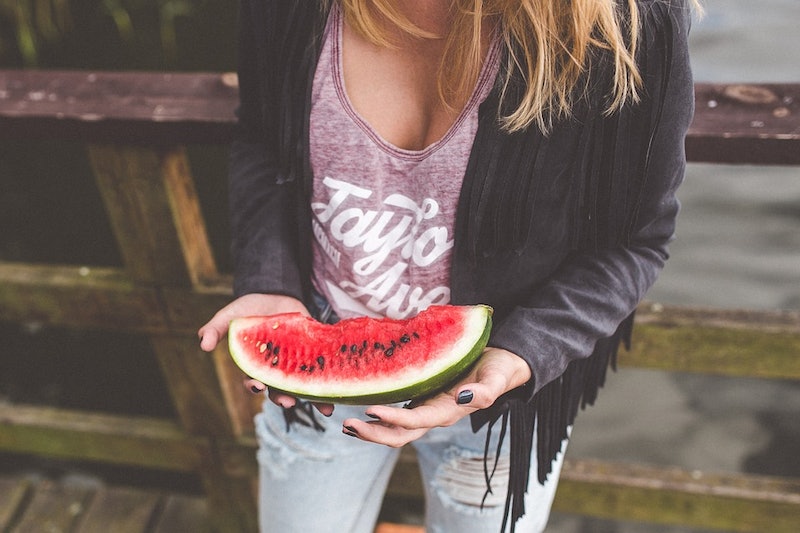 Nothing can feel quite as upsetting as knowing someone you care about is going through a difficult time. When it comes to disordered eating, it can be especially tough as an outsider to figure out what's triggering that person. But according to experts I spoke with for this piece, there are some signs someone is suffering from disordered eating that you can look out for if you think a loved one is in need of help. If you’ve opened this article, chances are you might already have seen a feeling that something is up, and are hoping to get some help in getting to the bottom of it, and ultimately helping him or her however you can.

I spoke to Melainie Rogers, MS, RDN, CDN, CEDRD, and Founder and Executive Director of BALANCE eating disorder treatment center ™ on the topic via email. Rogers says she agrees that disordered eating is serious, and that while it's different from an eating disorder, it still has an impact on a person's state of mind and can have physical and medical consequences. Here are some potential signs of disordered eating to look out for if you're concerned.

Let’s begin with the most obvious sign — weight loss. Have you noticed your loved one has lost a drastic amount of weight in a short amount of time? Weight loss in this way could be a red flag that something is going on, according to Rogers. What might begin as disordered eating habits in this way could be the beginning of a full-blown and major eating disorder, like anorexia, according to Psychology Today. According to WebMD, anorexia nervosa is characterized by weight loss. This weight loss is achieved through excessive dieting and sometimes even starvation.

2. Or Their Weight Is Constantly Fluctuating

Other types of disordered eating, however, can result is drastic fluctuations in weight, according to Live Science. It could be a sign your loved one is eating in such ways that have them consuming a ton or calories for a period of time, and then no calories for other periods of time. This, again, could slowly begin to lead to a full eating disorder if not handled soon enough. Live Science spoke to Dr. Thomas Weigel, instructor in psychiatry at Harvard Medical School and the Associate Medical Director of the Klarman Eating Disorders Center at McLean Hospital, on the topic. According to Weigel, those suffering from bulimia nervosa will have weight that is fluctuating. If your loved one has gained or lost a few pounds — don’t be overly concerned. However, if the weight loss and gain is severe, this could be another sign they’re possibly in trouble.

3. They Spend A Lot Of Time Moving Food Around Their Plate

Pay close attention next time you’re eating a meal with this person. Do they have strange eating habits, like moving their food around on their plate a lot? Marisa Sherry, MS, RD, a New York-based nutritionist who specializes in eating disorders, spoke to CBS News on the topic and noted strange behaviors at meal times can indicate something might be up. This could mean moving the food around more than actually eating it, or picking out only the very low calorie food items on the plate to eat. Rogers says when someone is battling disordered eating, their relationship with food is not neutral. That said, things like how they interact with food or speak about it can be more telling than the physical signs sometimes, Rogers adds.

The signs of disordered eating don’t always have to do with weight and eating habits, though. They can be about how the person acts from a social standpoint, too. According to Laura Discipio, executive director of the National Association of Anorexia Nervosa and Associated Disorders, who spoke to Live Science, avoiding social interaction is common amongst those who are battling these kinds of eating issues. This could mean avoiding hanging out with friends and family and spending most of their time alone.

Negative self talk is another sign your loved one might be facing an eating disorder. Health spoke to Cynthia Bulik, PhD, an eating disorders specialist at the University of North Carolina–Chapel Hill, who said negative thoughts about body size is a factor. This means the person might be prone to say things like, “I’m so fat” when they are not or “Look how awful my body looks when I’m wearing this.” This negative mindset could also lead a person to obsess over comments other people may have made offhandedly, such as, "You look different from the last time I saw you!" or other comments on appearance.

I spoke to Lauren Minchen, M.P.H., R.D., C.D.N. via email to get some further insight into the topic. Minchen agreed body dysmorphia — when you nitpick over flaw(s) in your appearance — is common among those who struggle with disordered eating behavior, and it's often expressed through negative self talk. Minchen adds, "Also, perfectionism is often a trait in individuals who struggle with eating disorders, and this trait can often manifest in a constant discontentment with the way his/her body naturally is."

6. They Seem To Be Always Talking About Food

Does your loved one seem to have an obsession with talking about food? That is to say, something that goes beyond, "I made the most insanely delicious dinner last night" type of comments. This type of obsession may entail intricately planning meals and calorie consumption days in advance, or always asking about calorie counts and nutritional information to the point of excess. According to The Guardian, some people suffering from issues with eating will talk in length about food as a means of “indulging though conversation.”

7. You Rarely See Them Eat In Public

Many times those with disordered eating will flat out refuse to eat in public, or will be very secretive about their food rituals, according to mental and emotional help site HelpGuide.org. Rogers agrees this could be a sign. Rogers says, "It would be strange given how often eating with friends and family is a part of our culture."

8. If They Do Eat In Public, They Use The Bathroom Soon After

How the person is handling themselves after meals can be a sign, too. If they're running to the bathroom after every meal they consume, for instance, it could mean they want to rid their body of the food ASAP. This type of disordered eating can be dangerous, as it can lead to a full eating disorder, as well.

"Anorexia can be easier to spot in public due to its very nature being food restriction," Minchen says. "Other types, like binge eating or bulimia patterns may be harder to spot because those who struggle with these disorders often have periods of time where they eat normally."

For those who do eat in public, though, if they’re suffering from bulimia nervosa it might mean they’ll make a quick trip to the bathroom following eating. According to ActiveBeat.com, given bulimics are known to purge after eating a meal, it’s likely they’ll try to find a place to do so following the meal, even if it’s in a public place. The outlet noted you might even be able to hear them purging, so be mindful and listen.

While exercise is part of a healthy lifestyle, over exercising can be quite the opposite. Have you noticed your loved one is always at the gym? This could be yet another sign that something is happening. Bulik told Health that excessive workout habits can sometimes be known as “exercise anorexia,” and are correlated with disordered eating. However, bear in mind that this is not always the case, and sometimes those seemingly addicted to the gym will have completely normal eating habits. "Bottom line: A whole body and mind assessment is really what's needed to definitively diagnose an eating disorder," Minchen says.

10. Their Hair Has Gotten Incredibly Thin

Other physical signs might be present in your loved, too. For example, CBS News noted thinning hair and brittle hair as physical signs someone's eating habits are in the danger zone. This occurs due to a lack of key nutrients

in the system, according to nutritionist Kimberly Snyder on her personal website. Rogers says other physical signs of disordered eating include pale skin and a fatigued appearance.

Was your loved one always someone who couldn't get enough of certain foods? Now, they go above and beyond to avoid those very same foods at all costs. Perhaps they even talk in excess about how they now avoid them. Minchen says one of the biggest signs someone is suffering from disordered eating is that they now "refuse to try or eat certain foods, despite liking those foods."

What should you do if the signs here seem to align to your loved one? Minchen suggests first being certain to communicate with love, care, and concern. "Do not accuse your loved one of anything," Minchen says. "Stick to only what you see. And always do it in private."

Minchen says to be aware that your loved one might not respond openly off the bat, but that's normal, as it can take some time for them to come to grips with their struggle.

If the above signs seem to stand out to you about a loved one, you might consider taking those necessary actions. Remember, there are ways for this person to seek the right help and get on the road to improvement with you by their side. The National Eating Disorder association has a confidential, toll free Helpline at 1-800-931-2237, as well as a system for crisis situations: text "NEDA" to 741741 to be connected with a trained volunteer at Crisis Text Line.