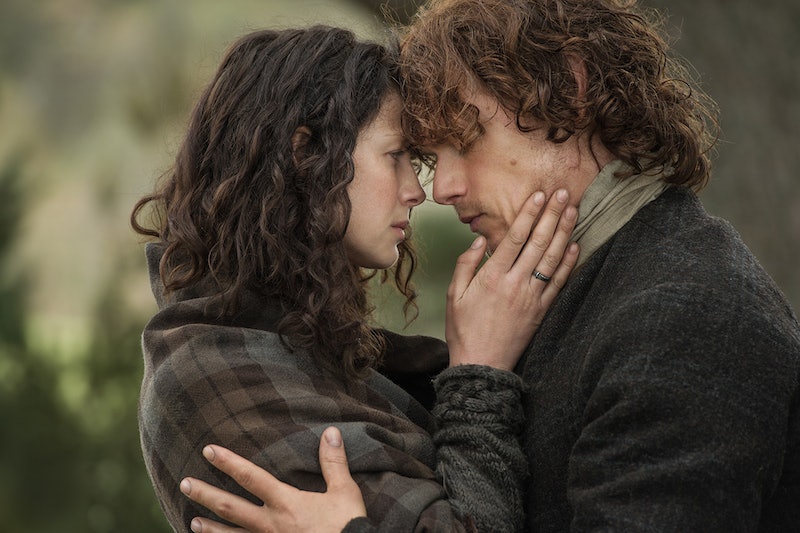 Unfortunately, Outlander fans have yet to see Jamie and Claire live their lives as parents. A few weeks back in Season 2, Claire’s pregnancy took a turn towards tragedy when she miscarried and her daughter was stillborn. No one can deny that she was the cutest and badass fake-pregnant woman TV has seen in a minute. Plus, watching Jamie adore his expecting lady was basically everything and more. And, ummm, that epic sex scene that took place when Claire was mighty pregnant? That happened. Not only did it happen, but actress Caitriona Balfe told Rolling Stone she and her hunky, single co-star Sam Heughan “loved the scene” as much as we did.

“Sam and I fought to keep the belly bump in… Why should that be a taboo?,” she told the magazine. “It's the one safe space for them in this time where they're kind of estranged from each other, and they've been struggling with their intimacy — and the fact that this is what brings them together, this unit of a family that they've become… I think it's a very sexy thing.” Sexy indeed. And even though I think the two stars have what it takes to have a red-hot romance off-screen, do they feel the same?

I caught up with the stars at LA’s Paley Center for Media recently and picked their brains about how they feel they would be as parents together in real life. Neither are parents in real life, and well, let’s just say they’re really, really good at acting.

“Oh, wow. [There would] probably [be] a lot of bickering, I would imagine,” says Heughan. “Certainly any children would have a very dodgy accent,” the 36-year-old jokes. He adds that Balfe would be the one to lay down the law. “I would like to think that I would be very relaxed, but actually would probably be kind of tough,” he says. “No, I think I’d be pretty relaxed. Yeah, she’d be tough. Very tough.”

Woah, woah. Is Balfe that hardcore? Actually, yep. She confirms she pretty much is. “I don’t know how much co-parenting would be going on. I think I’d probably be left holding the baby,” the 36-year-old actress says, laughing. “Oh, I’d be strict. He’d be MIA, are you kidding me? He’d be like, ‘Oh, I’m just going to go climb seven mountains this weekend, I’ll see you on Sunday night.’”

Hey, gotta give it to them for being honest. Maybe they’ll get another shot at being parents in seasons 3 or 4 (which are officially happening!) and their acting chops will really be put to the test. Until then, a girl can dream.