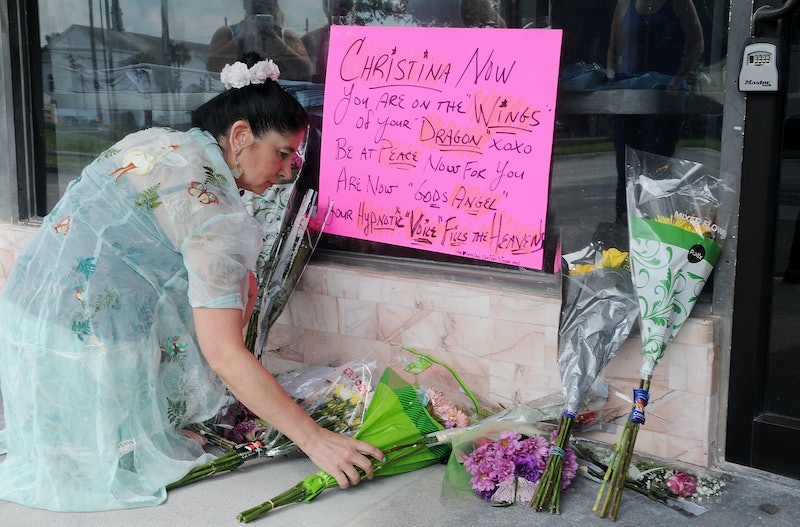 At approximately 2 a.m. Sunday morning, an gunman opened fire at Pulse nightclub in Orlando, Florida. Orlando Police Chief John Mina says that the gunman has been shot and killed, and originally said that "around 20" people are reported dead, with more than 40 people hospitalized, but Orlando’s mayor has updated the death toll to 50 deceased and more than 50 people have been hospitalized. The motive of the shooter has not yet been revealed, but due to the nature of the attack, it's likely many are wondering if the Pulse shooting is connected to the Paris shooting, in which 89 people were shot and killed at the Bataclan theater on a Friday night in November, 2015. NPR reports that Orange County Sheriff Jerry Demings says the Pulse Orlando shooting has been classified this as a "domestic terror incident." Update: ISIS' news agency has claimed responsibility, but the report is not yet confirmed, says Florida Senator Bill Nelson in a press conference.

Earlier: In Paris, a series of coordinated terror attacks killed a total of 130 people. The mass shooting and hostage situation at the Bataclan took place on a Friday night, when 1,500 were on hand to see the Eagles of Death Metal perform. About an hour before the show, three men with assault rifles entered the club and began shooting. Of the three attackers, two died after igniting the explosive vests they were wearing, and another was shot by police and died.

In Orlando, a man who Mina described as "organized and well-prepared" opened fire outside of the Pulse nightclub. CNN reports that a police officer who was working at the club exchanged gunfire with the shooter. The shooter then went inside the club, and a hostage situation ensued. USA Today reports that "police received updates from patrons trapped in the club, and decided to storm the club at about 5 a.m." CNN spoke to Anthony Torres, who says he was in the club when the shooting took place. "The shots did not sound like a regular handgun. It sounded like it was shooting repetitively and it wouldn't stop," he said. Fifty people are dead.

ISIS claimed responsibility for the terror attacks in Paris. France's president said that the attacks by ISIS were an act of war, and a three month state of emergency was put into effect in France, granting authorities "huge power," reported the Independent. In the weeks and months following the attack, European officials made a number of arrests in Belgium following raids of locations that were harboring alleged terrorists.

Senator Bill Nelson from Florida says that the Pulse shooting has some connection to ISIS. He spoke with ABC News Sunday morning:

The FBI is taking the lead. Both senator Dianne Feinstein, chairman of the Intelligence committee, as well as I have talked to the assistant director of the counter-terrorism center. There appears to be a link to Islamic radicalism ... there is some kind of connection to ISIS. The facts will emerge. Mike Finebach of the FBI asked me to make the plea to anybody that knows anything about the shooter ... to come forward with information.

NPR reports that the FBI says there are "suggestions that the individual might have leanings toward [Islamic radicalism]."

So far, ISIS has not claimed responsibility for the attacks in Orlando.

Donating blood is just one of the many ways to help those touched by the Pulse shooting.