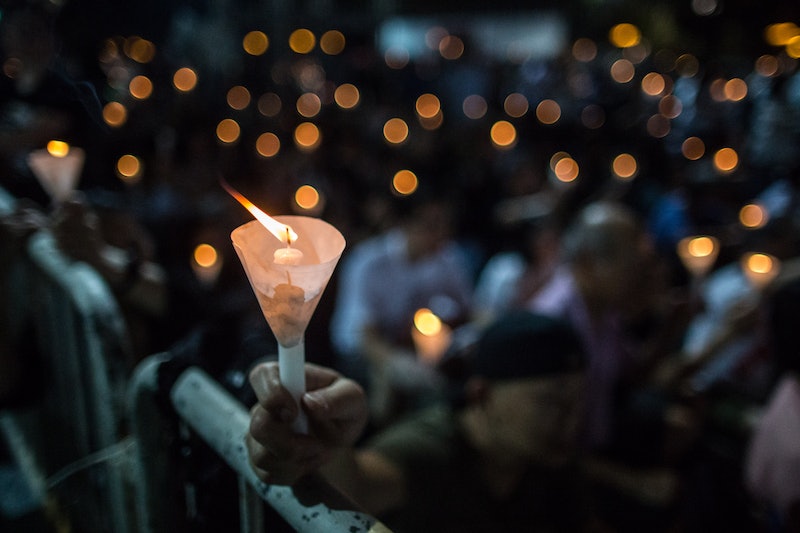 The entire nation was shaken to its core on Sunday, June 12, when a mass shooting killed 50 people at Pulse nightclub in Orlando, Florida. Although this tragic event took place in Orlando, people everywhere took to social media to express their condolences. Now, as the tragedy continues to spread across the country, people all over are planning services to honor those who lost their lives in the shooting. Here's how to attend an Orlando vigil near you and show solidarity with the victims' loved ones.

Update: The City of Orlando is asking people to refrain from holding vigils for the time being. In a tweet from the city's account, a statement read: "We understand our community is grieving and that vigils are being planned, but PLEASE hold off on vigils — they represent a serious strain on our limited resources, which we need to dedicate to law enforcement and victims. If you are seeking a location to leave memorial items, please use the green space in front of the Dr. Phillips Center for the Performing Arts in Downtown Orlando.

Earlier: There are currently 56 vigils listed on the WeAreOrlando.org website. The earliest candlelight vigil starts at 5 p.m. ET at the Pride Center in the town of Wilton Manors in Broward County, Florida. The rest of the services begin between 6 and 8 p.m. local time in each of the cities.

There are a number of ways to help the Orlando victims and their families, from donating blood to championing the LGBTQ community to spreading thoughtful messages on social media. Attending a vigil near you is another easy and helpful way to show your support for these victims, no matter where you live. A simple search on Twitter for "Orlando vigil" will help you find updated results on Orlando vigils as they pop up throughout the day.

Here's how you can attend a service near you:

In addition to the Stonewall Inn vigil, there are services planned in:

There will be two vigils in Colorado: one in Denver at Tracks nightclub and the other in Aspen hosted by AspenOUT at Paepcke Park at 8 p.m. MT.

Head to the vigil in Miami Beach (above) or attend one of these vigils in Florida:

Join others in Boston tonight at 6 p.m. ET or attend the vigil in Salem, Massachusetts, at 6:30 p.m. ET at the Riley Center.

There will be one vigil held in Seattle, Washington, tonight at 8 p.m. PT that is a collaborative effort between the City of Seattle, Mayor Ed Murray's Office, and local LGBT organizations. The event will take place at Cal Anderson Park from 8-11 p.m. PT.

There are 8 total vigils planned for the state of California to honor the Pulse nightclub victims. More information on the Harvey Milk Plaza vigil can be found on their Facebook page here. Another vigil will take place in Long Beach at 7:30 p.m. PT at the LGBTQ Center in Long Beach. For a complete list of vigils in California, check out the WeAreOrlando.org page.

Continue to check the WeAreOrlando.org page for a list of updated vigil services around the U.S. and add your own events to the list.