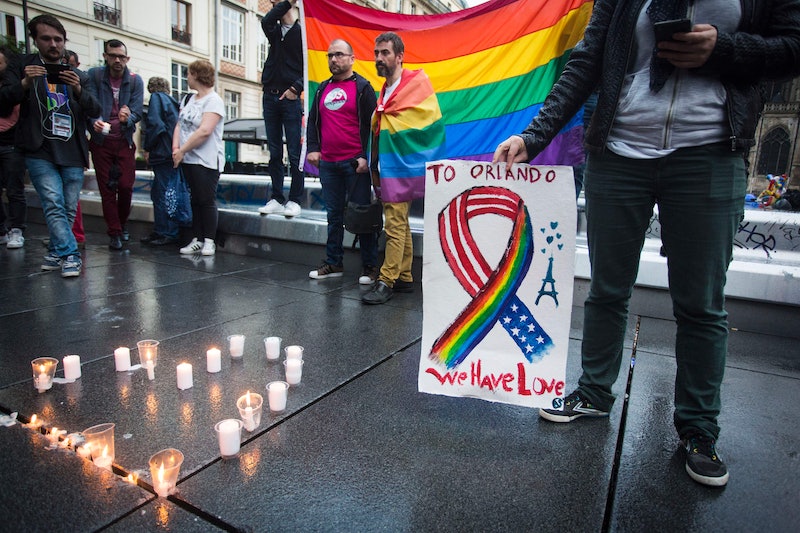 The Orlando community has responded with a massive wave of support to the need for blood donations following Sunday's mass shooting at the Pulse nightclub, but unfortunately, there is still one key demographic prohibited from donating: gay men. Despite previous reports that gay men were now allowed to donate blood, FDA guidelines still exclude gay men who have had sex with other men within the last 12 months from giving, even in this time of crisis. Susan Forbes, vice president of marketing and communications for OneBlood, the non-profit blood donation agency working in central Florida and handling much of the donation demand, said that the current FDA policy means men who have had sex with men can't donate.

"We are required to follow all policies set in place by the FDA," Forbes told Bustle, commenting on reports that OneBlood had lifted the ban on donations from men who have had sex with men in the past 12 years. That ban is still in place, but OneBlood can't accommodate gay men who haven't had sex in the past 12 months yet either. The FDA just lifted the lifetime ban a few months ago, and it takes time to implement that new policy because the organization has to update their systems, policies, and staff procedures. "We are working to implement those new policy changes, but the previous donor policy remains in effect at our centers because we need time to implement it," said Forbes. "We anticipate it to be there in the very near future."

The policy change might not come in time to impact the immediate need for blood, but donation levels have maxed out already and donation centers have turned away potential donors, according to OneBlood spokesperson Pat Michaels. "I've been here 13 years and never seen a response like this," Michaels told The Orlando Sentinel. "The sentiment is understood and appreciated, but it's a little too much, too soon," he said. Michaels asked for donors to come back in the near future, to keep the blood supply as high as possible. The need for blood in the wake of the shooting could extend for quite some time, which may give OneBlood the opportunity to implement the necessary policy and procedural changes.

Although OneBlood's inability to accommodate gay donors within the FDA guidelines may be discouraging, the great news is that so many eligible donors are coming forward that those donations aren't yet necessary. According to Forbes, the organization appreciates those gay men who want to donate, but it's important that OneBlood stays within the rulebook so it can keep doing its work. "We’re working as quickly as possible behind the scenes to implement the new policy, and we understand how people want to be able to help, and we thank them, but we have to make sure we have every thing right," said Forbes.