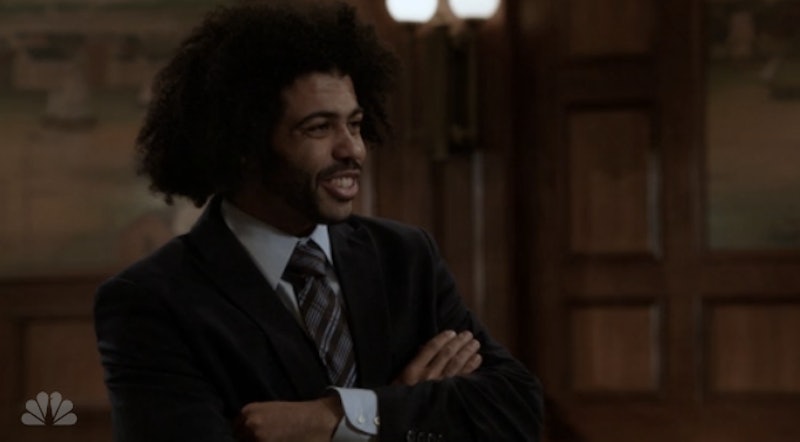 The 2016 Tony Awards poked fun at its nominees, with host James Corden highlighting how many of the performers who work on Broadway appear every year in small roles on Law & Order. And the biggest surprise was seeing that Leslie Odom, Jr. and Daveed Diggs were in Law & Order: Special Victims Unit together, in an episode called "Community Policing." But this wasn't just a fateful coincidental casting decision — this was an episode from October 2015, after Hamilton had already become an enormous success. Mariska Hargitay told Entertainment Tonight that filming with Odom, Jr. and Diggs together "it was like SVU: The Musical!"

Odom, Jr. plays a recurring role as Reverend Curtis Scott on the series, and has appeared in seven episodes across the past three seasons. Scott is a priest who contributes to SVU cases where the victim may have been targeted because they are a minority. While the Hamilton reunion is a lot of fun, the subject matter of the episode is quite serious — it's about a black man who is killed by police, which brings significant fire down on the department.

Diggs made a two-episode guest appearance as attorney Louis Henderson, who can be seen in "A Misunderstanding" defending two young men accused of attacking a woman. The Hamilton SVU episodes are on Hulu for subscribers if you missed it back in October. And here's the Law & Order bit from the Tony Awards:

Until you can finally nab some Hamilton tickets, watching Diggs and Odom, Jr. on Law & Order together is a pretty great alternative.

More like this
UK Viewers Will Have To Wait To Watch The Handmaid’s Tale S5
By Maxine Harrison
15 Offensive AF Jokes In 'Friends' That Really Aren't OK
By Tolly Wright, Bustle Editors and Meguire Hennes
The Ultimate Guide To 'DWTS' Season 31’s Move To Streaming On Disney+
By Brad Witter
Women Around The World Are Cutting Their Hair In Solidarity With Mahsa Amini
By Darshita Goyal
Get Even More From Bustle — Sign Up For The Newsletter