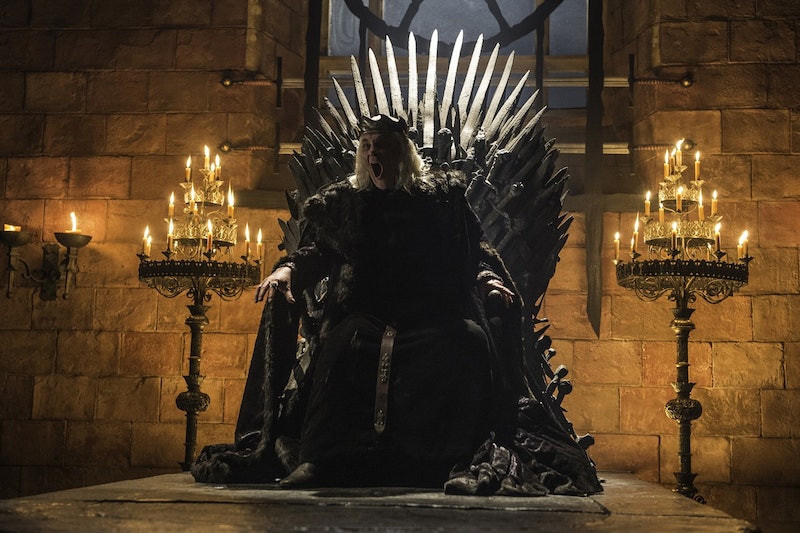 Since its first season back in 2011, I have always been a loyal fan of HBO's Game of Thrones, and despite loving the show, I never got around to reading George R. R. Martin's original series — that is, until now. After nearly six seasons, I finally cracked open a copy of the first installment of the series, and I immediately started having the thoughts all Game of Thrones show fans have when they finally ready the books. Needless to say, my mind was blown.

A phenomenon unlike any other, HBO's Game of Thrones has over 10 million weekly viewers, and it continues to break viewing records. The show is the HBO's most popular show ever, even surpassing the popularity of The Sopranos. Each week, viewers flock to their television sets and computer screens to see which one of their favorite characters is getting closer to the Iron Throne — and which ones are getting closer to death.

But before the wildly popular TV show was a thing, there was George R. R. Martin's original book series. First published in 1996, the A Song of Ice and Fire series currently spans seven novels, and will eventually fill seven books in total. Bestsellers and acclaimed novels even before the show premiered, Martin's series has sold over 60 million copies worldwide. Despite its popularity, though, there are still plenty of fans who have only every seen the show, and never read the books.

Complex, rich in detail, and filled with excitement, Martin's A Song of Ice and Fire series has everything Game of Thrones does... and so much more. If you watch and love the show, you'll inevitably give in and read the books. When you do, be prepared for these 10 thoughts to go through your mind.

After watching HBO's Game of Thrones, you'll eventually pick up George R. R. Martin's original series, and when you do, you'll find not everything is the same as it is on the show. Characters you know and love on screen are actually completely different in the books. Sometimes, just the name from the book to the show was changed. Other times, a character from the show turns out to be a combination of multiple characters from the written series, while others from the book were left out of the show entirely. With so many differences, you'll find yourself asking, "Who the heck is that?!" A lot.

One of the major benefits to reading the books over watching the show is that the written series goes so much deeper into the mindset, personalities, and motivations of each character. You get a clearer picture of who each family and each person truly is. Sometimes, that new information makes you love a character even more, but other times, you'll find the more you know about someone, the harder it is to cheer them on. It's truly a double-edged sword.

Aside from personality and name changes from the book to the show, of which there are many, there are also some major differences between the way characters are described to appear in the books and they way they appear in the show. It will having you scratching your head, stretching your imagination, and wondering, who looks better, the character in your imagination, or the one on screen?

Game of Thrones fans love two things: watching the show, and coming up with fan theories about it. From the plausible to the unbelievable, you've probably been hearing these fan theories since you first started watching the show, but when you finally read the books, so many more of them make sense. R+L=J? Yeah, you'll finally start to understand the meaning behind that.

When you get around to reading the series for the first time, you're bound to come to a scene that is so good, you can't believe it didn't make it into the show. Maybe it's a memorable conversation, some nail-biting action, or a favorite character quote, but no matter the book element, they'll all have you thinking the same thing: I really wish I got to see this in the show.

6. "I thought we already figured that out."

The show does a phenomenal job at building up mystery and suspense, but the books do it even better. While many of the secrets of the show may have already been revealed, you will find yourself reading the book and thinking, 'Wait a minute, I thought I knew this already." The book leaves more questions unanswered, more pieces of the story shrouded in mystery, and as you read it, you'll find it's a much more mysterious experience.

7. "I didn't realize there was this much magic."

While this latest season of Game of Thrones has included even more magical elements than previous seasons, including mystic elements, visions of the past and future, and resurrection, fans of the show who move on to reading the books will find even more magic alive and well in the book's version of the Seven Kingdoms. Sure, both the show and the books have dragons, wargs, and White Walkers, but magic and mysticism permeate every page of A Song and Fire and Ice, leaving new readers wishing more of it was featured on screen.

It's devastating to watch a beloved character tragically die on screen, but loyal viewers and first time book readers will be delighted to learn that some of those dearly departed souls aren't dead after all. Barristan Selmy, Shireen Baratheon, and even Pyp and Grenn are still breathing in the books, which new readers will be thrilled to find out. That brief feeling of glee, though, will quickly be replaced by anger and confusion, because if the character is still alive in the book, why did the show have to kill them off?

Most readers know that books are always, always better than their adaptations, and reading A Song of Ice and Fire after watching Game of Thrones will only reaffirm that belief. The show is great, no doubt, but nothing is as good as its original source material, which you'll inevitably come to think after reading the books.

Once you finish watching the show and you finally catch up to the last published book in the series, you will join the millions of readers who are all consumed with the same thought: when will George R. R. Martin release The Winds of WInter? Get ready for anxious excitement like you've never known.