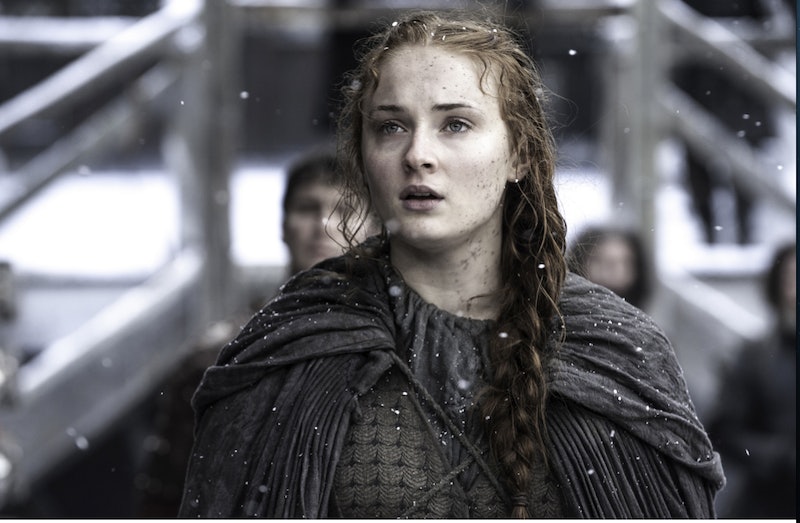 With all the fascinating and dramatic characters in Game of Thrones, it's no wonder there are a zillion and one fan theories flying around. We've all been shocked and burned too many times by surprise deaths, and at this point, fans want to make sure if some terrible misfortune does befall a character, we were all prepared for it beforehand. But time is running out on Season 6 of Game of Thrones — and the following episodes seem like they will be jam-packed. That will inevitably lead to some of these popular fan theories getting disproven, or getting saved for the next season. However, there are some fan theories that need to be proven true in Game of Thrones Season 6, or it's going to the longest year ever until the show returns.

It feels like its time for things to finally start looking up for our favorite characters. They've gone through the Seven Hells to make it where they are now. It's time for the Starks to take down their enemies, for Daenerys to really get down with her dragons and her power, and for us to figure out both what's going on with Bran's powers and what's going to happen now in the future with all these white walkers.

Each Sunday after I finish an episode of Game of Thrones, I immediately scream to the heavens, "Why! I thought they were going to actually do it this time! Why!" But alas, the fan theory favorite that keeps getting tossed to the side each episode is that Rhaegar Targaryen and Lyanna Stark created a bouncing baby Jon Snow in the Tower of Joy. It's significant because it would make Jon a Targaryen and technically the Stark siblings' cousin — but alas, the show has yet to even acknowledge it. Soon, I'm sure. Soon.

I swear, this whole list won't be mathematical equations. But this next one is: The next baby making-duo fan theory we have is that the Mad King Aerys Targaryen and Joanna Lannister got down to create Tyrion — meaning Tywin Lannister wouldn't be Tyrion's dad, as previously thought. If we can find out at least one of these illicit Targaryen affairs is true, I'll be happy.

3. Sansa Is Going To Kill Littlefinger

In Season 6 Episode 6 "Blood of My Blood," Sansa sneaks off to find Littlefinger and coldly tells him,"Did you know about Ramsay? If you didn't know, you're an idiot. If you did know, you're my enemy." She refuses his forgiveness and offer of her cousin Robin's troops from the Vale. It was the most empowered and badass Sansa we have seen, which is good because she seriously needs to stick up for herself after what she's been through. I kind of hope she kills him next, which is actually a pretty popular fan theory.

A dude with cold hands who just so happens to be Benjen Stark and helps save Bran's day shows up? I'd say the old-school fan theory that the long-lost Benjen Stark is the not-yet-mentioned character from the Song of Ice and Fire series, Coldhands is coming to light. And yet, he both hasn't come out and admitted it in the show and George R.R. Martin refuses to admit Benjen is Coldhands. But... we're so close!

Jon Snow straight got brought back to life just like the chosen one (Azor Ahai) for The Lord of Light is meant to do, according to Melisandre. Azor Ahai,defeated The Others (aka White Walkers) long ago, and he's supposed to return to do the job. Could we find out this season that Snow is this Mr. Ahai, as this popular theory suggests? That would be really cool on so many levels.

6. The Hound Is Alive

I think we can all agree that we could stand to see The Hound redeem himself with a little trial by combat against his brother, The Mountain. And Cersei's trial would be just the place for it, as this theory suggests.

OK, I lied. One more equation. We could also find out this season that Meera Reed is Jon Snow's twin, per this theory, also from the Rhaeger-plus-Lyanna combo. I'm not entirely sure what this will do for the duo, but a family reunion might be nice.

Just having a fur rug on the floor that looks like Shaggydog doesn't mean it Shaggydog. Maybe the Umbers aren't jerks and did stay loyal to the Starks, as this theory suggests? It would be great if this could be proven right away. Do you hear me, universe? We need some live direwolves!

9. Bran's The One Who Made King Aerys Go Crazy

This one would be cool and time-travelery if it were true, but also kind of devastating for poor Bran. The idea from redditor NegativeKarmaSniifer is that Bran attempts to reason with King Aerys while he's in the past, but the King just goes totally crazy instead, setting forth the whole chain of events.

Think about it. Syrio and Jaquen are both from Braavos. Syrio and Jaquen both have some feels for Arya. Maybe when Syrio Forel said "not today" to death, he really meant it. Maybe this man is not as faceless as he pretends to be, as this theory suggests, and his paternal feelings for the little Stark girl will change up the game with the Waif comes for her.

In a series full of seriousness, we can always use some jokes. So a Redditor, The_Others_Take_Ya hooked us up with the idea that the dragonglass comes from the dookie of dragons. In a series that handles fantasy with some real-world stuff, it makes sense that dragons would poop and it would be hilarious if that was the contents of it.

There's only a little bit left of this season and quite a few more theories that will hopefully be proven. Stay tuned!

More like this
'GoT' Star Emilia Clarke Says She "Just Can't" Watch 'House Of The Dragon'
By Brad Witter
15 Photos Of 'The Last Of Us' Star Pedro Pascal That Cement His Zaddy Status
By Radhika Menon
Netflix Shut Down 'Bridgerton' S3 Rumours About A “Very Dark” Storyline
By Bustle
'Wednesday' Star Emma Myers Thinks A Wenclair Storyline Is “Possible” In Season 2
By Alyssa Lapid
Get Even More From Bustle — Sign Up For The Newsletter
From hair trends to relationship advice, our daily newsletter has everything you need to sound like a person who’s on TikTok, even if you aren’t.