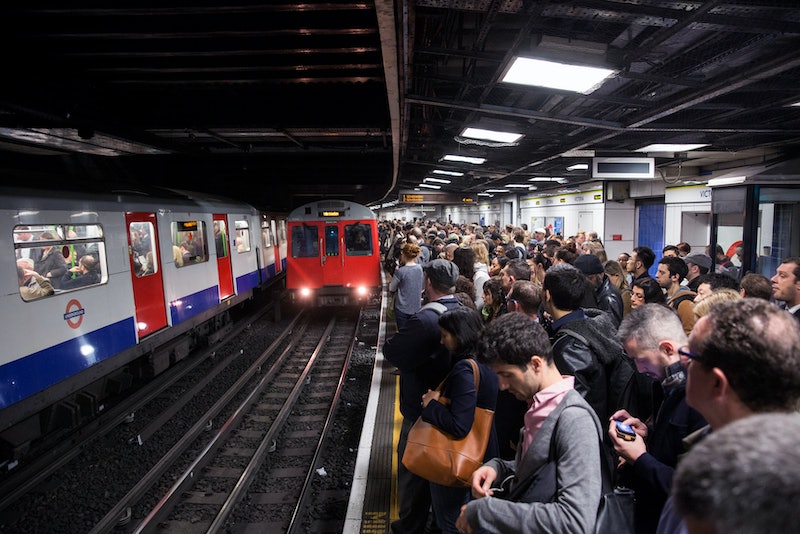 London's Mayor Sadiq Khan just announced that Transport for London (TfL) is banning advertisements from the Tube and bus that promote negative body image through rhetoric about "bikini bodies" and other fat-phobic messages. These kinds of ads harm commuters every day, and London's ban on body-shaming ads on public transit marks a huge step forward for body image positivity. Hopefully, we'll be seeing more moves like this around the world to stop the deluge of triggering, shaming images and words all around us.

“As the father of two teenage girls, I am extremely concerned about this kind of advertising which can demean people, particularly women, and make them ashamed of their bodies. It is high time it came to an end," Khan said in a press release. “Nobody should feel pressurised, while they travel on the Tube or bus, into unrealistic expectations surrounding their bodies and I want to send a clear message to the advertising industry about this.”

TfL and its advertising partners will now send all ads submitted to be shown on public transit to the Committee of Advertising Practice, which will vet them to ensure that they meet these new standards.

The decision comes in response to passenger complaints about an ad for Protein World's Weight Loss Collection, which reads, "Are you beach body ready?" This phrase is commonly used in weight-loss ads, and it needs to go. The concept of a "beach body" implies that certain bodies should not be seen on the beach, and connecting the notion of a "beach body" with weight loss suggests that you aren't worthy of wearing a bikini unless you lose weight. It's especially harmful for children to see these messages while their ideas about body image and health are still forming.

In the government's press release, TfL Commercial Development Director TraGraeme Craig reminded us of an important point about advertisements in public spaces like trains and bus stations: We don't get to decide whether or not we see them. "Our customers cannot simply switch off or turn a page if an advertisement offends or upsets them and we have a duty to ensure the copy we carry reflects that unique environment," he said. But nobody should be forced to see images and words that could be triggering for those with body image issues, not to mention objectifying to women.

Given that the Mayor believes the TfL can continue to generate just as much income through ads, this move seems like a no-brainer. Obviously, it won't change the fact that we're still bombarded with unrealistic beauty standards in other places, but at least it sends the message that body-shaming is not OK.