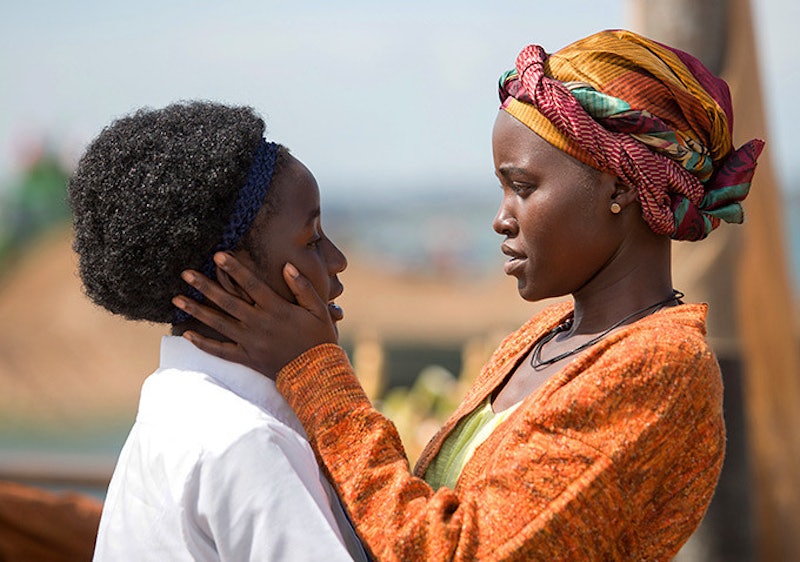 Summer is a season for popcorn movies — think explosions, bikinis, big fights, and 3D glasses. And, like the stupid-good, buttery popcorn from your local cineplex, these films tend to be fun, but don't offer a lot of substance, especially if you're looking for feminist themes, engaging dialogue, or sexy LGBTQ plot lines. Not exactly welcoming terrain for women, right? Well, comrades, the year isn't over yet. It turns out that there are lots of 2016 films all women should look forward to that offer much more than just your typical blockbuster fare.

Writing about films for "all women" might sound like a pretty broad brush, but I want to acknowledge that the movies on this list are a kickass place to begin with, should you want to explore the multiple roles women are playing in the film industry. Just like women's identities, the possibilities for film are limitless, and it's worth checking out flicks that question, affirm, and disrupt your perspective on the word. And although that might sound hella complicated and full of contradictions, I'm of the belief that feminist movies need to create that brand of tension. So, what kind of movies should women look forward to in 2016? The ones that address their rich experiences, while helping them engage other possibilities and histories.

2. The Birth Of A Nation

Nat Parker directs and stars in this Sundance-acclaimed period piece based on the 1831 slave rebellion led by Nat Turner. Does the title sound familiar? It's because Parker reclaimed it from a 1915 KKK propaganda film by D.W. Griffiths. "Anyone who sees this film should leave the theater and feel compelled to be a change factor with respect to relations that are taking place in this country," Parker told The Hollywood Reporter. "But also, they should be proud to be an American. This country was built on rebellion." (October 7)

While this film will probably be a huge hit, it has stirred up a ton of controversy among feminists. Leslie Jones, the only black woman on the new Ghostbusters team, recently responded to criticisms that her role is one big stereotype, defending her character. Regardless of what you think of that aspect, though, there's no denying that an all-female Ghostbusters is pretty damn cool. (July 15)

A financial thriller that addresses sexism? I sure hope this one makes bank. (July 29)

If the above scene doesn't have you making a not-gonna-cry face, then the incredible true love story behind the movie will. In real life, an interracial couple, the Lovings, fought against the state of Virginia for the right to live together. Their case made it to the Supreme Court in 1967, where the Lovings won against the state's anti-miscegenation laws. (November 4)

Ryan Gosling and Emma Stone star in this musical about making it in modern-day LA. What's not to love? (December 2)

7. Rogue One: A Star Wars Story

The world was like, "More ladies at the front of Star Wars, please!" And, Star Wars was like, "Sure, folks. Here you go." (December 16)

Three couples team up against and tell them they should divorce. Sounds fair, right? (August 26)

About a gay man dealing with his mother's cancer, Other People was a Sundance favorite and will bring out all the tears. (September 9)

11. How To Talk To Girls At Parties

A short story by Neil Gaiman, author of Coraline, comes to screen with director John Cameron Mitchell (Hedwig and the Angry Inch) at the helm. This might be the only movie I watch this year. (TBD)

12. Fantastic Beasts And Where To Find Them

Does this one even require a description? (November 18)

If you've kept Ana Lily Amnipour's A Girl Walks Home Alone At Night high on your list of favorite movies, get ready for her next film, which brings together Jim Carrey and Keanu in a Texas wasteland full of cannibals. (TBD)

This sweet family drama from Hirokazu Koreeda tells the story of three sisters in their twenties who take in their teenage half-sister when their father dies. Bring on the tears. (July 8)

If you haven't watched this gem of a TV show, you need to get your priorities straight. (July 22)

I am beyond psyched for this coming-of-age romance about softball, L.A., and unrequited queer crushes starring Kimmy Schmidt's Dylan Gelula and a bunch of other dreamy cast members. (TBD)

Ladies, get excited for this intriguing batch of movies.

More like this
These 25 International Horror Movies On Netflix Prove Fear Is A Universal Language
By Bustle Editors
What’s New On Netflix: Ana De Armas’ 'Blonde' & A Nick Kroll Special
By Arya Roshanian
What’s New On Netflix: Meet 'The Real Bling Ring'
By Arya Roshanian
Lashana Lynch’s 'Woman King' Training Was “Traumatizing” For A Relatable Reason
By Radhika Menon
Get Even More From Bustle — Sign Up For The Newsletter