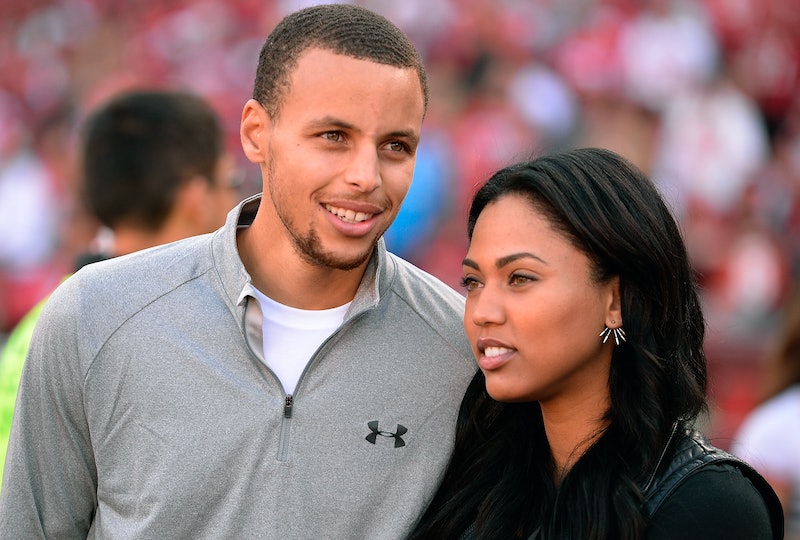 While watching romantic-comedies and dramas is one of my greatest thrills, nothing compares to when I learn about two people who love each other like they do "in the movies" but in real life, and lately, basketball star Steph Curry and his wife Ayesha Curry, have given me major couples envy. During his run with the Golden State Warriors, fans have become transfixed on his wife and their adorable children, Riley and Ryan, simply because they just look so happy. After seeing some of their interactions in public and on social media, I was curious of their love story, and decided to look into how Steph and Ayesha first met.

The couple have not been ones to hide many aspects of their story, and in 2012, they shared with their hometown paper, The Charlotte Observer, sweet details of their first meeting. Steph, son of basketball player Del Curry, met Ayesha (then Ayesha Alexander) when they were at youth group at Central Church of God in Charlotte, North Carolina. Steph shared that their families loved them together from the beginning. "It’s funny, our parents used to make jokes about how cute we were together, but we didn’t know," he said.

Ayesha told The Charlotte Observer a story about how she connected with Steph after they discovered they'd both lived in Toronto for some time, so she brought him some Canadian candy. "I got him some fuzzy peaches, but I was so shy I didn’t say anything. I just handed them to him and walked off," she said.

They eventually got married in 2011, and now are one of the NBA's most beloved couples. Here are some of their sweetest moments that will make anyone understand why they're #couplegoals.

When She Cheered Him Up After A Tough Loss

Steph's surprised smile says it all.

When He Wrote This Sweet Birthday Message

He is nnot afraid to show his love.

When They Sang A Disney Song Together

The Currys are not immune to the charm of Frozen.

When They Poked Fun At Each Other

I am dying at Ayesha imitating Steph by repeating, "Dribble, dribble, shoot," and Steph talking about BBQ.

When She Posted An Inside Joke

With this caption, I think at this point they are flaunting their cuteness in front of all our faces!

When They Had The Same Sense of Humor

The "swimfan" caption is probably talking about the film about a girl who gets obsessed with a swimmer, but we know that this love is not one-sided.

Hmmm, where can I find my own Steph Curry?