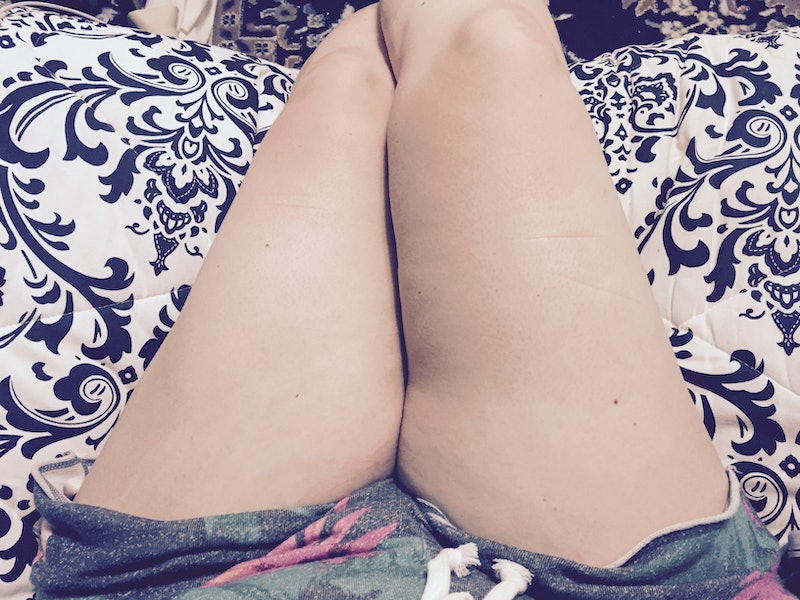 The hotter it gets, the happier many of us feel — until we're presented with the issue of how to deal with thigh chafing, that is. As more and more layers are shed and sweltering temps make full-body sweating an inevitability, it's not uncommon for glorious stems of all sizes to rub up against one another. In the words of artist and illustrator Sara M. Lyons, "My thighs touch because they love each other." But they also touch because, unless you have a very defined thigh gap, that's just what legs seem to do. Call it anatomy.

Nonetheless, many of us still fear the chub rub (a term of endearment for "thigh chafing" I've heard uttered by lots of fat positive people I know, but that is not meant to imply that only fat people chafe). Some of us chastise our bodies for what many medical sites like MDHealth and Express Chemist cite as a "very common," naturally-occurring experience amongst women and feminine people. Some of us invest our hard-earned dollars on yet another potion that promises to prevent chafing forever. Some of us look down at the raw-feeling or blistered or aching skin between our legs and curse whatever gods we can think of.

But one of the concerns I've been hearing a lot as of late when it comes to chafing is targeted at the darker skin (sometimes purple; sometimes brown) that can result from continuous rubbing. While there's no technical term for this "chafed skin," as per my dermatologist at Affiliated Dermatologists in New Jersey, it still leads many of us to ask why this it happening. What does it mean? Does it make me look ugly? Am I horrifically fat? And that's why the one thing we need to remember when it comes to dealing with thigh chafing this summer is that those darkening patches of skin are perfectly normal.

My Thighs Touch Because They Love Each Other — Unisex Long-Sleeve, $48, Feminist Apparel

As with anything related to the weirdness that is our physical form, particularly as Homo sapiens living in a body shaming world, it can be incredibly easy to convince oneself that there is something wrong with the things our bodies are doing. Hell, I did this when it came to these dark patches of skin creeping between my genitalia and knees for years. It wasn't until coming across an episode of Bad Fat Broads — a podcast for radical conversations about fatness and marginalization — and hearing host Ariel discuss said patches that I realized just how common they are. This is precisely why it's so important to "deal" with the emotional consequences of thigh chafing just as much as the physical ones.

When it comes to preventing chafing, there are of course things one can do. I'm not suggesting everyone endure unnecessary pain or anything. Jockey skimmies are amongst the best slipshorts out there. They won't make you feel like you're packed tightly beneath corset-esque shapewear, but they will prevent chub rub. Bandelettes eradicate the need for a full extra layer altogether. Vaseline is also pretty great, albeit mostly for smaller legs.

But despite how much you prevent peeling, bruised, or raw skin, chances are that you won't completely stop those dark patches from taking up residence on your inner thighs. Even if my legs haven't visibly chafed, the patches always remain. It's likely down to many years of chub rub, a perpetual lack of the aforementioned thigh gap, and the simple reality that even when I'm wearing my beloved skimmies, my legs are still rubbing together. They might not be ripping each other apart; but they are still rubbing together, altering the nature of the skin by default.

The thing is, it's pretty undeniable that much of the hatred surrounding natural occurrences like chafing and cellulite is rooted in socially established fat-phobia. Approximately 90 percent of women have or will have cellulite at some point in their lives, yet firming creams and laser treatments and wild ice-therapies meant to reduce our cellulite "symptoms" are still highly prevalent.

Admittedly, the key difference between chafing and having cellulite is that the latter doesn't cause physical pain. But the key similarity is that both are, very often, associated with being fat or being in the process of getting fat. In other words, they're associated with the number-one fear of little girls and adult women and probably most contemporary humans of the world.

Most fat people will likely attest to the discomfort, pain, isolation, and marginalization that arise when social dogma dictates that the body you live in is inherently repulsive or undesirable. Most can attest to sinking feeling that is those around you growing petrified over "getting fat" (ergo, of looking like you) or "feeling fat" (ergo, thinking they already look like you because they've eaten a whole package row of Oreos). Fat is not a feeling, however. It cannot be caught. It cannot contaminate anyone. Coopting the identity of fat people when one feels sad or insecure or "ugly" needs to stop — and that undoubtedly applies to the ways so many of us talk about things like chafing.

So no: The dark patches of skin between your legs don't automatically mean you are fat. But even if you are fat, that's OK, too.

It's equally undeniable that a lot of these concerns are rooted in beauty standards at large: In the kind of rhetoric that perpetuates "flawless skin" and "toned legs" and an overall "blemish-free" body. Few, if any, of us have bodies like that, though. Few of us never experience breakouts or volume-less hair. Few of us have perfectly chiseled jawlines or legs with no signs of having lived and grown on them. Part of being a human is showing signs of change: Of aging, of maturing, of growing (both internally and externally), of staying up too late too many times. That's how it's supposed to be. That darker skin nestled between your legs that just doesn't match the rest of your limbs? That's just another part of the narrative.

Our bodies will always do weird things, but a little bit of darker skin than you're accustomed to seeing on your legs isn't the end of the world. Nor is it the weirdest thing that your body will do. Think of menstruation. Think of farting. Think of inexplicable vaginal discharge. Bodies can do gross things, sure. But nothing aesthetic about your body can ever be gross.

This summer (and for all eternity), let us please try to remember that the dark skin caused by chafing won't make you look less attractive or sexy. It won't stop anyone worthy of being in between your legs from hanging out there. It won't really make you less of anything. On the contrary, it's a lovely little quirk. It's a detail that makes your body unique to you alone — and such details could never be "bad" things.