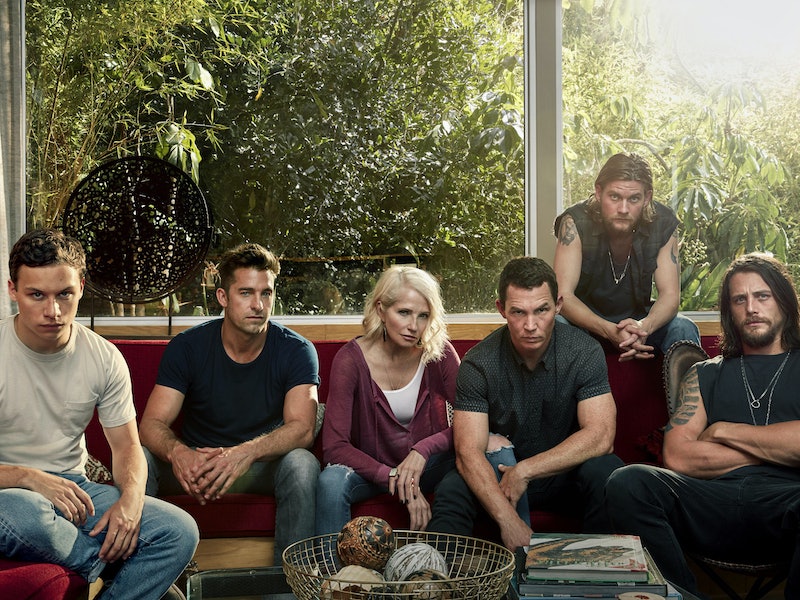 In a time when original ideas seem scarcer and scarcer on television — with so many of our shows based on books (Game Of Thrones), comics (Supergirl), graphic novels (The Walking Dead), movies (The Exorcist), true stories (The People v. O.J. Simpson), and even other TV shows (Hawaii Five-0) — it's usually a safe assumption to make that any new series about to premiere is based on something or other. So is that the case with TNT's newest scripted drama? Is Animal Kingdom based on a true story?

Well, yes and no. The new show (which joins TNT's slate of original programming like The Last Ship and Major Crimes on Tuesday) is indeed based on something: A 2010 Australian film of the same name. That film in turn was inspired by real-life events — so it would not be inaccurate to say that the TV show is also inspired by real-life events… although claiming that it's directly based on a true story is perhaps a bit of a stretch.

2010's Animal Kingdom was one of the most acclaimed movies to come from Down Under in recent memory, starring a veritable who's-who of great Aussie actors including Jacki Weaver (Silver Linings Playbook), Joel Edgerton (The Gift), Guy Pearce (Memento), Ben Mendelsohn (Bloodline), and Sullivan Stapleton (Blindspot). It was nominated for 11 Australian Film Institute Awards (basically the Australian Oscars) and won eight of them, including Picture, Director, Screenplay, and three Acting awards. The film even had moderate success Stateside, earning Weaver an Oscar nod for Supporting Actress.

Writer/director David Michôd made no secret about the fact that he was inspired to make his film because of very real Australian gang activity. According to a 2015 interview with The Guardian, Michôd "developed an interest in true crime, finding crime books 'a strangely useful cultural and geographical guide to the city.'"

He started working on the Animal Kingdom screenplay after moving to Melbourne when he was only 18 years old, and based it on both his knowledge of Australian crime generally and the Pettingill family specifically — especially an event known as the 1988 Walsh Street police shootings. According to the Australian paper The Age, in October of that year, two officers were ambushed and killed in Melbourne, allegedly as retaliation for a gang member who had been shot dead by police a day earlier. According to Yahoo, four men were arrested, Victor George Peirce, Peter David McEvoy, Trevor Pettingill, and Anthony Farrell, but they were acquitted in 1991.

Although TNT has transplanted the action from Oz to SoCal for their series, the inspiration remains intact. "David Michôd and [original Animal Kingdom producer] Liz Watts are involved in this TV show," showrunner Jonathan Lisco told the audience at his show's Television Critics Association panel this January. "I think David would say the inspiration for the movie came from the Pettingill family, an Australian crime family ... I think the material is an example of truth being a little stranger than fiction."

Sounds like a perfect role for Ellen Barkin (Switch, The New Normal), who replaces Weaver in the role of the crime family's fearsome matriarch, Janine "Smurf" Cody. But she won't merely be imitating that Oscar-nominated performance, either: "We wanted to be very careful that we not try and replicate performances from the film," Lisco said during the TCA panel. "I don’t really think I'm stepping into anyone's shoes," Barkin agreed. "I don't think the movie was a beginning, a middle or an end point for us. It was more like source material as much as a book I might read."

Barkin will co-star alongside the likes of Scott Speedman (Felicity) and Shawn Hatosy (Southland) in this Americanized re-telling of the Pettingill family saga, premiering on TNT this Tuesday at 9:00 p.m. ET.

More like this
'The Undeclared War' Spotlights The Real-Life Threat Of Cyber Attacks
By Maxine Harrison
This Michigan Couple Really Won $27 Million After Finding A Lottery Loophole
By Brad Witter
What’s New On Netflix: 'Stranger Things' & 'Mean Girls'
By Arya Roshanian
Hannah Khalique-Brown Has Her Sights Set On 'Strictly'
By Frances Stewart
Get Even More From Bustle — Sign Up For The Newsletter