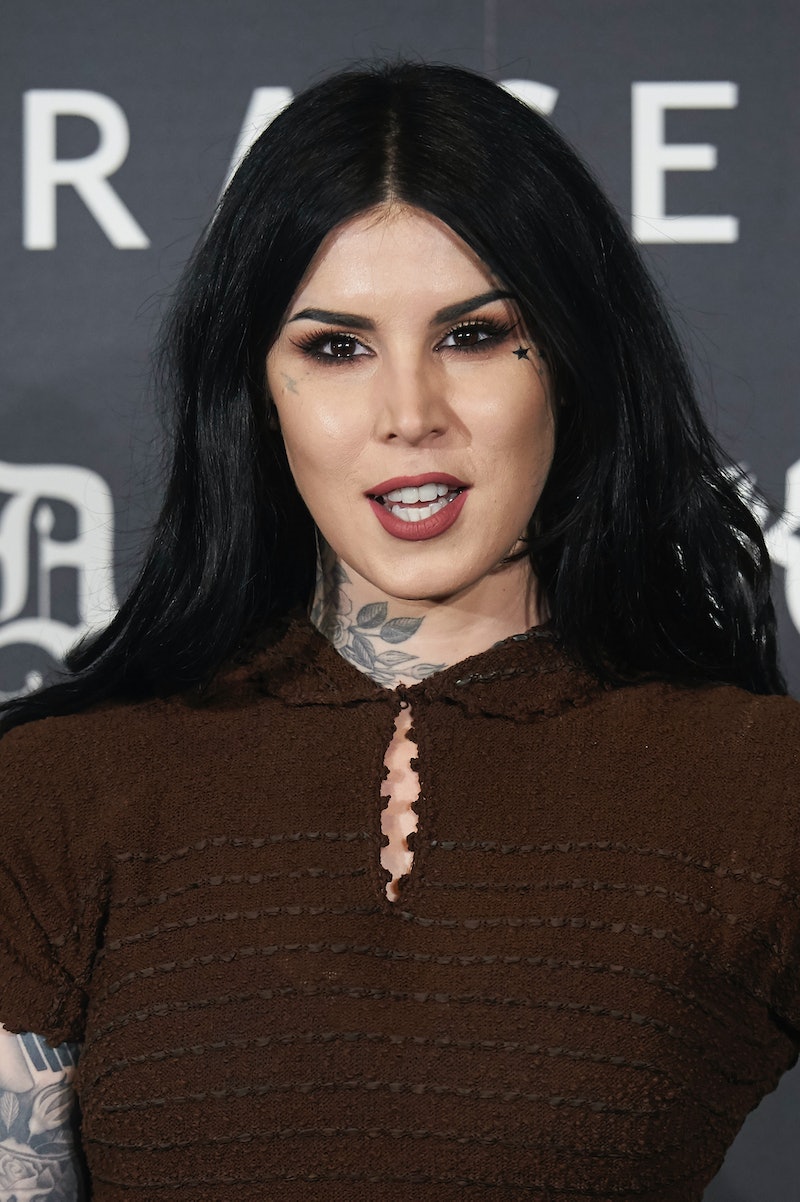 In case you missed the surprise Instagram announcement, Kat Von D Beauty has a new Serpentina eyeshadow palette coming soon. She hasn't even shown fans the inside yet, but that hasn't stopped the makeup maven from hinting at a release date and answering a few fan question on Twitter. One of those fun facts had to do with the ingredients. It looks like animal-lovers can breathe a sign of relief, because the Serpentina palette is vegan. Something tells me this mystery palette will fit in nicely with the other best-selling products from the brand.

If there's one thing that's better than the spectacular quality of Kat Von D's beauty products, it's that almost the entire line is vegan. According to Twitter, the Serpentina Palette, which launches in less than 30 days, joins the large majority of totally vegan products Kat Von D sells. The company has a whole section of their site devoted to telling you which collections and eyeshadows are vegan, and the list is filled with 25+ items to choose from.

That's not all either. According to the Kat Von D site, the company doesn't test any of their products on animals either. So you can feel good about every single product you buy from them, even if it's not completely vegan.

What exactly does it mean for a palette to be vegan? The site lays it out in black and white, so you have nothing to be confused about. "Although the FDA hasn’t established a regulation for what it means to be 'vegan,' we define it as as a product that does not contain any animal products or by-products, and has not been tested on animals," it says on the site. Simple as that!

The inside of the palette is a secret as of now, but, Trendmood has speculated that tarnished golds and coppers will be included. If you're looking to get your hands on some vegan shades ASAP, there are plenty of other Kat Von D Beauty choices for you. Here are some to shop while you wait for the palette to launch.

This gorgeous copper color is too good for you to pass up.

This shade is stunning and not for the faint of heart.

Animal-friendly and gorgeous in color? This one's almost too good to be true.

This pop of gold would fit perfectly into the Serpentina palette, so maybe we'll be seeing it again.

Last but definitely not least is this gorgeous shadow collection. You can get all four gorgeous shades in one palette.

I can't wait to see what this vegan palette looks like!