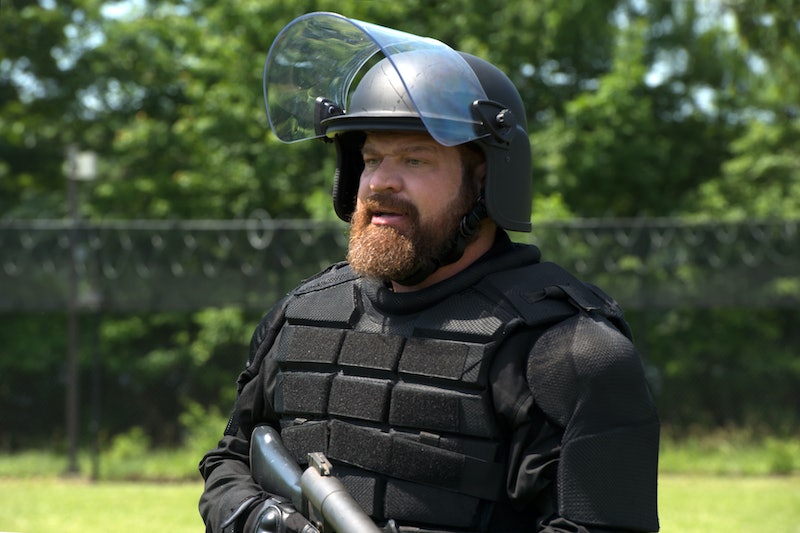 At the end of Season 3 of Orange Is The New Black, most of the old corrections officers had bailed, citing benefits cuts as their reason out, and viewers like me knew, just knew, that something bad was a-brewing. All of these guards, while tough enough, had a human quality when it came to the inmates. But, now, Litchfield is a for-profit prison, and the guards, like new CO Piscatella, mean business. Who is Piscatella on Orange Is The New Black , and what kind of pain will he impose on the inmates?

If you’re thinking that Piscatella looks familiar, well, you’ve definitely seen him before. Brad William Henke, the actor who plays him, has been in television shows like Justified, The Bridge, Lost, Cold Case, and October Road (with Laura Prepon, who plays Alex Vause on Orange Is The New Black). On the big screen, Henke has been seen in Fury, Jobs, and many more. Dude’s been working a long time, and now he’s hit Litchfield. While I trust Henke to play the role, frankly, I’m a little worried about how this Piscatella fella is going to pan out. He’s from maximum security, so the way he treats the inmates is way different. He’s used to a different kind of criminal — the hardened kind. So, when he screams at the women, uses his air horn at the women, and treats the women like chattel — that’s unnerving to me. We already have a CO that raped an inmate, it doesn't need to get any worse.

But, in the land of Orange Is The New Black, it can always get worse. Here are a few ways this Piscatella thing could pan out.

Piscatella Uses Excessive Force & Is Kicked Back To Max

Like I said, Piscatella doesn’t know how to deal with anyone but very violent criminals. He’s militant. I know some of the women in Litchfield have killed before, but they’re just not the kind of criminal he’s used to keeping in line. I say he’s going to step over the line with an inmate, someone is going to call the ACLU, and Caputo will have no choice than to get rid of him or force a lawsuit.

Maybe Orange Is The New Black can turn into Beauty And The Beast? He and an inmate, maybe Soso, can strike up a friendship that will make him see the inmates as humans and not a commodity.

What if Piscatella was putting up a front because he has a secret past and the FBI or something wants him? Secret identity, secret job — boom. He’s working in prisons so no one would expect him to be wanted for prison. Just remember, Piscatella — you can only run for so long.

While it’s very soon to tell what will happen to Piscatella in Orange Is The New Black, I can certainly say that his presence is not a good one at Litchfield.