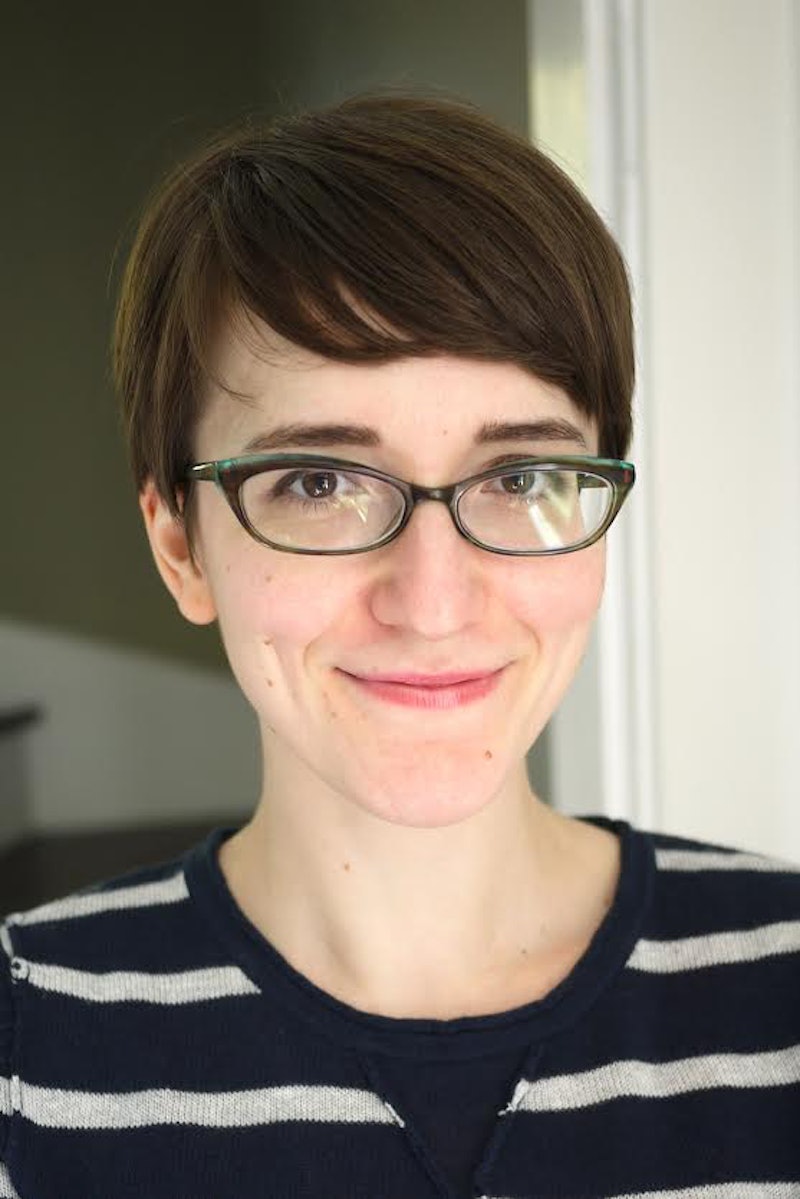 Fans of Vera Brosgol, rejoice! The Anya's Ghost author has inked a three-book deal with Macmillan Children's Books that includes two picture books and a middle grade graphic memoir, Be Prepared. Bustle spoke to Brosgol all about her new project, Be Prepared, and more in this Q&A, which features exclusive inner artwork from her upcoming graphic memoir.

Published in 2011, Anya's Ghost won the Eisner Award for Best Publication for Young Adults, as well as the Harvey Award for Best Original Graphic Publication for Younger Readers. The coming-of-age graphic novel centers on Anya, a Russian-American student who doesn't quite fit in at her New England private school. Anya befriends a ghost named Emily, and promises to help solve the mystery of her death. When Emily becomes more and more controlling, however, Anya begins to suspect that her ghostly bestie might not be as innocent as she claims.

Like Anya's Ghost, Be Prepared centers on a Russian-American girl. This time, however, it's Brosgol herself. Out in Spring 2018, Be Prepared is a graphic memoir "that recounts [Brosgol's] time at a Russian Orthodox summer camp in Upstate New York."

The three books involved in Brosgol's deal with Macmillan Children's Books will cater to a slightly younger audience than did Anya's Ghost. Brosgol's next release will be Leave Me Alone!, a picture book, which follows a grandmother so desperate to knit in peace that she travels all the way to the moon. That plot may sound a bit zany, but Brosgol knits for fun (and maybe she just wants to be left in peace?). Leave Me Alone! hits store shelves in September.

Brosgol's illustrations have been featured in Fionna and Cake No. 1, Marceline and the Scream Queens No. 3, and elsewhere. She and fellow writer/illustrator Emily Carroll collaborated on Draw This Dress, a Tumblr art blog where they reinterpreted the fashions of yesteryear.

Even if you don't read comics, you're probably familiar with Brosgol's work. In 2014, the author and artist helped bring Alan Snow's novel, Here Be Monsters, to life on the big screen as The Boxtrolls. Brosgol also worked as story artist on ParaNorman , and as a storyboard artist on Coraline.

We've got a long wait until Be Prepared comes out, but Brosgol sent over some lovely inner artwork from her upcoming graphic memoir, which Bustle is proud to exclusively share. Read more about Be Prepared and check out Brosgol's art below.

1. So, let's talk about Be Prepared. When does it come out? How can we compare/contrast it to Anya's Ghost?

"It’s coming out in Spring 2018. Like Anya’s Ghost, it’s about a Russian-American girl and deals with her struggle to fit in, but that’s about it for similarities! It’s a memoir about nine-year-old me, attending a Russian Orthodox summer camp. The target audience is a bit younger (middle grade rather than young adult) and there are zero ghosts. Just ghost stories."

2. Be Prepared is a summer camp graphic novel, but all summer camp tales are a little bit different. Some have ghosts and adventures, others are pure nostalgia, and the rest fall anywhere in between. Which former — or current — campers will love it?

"I went to a few summer camps as a kid, but this one was definitely the most… rustic. A large part of the story is me coming to grips with not having access to a real bathroom. My time at camp was full of loneliness, physical discomfort, and social anxiety — this is not a glowing memoir of simpler happier times. Childhood can be pretty dark and unpleasant and I think readers that had a hard time as a kid (at camp or otherwise) will find something to relate to. So will readers who enjoy poop-jokes."

3. You write, you knit, you paint and draw... What's your favorite medium to work in? Are there any that you want to start — or get better at — using?

"I have to do a lot of my work digitally because that’s how the world works now, but I love any excuse to use traditional media. I have a picture book called Leave Me Alone (out in September from Roaring Brook Press) that I did in ink and watercolor and it was such a treat. There’s something so nice and tactile about real paint on real paper and I love having all the original paintings in a drawer like a little time capsule. I still feel like a fumbly idiot-baby with watercolors but I figure I’ll get better if I keep practicing. And if I stop drinking the paint water."

34. Has anyone found the missing pieces to #puzzlenightmare2016 yet?

"The missing pieces never turned up!!! The puzzle went back in the box and a series of disgruntled tweets were dispatched to the puzzle manufacturer. Were those pieces ever in there to begin with? Did some drunk dummy accidentally put them in the dishwasher stuck to the back of a plate? We will never know the answers to those questions."

Sounds like a mystery for Anya's Ghost 2: The Puzzling. Just sayin'.

5. I think that, with your knitting and illustration expertise, you should write an indie comic amigurumi book. What do you say?

"Sold. Will work for yarn."

6. Is there anything else you'd like us to know?

"I just knit twenty-five adorable tiny sweaters to give away to promote my picture book and I’m debating kidnapping them and running away instead."