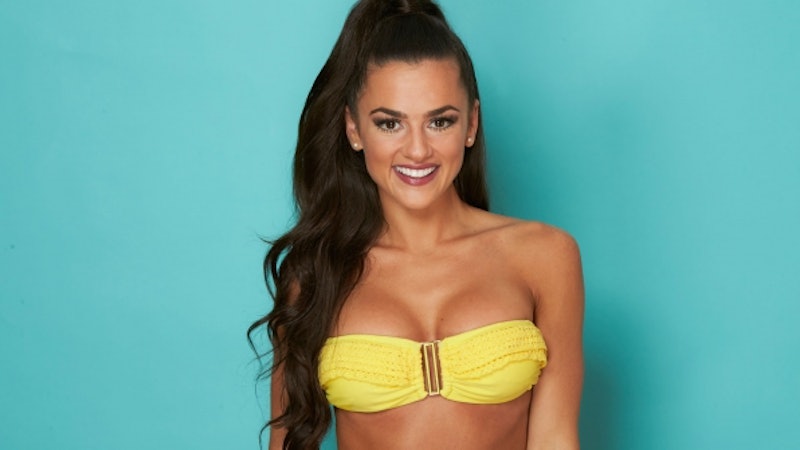 Big Brother 18 revealed their new houseguests on Tuesday, and though the list is not fully revealed yet (only 12 of the 16 contestants that will make and break alliances to win the $500,000 prize have been named), it's already clear that the competition will be off the charts this year. One of the competitors is Natalie Negrotti from Franklin Park, New Jersey, who describes herself, according to CBS, as "altruistic, athletic, and beautiful." And one thing's for damn sure: she is confident, and that can be a key weapon in the Big Brother household.

Negrotti is 26 and an event coordinator, although she was formerly a pageant girl and an NFL cheerleader, according to Big Brother Network. She cheered for the New York Jets! Negrotti was born in Caracas, Venezuela, and described herself to CBS as "super girly," enjoying things like painting her nails, shopping, pageants tanning, doing her makeup, party planning, and looking at puppy videos. Unfortunately she's not on Twitter and her Instagram account is private, so no pre-show stalking is possible unless she accepts your follow request — but she's probably getting flooded with them right now.

Negrotti's got a beautiful smile that is actually kind of frightening paired with the hunger in her eyes to win, but maybe that's just the cast portraits. But the rest of the house would be remiss to underestimate her, because she is here to win. As she told Big Brother Network, she already has her strategy in place, and it is impressive: Negrotti plans to "fake everyone out with my kindness and act very innocent and will stay low for the first week and won’t win the first challenge. Then, I will start showing I’m a powerful force not to be messed with." She's using her beauty, she says, to throw people off their game, because she's been underestimated all her life because of her looks.

She's scrappy, too. Negrotti said that she has faced a lot of adversity in her lifetime that has led her to be resourceful, and learned a lot from her difficult childhood. "I’m very kind, but I’m very tough and have street smarts since I was raised by a single mother,” she says. “I’ve had to work my whole life and helped my mom pay her bills when I was in high school."

In a profile of Negrotti from the New York Jets in 2013 when she was part of their "Flight Crew," the then 23-year-old talked about how she failed to make her high school dance team, but pursued her dream even harder in college, inspired by her father's longterm illness, which he beat. She also said she was proud of and passionate about her heritage, and at that time was the only bilingual member of the Flight Crew.

The only thing Negrotti doesn't know how to do is live with men — something she has never done, according to the CBS website, as she lived alone in her house with her mother growing up. But, like she told the Jets back then, "Throw me down, push me down, I’m still going to get up and keep pursuing my dreams." And her motto now? "Work hard, play harder," which by that I assume she means play the game harder, because she is here to win.