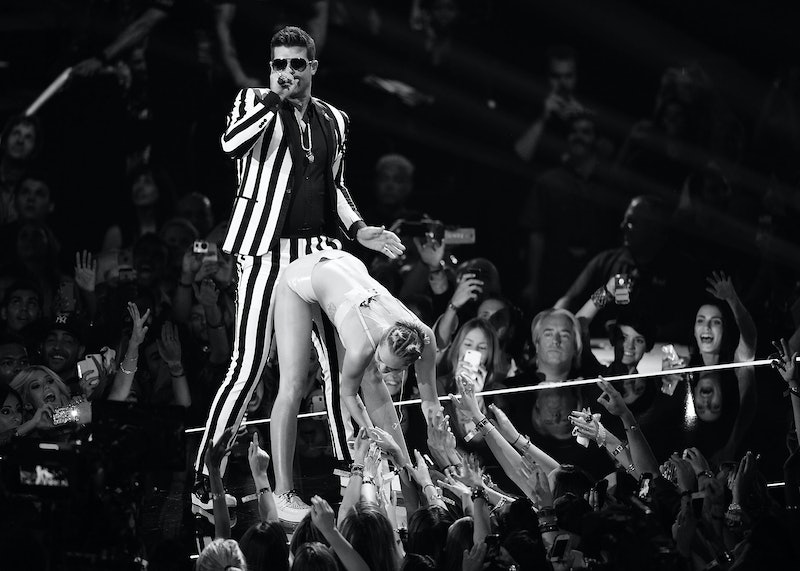 Miley Cyrus grinding against Robin Thicke's crotch at the 2013 MTV VMAs caused a huge hoopla afterwards in the media on multiple levels. What will children think? What's become of our society? And, What will Thicke's wife think of him grinding in front of the world with another woman? Patton made jokes about the incident afterward, and told Al Roker on Today , "I don't know if you guys have been to a club lately, but that's how girls dance at the club. My friends dance with [Robin] like that. It's just what they do." Now, TMZ is reporting that Paula Patton felt humiliated after Robin Thicke grinded with Miley Cyrus onstage.

The outlet's sources say that Patton felt "utterly disrespected" when Thicke got into the act with Cyrus, and got in a huge argument with him after the show, telling him he insulted her in front of the nation. Even though Patton knew that the performance would be raunchy, she was surprised that Miley improvised grinding against Thicke's crotch, and was furious that Thicke reciprocated.

Patton was also reportedly very unhappy about the photo that surfaced of Thicke grabbing another woman's rear, and their marriage went on a downward spiral after that. Patton announced on Monday that she was separating from Thicke.

And just in case you need a refresher on Thicke and Cyrus' performance, you can re-live it again below: