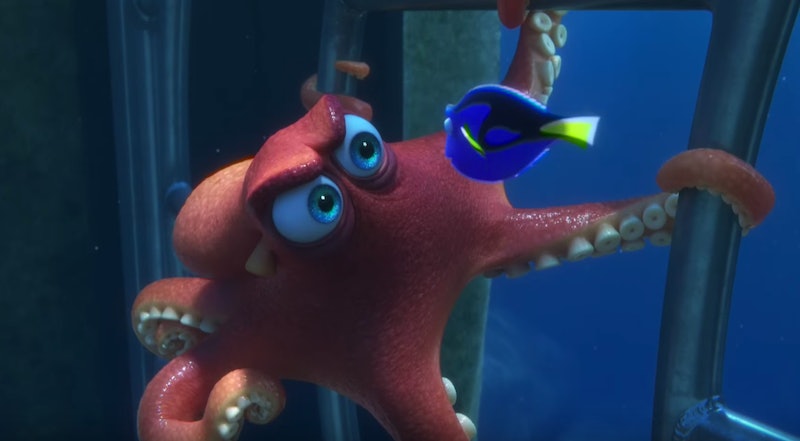 Oh, what a difference 13 years make. Babies born when Finding Nemo was released in 2003 are now teenagers, and, if humans can change that much in those years, just imagine how much has changed in the world of animation. The technology has grown tremendously over the last several years, and as a result, Finding Dory, the long-awaited sequel to Finding Nemo, might not look like the Finding Nemo you remember. The animation in Finding Dory vs. Finding Nemo shows that the new movie is miles ahead of its predecessor, and the Pixar animation upgrade will show you Dory, Marlin, and Nemo in a brand new way.

Since Finding Nemo's release in 2003, Pixar has released 11 films, each time learning new techniques of animation and developing new filmmaking tools. Technological leaps between films can be great. In a report from Movie Pilot, it was noted that animation advanced so much between the productions of Brave (2012) and Frozen (2013) that the animation of individual strands of hair for each main character rose from 1,500 on Merida to 400,000 on Elsa. For Finding Dory, the leaps made in technology allowed director Andrew Stanton and the animators to create more realistic water environments. Looking at the difference between Finding Nemo (top) and Finding Dory (bottom), one can't help but notice the major distinction in how the light is animated in the water.

The striking difference in animation comes from the development of Renderman RIS, a new Pixar animation tool that allows animators to manipulate light more precisely and add more nuance to the light refracting in the water. In an interview with IndieWire, Technical Director John Halstead said that Renderman RIS, in addition to KATANA, a new rendering software, were especially useful for sequences at the Marine Life Institute because "that environment has so much glass and water, and now we're able to describe that."

The tech also allowed for filmmakers to feature multiple shots of characters and objects breaking the surface of the ocean, something done only a few times in Finding Nemo. As any physics student knows, when light hits water, it bends, or refracts — something that was very difficult to animate in 2003. Now, it's much easier. "Because of KATANA, we could truly be on the surface of the water, have all kinds of interactions — splashing, waves breaking, refraction — that you would have in real life," said Finding Nemo and Finding Dory director Andrew Stanton in an interview with Film Journal International.

New technology also allowed for the creation of more complicated characters, like Hank, the grumpy octopus who meets Dory at the Institute. Hank was, according to filmmakers, one of the toughest characters to animate because of his many moving parts; seven tentacles (he lost one) and a malleable body and head made him particularly tricky. "Hank's very much like water, he's never the same shape. Every inch of him is bending and folding and changing shape and size and volume at all times. There's nothing constant about him except maybe his eyeballs," Stanton told Film Journal International.

Hank's character supervisor, Jeremie Talbot, told IndieWire that animators researched everything they could about the movement of an octopus, from how their tentacles worked to how their face would move in certain movements and everything in between. Different groups worked on different perspectives to help create the perfect character, Talbot explained. "How do the suckers work? Simulation took on that task. What about the webbing between the legs and how that interacts with the face? The character department tackled that. And the art department figured out the overall aesthetic of Hank and how that fit in with the limitations of technology."

With so many moving parts, its no wonder Finding Dory took three years to make. One thing is clear: the next Finding Nemo movie is going to look even better.