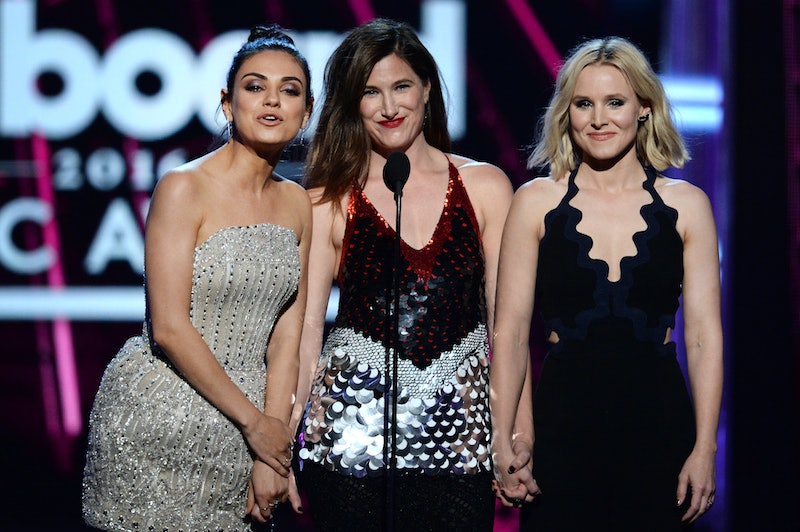 It might come as a surprise to learn that all six women leading the new movie Bad Moms are, in fact, moms; after all, in Hollywood, you don't exactly have to share the same traits (or often, even be the same race) as a character in order to get a part. Yet the upcoming comedy stars Mila Kunis (mom of one), Kristen Bell (mom of two), Kathryn Hahn (mom of two), Jada Pinkett Smith (mom of two), Christina Applegate (mom of one) and Annie Mumolo (mom of two). Throughout the film's production, all six women brought their parenting wisdom to the table — something that directors Scott Moore and Jon Lucas didn't require, but nonetheless were glad to have.

"I think women who aren’t moms often play moms really sweet, and I think people who actually are moms play moms way more badass," says Lucas, speaking on Bad Moms' New Orleans set. "You pitch them a joke and they’re like, 'oh, I want to take that further,' rather than 'oh, would I really say that to a child?'"

Lucas and Moore didn't plan on having six moms make up the cast of their new movie, in theaters July 29. They reveal that they "sat down with a lot of women" during the casting process, many of whom weren't mothers themselves, but ultimately realized that hiring moms would make a big difference.

Says Lucas, "It wasn’t a criteria that we hired moms, but we met with one actress, who will remain nameless, who was like, 'oh, I’m not a mom, but I have a dog,' and we’re like 'oh, well, it’s really, really different."

Ultimately, they settled on their six lead actors, a group that, judging from the chemistry they share on set, couldn't be a better fit. Moore recalls meeting with each actor to determine if they were right for their parts and being immediately convinced. Says the director, "I remember sitting down with Kristen Bell and we’re like, she’s “she’s so Kiki."

Of all the stars, Kunis has the biggest role in the film, as a mother on the brink of a breakdown, but the directors say that her castmates, especially Bell and Hahn, are key to her success. "Having three is great just comedically," explains Lucas. "At the center of the movie is Mila — she can be funny but in some ways she has to carry the emotional weight of the movie, and so it’s good to have two people on her side who, whenever you need humor, you just dial up their numbers, and they make it fun."

Both Lucas and Moore, best known for directing the Hangover trilogy, seem proud to have cast so many talented women in their movie. Says Moore, "When we were looking to do the project, it was what we were experiencing in our lives and watching our wives, but when we started to get into it, it was nice and refreshing that we were casting six women. I think that was really embraced by the film community and the producers."

Adds Lucas, "It was more writing from a perspective of what we’re going through — we’re not going to Vegas anymore and doing those things… it’s really about writing from our personal experience, which is like, this is what we deal with every day." That's something all adults can certainly get behind.