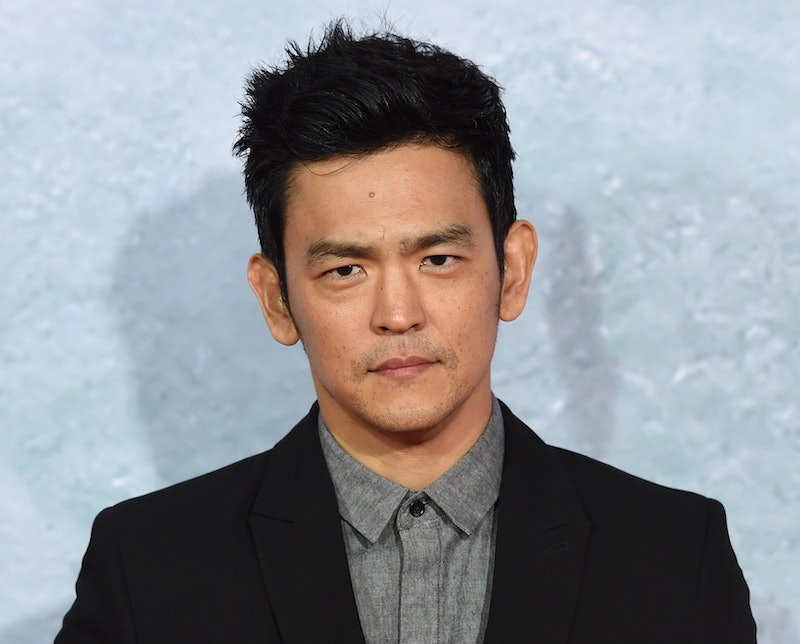 There's a new Twitter account that is adding some humor and levity to the very frustrating conversation about the whitewashing of Asian and Asian-American roles in Hollywood. @StarringJohnCho, created by 25-year old digital strategist Michael Yu, is, as his website says, "a social movement that literally shows you what it would look like if today's Hollywood blockbusters cast an Asian-American actor — specifically, John Cho — as their leading man." The project, which reimagines popular Hollywood movies with Cho in the main role, is pretty hilarious, and it has Cho's stamp of approval. But as funny as the Photoshops from @StarringJohnCho are, the project is making a seriously important point: where are the Asian-American leading roles?

The lack of Hollywood movies starring Asian actors has long been an issue, yet events in recent months have brought it into the spotlight. Earlier this year, attention was paid to the fact that Tilda Swinton was cast as The Ancient One, originally written as a Tibetan man, in the upcoming Doctor Strange film (Marvel has said that Swinton's character is "Celtic"), and that Scarlett Johansson was set to play Major Motoko Kusanagi in Ghost In the Shell, a live-action version of a Japanese anime film. Both castings elicited criticism, and made the scarcity of Asian roles in Hollywood films all too clear.

On his website, @StarringJohnCho creator Yu lists the whitewashing of the above characters and others as the reason that his Twitter project is vital, and he asks people to "join the necessary conversation" on social media. It's clear that something needs to change; in February 2016, a University of Southern California Annenberg study on Hollywood diversity called the lack of roles for people of color "an inclusion crisis," and noted that, in over 414 films and TV shows, only 5.1 percent of leading roles in Hollywood were given to Asian-American actors in 2014-2015. It also found that "at least half or more (52%) of all cinematic, television, or streaming stories fail to portray one speaking or named Asian or Asian American on screen."

@StarringJohnCho is not the first Twitter movement to call attention to the painful erasure of Asians and Asian-Americans in the media. After the Academy Awards, in which host Chris Rock made a joke at the expense of Asian-Americans, #OnlyONEpercent called attention to the fact that only one percent of leading roles in Hollywood go to Asian-American actors. In early May, Margaret Cho teamed up with Nerds Of Color and We Need Diverse Books for Asian Pacific American Heritage Month to organize #whitewashedOUT, in which Asian-American actors and writers revealed their experiences with racism throughout their careers. And even more recently, #MyYellowFaceStory started trending, and the hashtag was used for Asian-Americans working in theater and film to reveal the discrimination they have faced.

And now, the @StarringJohnCho account is shining a light on Hollywood's major diversity issue. One of its most notable Photoshops is of The Martian, which, as producer Janet Yang noted, was culturally inaccurate in its scenes set in China. Speaking to The Hollywood Reporter , Yang noted that the film featured actors speaking with incorrect accents, and said, "Why didn't they bother to get it right? What I hope will be achieved is very honest conversations. [U.S. studios] will benefit from a Chinese partner who can cast with the right stars who can be authentic."

As The Hollywood Reporter noted, the only real solution to Hollywood's lack of diversity is more opportunity, and unfortunately, the onus of that opportunity has fallen on the shoulders of Asian-Americans, who often don't have the same power in the industry as white people. So it's up to all the Hollywood power players who can do it to take the reins and work to increase diversity. As Alan Yang, co-creator and star of Aziz Ansari's Netflix series Master Of None, told THR: "For those in power, it’s on you to create stars who aren't just straight white guys."

One such power player is doing just that. JJ Abrams, who cast a black man and a Latino man in two of his leading Force Awakens roles, has cast newcomer Kelly Marie Tran, an Asian actor, in the as-yet-untitled Episode VIII. Abrams told THR in March that he was purposefully looking to cast diverse actors in his films, saying, "We’ve been working to improve our internal hiring practices for a while, but the Oscars controversy was a wake-up call to examine our role in expanding opportunities." As the huge financial success of The Force Awakens proved, minorities in leading roles can rake in just as much dough at the box office as films with white actors in leading roles. It's up to Hollywood to give them a shot.