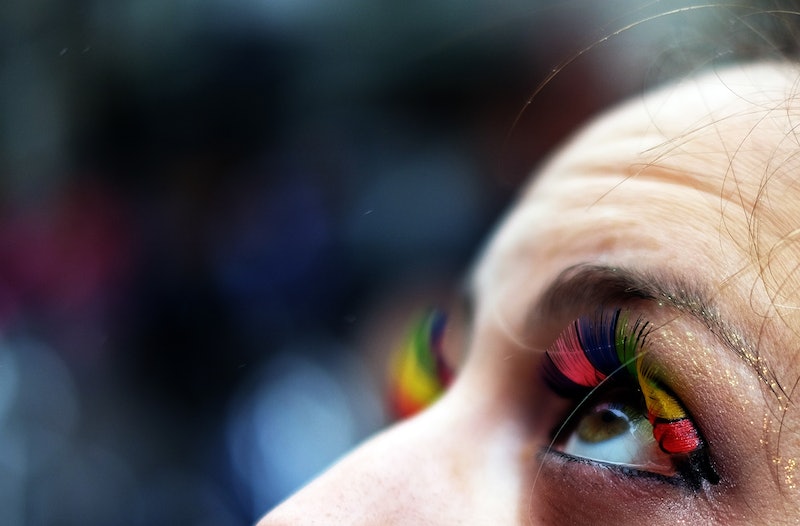 It's Pride Week! While you're painting your face rainbow and sourcing any glitter you can find (if you live in a major Pride city, you'll already know it's been sold out for days), let's take a look back at the history of the worldwide Pride movement and Pride Week, and what exactly drove the first innovators to step out onto city streets and hold parades to boost the visibility and fight for the equality of the LGBT community. It may not surprise you to know that for many of them, the motivator was anger, and a desire for public recognition in the face of societal prejudice and bigotry. We may dance and revel in the glorious floats and music, but these events have a political purpose, one that's even clearer than usual in the wake of the Orlando massacre.

Luckily for us, many major LGBT Pride events are up on their history. The organizational body that manages the Pride celebrations for New York City, one of the most seminal locations for the history of Pride, is called Heritage of Pride, and is explicitly focused on both the future and the legacy of Pride events. It's an important reminder that even joyful, loud events can have complex undertones, with participants both protesting and reveling.

So as you have a fantastic (and safe) Pride this week, remember the origins of the idea, which came from riots, thousand-strong marches, demonstrations, and international outrage. LGBT history matters, now as much as ever.

The foundation both of modern Pride Week and of the LGBT activist movement in the West can be pinpointed, according to many historians, on one the Stonewall riots of June 1969 in Greenwich Village, NYC. If you're not up on this particular seminal period in LGBT history, police raided the Stonewall Inn, a known LGBT venue on Christopher Street, in the early hours of June 28 1969, sparking a series of protests and marches that would have far-reaching consequences.

The police raid, one in a long series targeting LGBT venues (though, on this occasion, they were legally permitted to raid it, because of violations of liquor legislation), sparked indignation and outrage among the patrons, who sparked a protest that became a riot as up to 600 people raged, threw things, and chanted "gay power". Community fury was so strong that rioting resumed the next night, this time with a crowd of about 1,000 that was only dispersed by a riot squad. It's now viewed as the LGBT community's watershed moment, its powerful protest against oppression and legal injustice. The nights of rioting have become so symbolic that both Germany and Austria refer to their particular Pride celebrations as Christopher Street Day.

The original impetus for LGBT Pride parades came from the need to commemorate the Stonewall riots, and the idea first emerged for one in November 1969 among a group of NYC activists including Craig Rodwell, who also founded the Oscar Wilde Memorial Bookshop. They created a famous proposition:

There were schisms between LGBT activists as to the best ways to commemorate Stonewall and fight for greater visibility. The Mattachine Society, one of America's oldest gay rights associations, protested quietly in July 1969 in front of the Independence Hall in Philadelphia, calling it an "Annual Reminder". Rodwell and his friends thought this wasn't big or bold enough, and proposed their Liberation Day to make the Annual Reminder "be more relevant, reach a greater number of people, and encompass the ideas and ideals of the larger struggle in which we are engaged". It was always an LGBT event: the first originator of the word Pride was Brenda Howard, a bisexual woman known as the "Mother of Pride," and trans activists played large roles as well.

The first simultaneous pride events were held across the U.S. on June 28 1970: the first parade for gay rights in Manhattan, New York, a march in Los Angeles, and a "gay-in" at the Golden Gate Park in San Francisco. Doric Wilson, the American playwright, told the documentary Stonewall Uprising that,"In those days, the idea of walking in daylight, with a sign saying, 'I'm a faggot,' was horrendous. Nobody, nobody was ready to do that." That the parades happened at all is testament to the fury and bravery of the people involved.

1979: The National March On Washington For Lesbian & Gay Rights

The movement towards annual Pride weeks and parades hasn't just been unilateral; it's been a combination of different threads and circumstances, some tragic, that caused the idea to become more entrenched. One of those circumstances was the National March on Washington for Lesbian & Gay Rights, which happened in 1979 just after the 1978 assassination of Harvey Milk, a San Francisco politician who'd been the first openly gay person elected to public office in America. According to Heritage of Pride, this was the first time that a political movement on behalf of LGBT rights gained national attention.

Milk's assassination added to the desire of activists to commemorate the 10th anniversary of the Stonewall riots, and approximately 100,000 LGBT people and their allies joined the march on October 14. Astonishingly, the records of the organizers, from over 200 different LGBT organizations nationwide, were lost for years before being found in a closet (of all places) in the Lesbian and Gay Community Services Center in NYC in 1990.

It was in the 1970s and '80s that the Pride concept spread from the U.S.'s major cities across the nation and to other countries. Some were earlier adopters than others: London's Pride, which is now one of the most fabulous and extensive in the world, first emerged as a small group of street protesters in November 1970, and held its first commemorative parading event for Stonewall in 1972. Australia followed suit in 1978 and France in 1982 after a campaign to equalize the age of consent, while Toronto's Pride Week evolved out of its own riots in 1981 when bathhouses were raided by Canadian police. (The bathhouse raids resulted in protests by over 3,000 people, a public apology by the Police Chief and the acquittal of the majority of those arrested.) Most cities in the U.S. had an annual parade by the mid-'80s, but various countries worldwide are still new to the tradition; Greece has only been able to hold Pride events since 2005.

The 1990s were an interesting time for Pride celebrations around the world. The Encyclopedia of Lesbian and Gay Histories and Cultures explains that this was a time of mass growth for Pride parade organization, developing from grassroots activism and protest into bigger, more varied and celebratory event with more inclusion: marches began to be explicitly open to allies, friends, and family, particularly in organizations like PFLAG (Parents & Friends Of Lesbians And Gays).

But it wasn't a universal party. Queer academics famously criticized the Sydney Gay & Lesbian Mardi Gras in 2000 for being what Lynda Johnson and Gordon Waitt called "sites of a particular, normalized understanding of gay masculinity, that of white, young, gym-toned bodies." And The Independent reported that in the 1990s, the party spirit and inclusivity were creating issues: some activists felt that the parades were "swamped by straight women... there was a lot of anger from certain elements of the gay community that it was being taken over and had turned into more of a party than a political movement."

Nevertheless, Pride has kept changing and expanding. The flavor of Pride celebrations across the U.S. after marriage equality was declared in 2015 showed that politics has never been far from the party, and defiant 2016 celebrations continue that theme. From "gay & lesbian," the labeling of the community celebration has expanded from LGBT to LGBTQA, and the annual events have become the lynchpin of activism and celebration for LGBTQA communities worldwide. And certainly, this year, in the wake of the Orlando massacre, the need to be publicly proud is more pertinent than ever. May you have a safe and happy Pride!