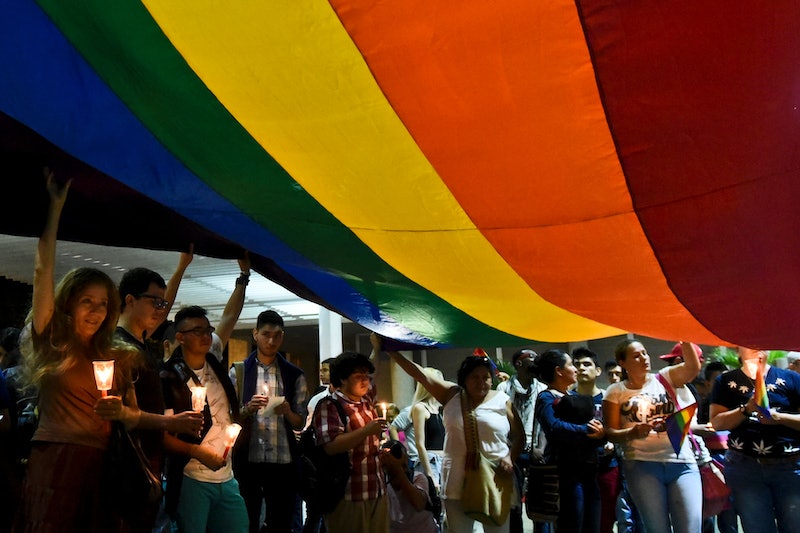 There's a lot to the history of LGBTQ Pride Month, from when it started to how it's celebrated. But one basic question that many keep coming back to is this: Why is it called "Pride," anyway? As a queer person myself, I've gathered a decent amount of knowledge on the subject through my own research and curiosity; however, this knowledge isn't necessarily innate, and sometimes it's difficult to know where to start when you begin looking into it all. It can also be a real challenge to learn your own history if you're part of a minority or oppressed group, so let's explore the topic together.

In general, queer history isn't taught in schools, so it makes sense that a lot of people associate Pride Month with their local Pride Parade (assuming, that is, that their city even has one), glitter, and feather boas — that's what it looks like from a purely visual perspective. In truth, though, there's a lot of activism and advocacy that went into the creation of Pride Month; it was designed as a means for the queer community to gain equal rights, after all, so there's much more to it than meets the eye.

So let's go back to the origins of Pride: Why the word "Pride"? Who came up with the term and bestowed it upon the month-long celebration? The term "Pride" to represent the LGBTQ community goes back to the Stonewall Inn riots in 1969. Brenda Howard, a bisexual woman, is known as the "Mother of Pride" for her work in organizing the first LGBTQ Pride March, which occurred on a Sunday in June. Howard also organized an entire week of activities around the Pride March, which created the basis for Pride Weeks around the world.

Howard's peers, including Robert A. Martin (known as "Donny the Punk") and L. Craig Schoonmaker, also heavily supported and publicized the use of the term "Pride" at its inception; additionally, Sylvia Rivera, a trans woman whose speech given on Christopher Street after the Stonewall riots played a huge role in the development of Pride, supported the use of the word. Rivera worked to give particular focus to the transgender and gender non-conforming parts of the queer community during the era of the riots.

It's actually difficult to surmise what exactly motivated Howard and her contemporaries to choose the word "Pride" back in the late '60s as the world the queer community fought to survive in was much different; unfortunately, there is no recorded history (or at least, not that I was able to find in my research) as to why Howard chose "Pride"and why the word stuck so firmly. It's worth considering, though, when we look back on the meaning of the word "pride" itself and its usage within the queer community, just how different society was at the time of the Stonewall riots. For instance, people were regularly jailed for homosexual activity, sent to mental institutions to "cure" their sexuality, and shunned by their families and communities for coming out. In many ways, Stonewall was not a celebration, like many contemporary Pride events, but a revolt against oppressive laws and stifling societal values — a revolt that encouraged us to speak up proudly instead of hide ourselves away.

And when it comes to the personal significance of Pride, talking about the origins of the event and etymology of its name can be a strange thing. While the queer community is inclusive of many identities and orientations, the queer experience is different for everyone; as such, the meaning of Pride, both as an event and as a word, means something different for everyone. In my own opinion, Pride in contemporary day is largely about immersion and acceptance. Our society understands in a general way that LGBTQ people exist and recognizes that we have some degrees of equality, but that it's still a work in progress to obtain legal protections across the board. For many of us, "Pride Month" means celebrating and accepting who we are and living freely and openly.

Over the years, we've made a lot of progress as a society when it comes to LGBTQ rights, such as our advances in marriage equality, but there is still a world of work to be done. For instance, LGBTQ people are still fighting for equal protection when it comes to adoption, access housing, employment protection, and medical care. All of this, of course, reminds us of why we still need Pride month, and why LGBTQ visibility matters so much.

More like this
The 19 Best Tweets & Memes About Bisexual Awareness Week
By Lexi Inks
An Honest Review of MeUndies Boxers, According To A Non-Binary Person
By Megan Lasher
Pro Footballer Zander Murray Is "Blown Away" By Support After Coming Out
By Sam Ramsden
'Heartstopper' S2 Just Welcomed Four Brand New Cast Members
By Nola Ojomu and Sam Ramsden
Get Even More From Bustle — Sign Up For The Newsletter