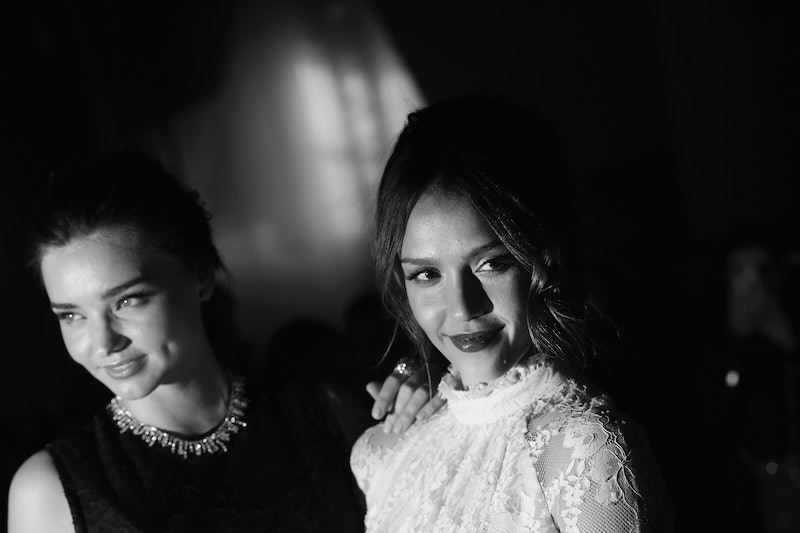 If there's one thing that's distressingly clear, it's that practically every woman has a story about her complicated relationship with food. Of course, that includes celebrities. During National Eating Disorders Awareness Week, here are some of the celebrities who have been honest about their battles with eating disorders.

Perhaps because she was suffering around the same time that Lindsay Lohan and Mary-Kate Olsen were getting most of the attention for their dramatic weight losses, Hilary Duff's eating disorder went mostly under the radar.

I got pretty skinny when I was between 17 and 19. I don't know what exactly made me get on that kick, but at the time I was starting to become aware of what people said about me and how I looked in pictures. I literally ate nothing but steamed vegetables and broiled or grilled chicken, with nothing else. I was touring at the time, traveling everywhere, and I felt so run down. Not giving your body enough of what it needs is really dangerous. I regret it because I don't think I was happy then.

Duff says that's when she eased back on her fitness and diet routines. She told Us Weekly, "I don’t want to be so skinny that people are like, Oh my god, she’s lost a lot of weight." Duff says that instead of counting fat grams or calories, she now just tries to eat healthy foods.

In 2006, Lohan admitted to Vanity Fair that she was bulimic. "I was sick, and I was scared too. I had people sit me down and say, ‘You’re going to die if you don’t take of yourself." Amazingly, Lohan credits Saturday Night Live producer Lorne Michaels and Tina Fey with helping her by staging an intervention.

In the '80s, Fonda was known as the queen of working out. "Gloria Steinem said empowerment begins in the muscles," Fonda remembers.

"I was raised in the '50s. I was taught by my father [actor Henry Fonda] that how I looked was all that mattered, frankly," she told Harper's Bazaar. "He sent messages to me that fathers should not send: Unless you look perfect, you're not going to be loved."

Fonda admits she struggled with bulimia from the age of 21-on. She says it was launching her exercise empire in 1982 that helped her recover. "I had a career, I was winning awards, I was supporting nonprofits, I had a family. I had to make a choice: I live or I die."

There are few celebrities who have been quite as honest about their eating disorder as this singer/actress. In 2010, Lovato entered rehab for bulimia and self-mutilation.

"When I was four years old and I remember looking in the mirror and thinking I was fat. I was constantly feeling guilty about my weight," Lovato said in her MTV documentary.

Going through puberty in front of the world didn't help. "Even when I did lose 20 lbs when I turned 12 because I stopped eating, it’s never enough. It was an obsession of the mind," she said.

Today, Lovato says she is much healthier. But she is the first to admit that she will never be cured. "Recovery doesn’t have a day off ... I don’t think there is a finish line I just think you keep going."

Way back in 1999, Jessica Alba had just landed a role in the James Cameron television series Dark Angel. To prepare for the role, Alba started an intense training regimen, which she says eventually led to a bout with anorexia. She admitted to starving herself and becoming obsessed with exercise; at one point dropping to 100 lbs.

"A lot of girls have eating disorders, and I did too," Alba told Glamour. "I got obsessed with it. When I went from a girl's body to a woman's body with natural fat in places, I freaked out." Alba says that "with treatment I have now conquered the fear that drove me to become dangerously thin."

The American Idol star was a long-time sufferer of bulimia.

"When I made it onto American Idol, I knew that food — my eating disorder — was the one thing really holding me back," she says. "I was bingeing my whole life away for days at a time … So when I got on the show, I said, 'You know what? I can do well in this competition. Let me give myself a chance and just get ahold of this thing.'"

It takes a real man to be honest about his eating disorder, and boy, is Brand honest.

"I was bulimic when I was 14,” he told The Daily Mail. "I had problems with food and self-harming … my feeling about my childhood was that it was lonely and difficult." Brand’s bulimia resurfaced when he went to rehab for drug abuse. "It was clearly about getting out of myself and isolation. Feeling inadequate and unpleasant."

Today, Brand says he is working on his eating disorder by following a healthy diet and practicing yoga.

The actress writes about her horrific nightmare battle with anorexia in her book Unbearable Lightness: A Story of Loss and Gain . At one point, de Rossi was down to 82 pounds and eating 300 calories a day (many of us may remember this shocking picture).

Though she had been dealing with eating issues since she was 12, de Rossi admits it really got bad when she joined the cast of the hit show Ally McBeal in 1998. The show was known for its very thin actress aesthetic (led by Calista Flockhart).

While filming Ally, "I was constantly looking for external validation," de Rossi told Oprah Winfrey in 2010.

She reportedly collapsed on the set of the film Who Is Cletis Tout? The actress was suffering from cirrhosis, oesteoperosis, and organ failure.

After time and treatment, de Rossi says she feels better about her body today. She says that when she looks in the mirror, she knows she's not perfect, but that it's OK with her.

Like many child actresses, Ricci found the transition of growing up in the public eye to be difficult.

"Somebody actually found out about it and outed [me] while I was recovering [from an eating disorder]. It was a horrifying thing to do to a 14-year-old trying to cope with a devastating illness," Ricci told Marie Claire UK. "And, out of rage, I vowed that no one would ever be able to out me for a secret again. So I was going to be completely honest in the rest of my life. I don't want to be hurt in that way again."

Ricci also discussed her battle with anorexia on The Talk last January.

More like this
Wimbledon Alters All-White Kit Rule Amid Candid Period Discussions
By Catharina Cheung and Rachel Mantock
Ashley Benson Revealed The Whole-Body Effects Of Her Anxiety On TikTok
By Stephanie Topacio Long
Chris Hemsworth Is Taking Time Off From Acting Due To Alzheimer's Predisposition
By Jake Viswanath
Emily Ratajkowski & Pete Davidson's Astrological Compatibility, Revealed
By Nina Kahn
Get Even More From Bustle — Sign Up For The Newsletter