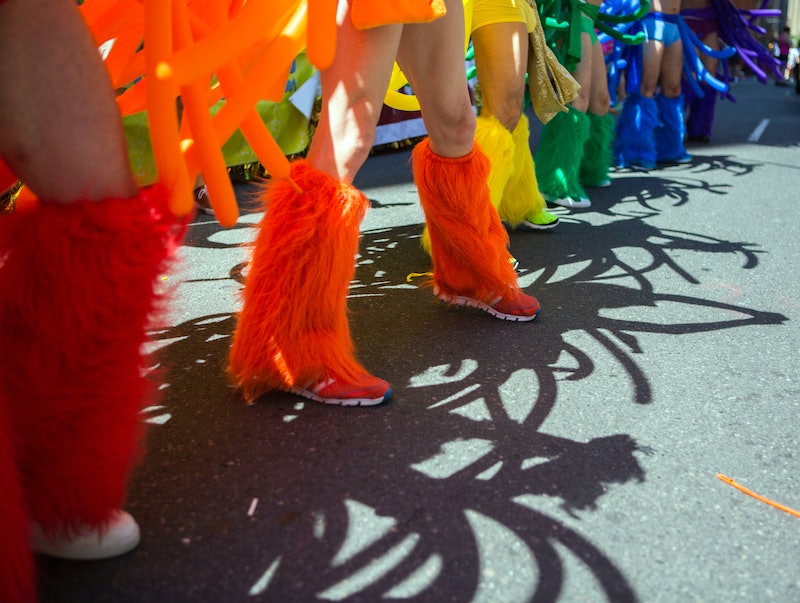 In the days since the Orlando massacre, the question of how to celebrate LGBTQ Pride safely has been on many minds. The shooting, which killed 49 people (the vast majority of whom were LGBTQ people of color) and hospitalized 53 others, occurred during the middle of Pride Month, and as a result, LGBTQ people across the country have been understandably worried for their safety at events celebrating their sexualities and gender identities. In fact, authorities apprehended a man carrying assault rifles and explosive materials who was headed to the Los Angeles Pride Parade on Sunday, mere hours after the attack on Pulse nightclub on the other side of the country.

Pride celebrations have bravely continued after the shooting, usually incorporating support for the Orlando victims into the events. However, in light of the massacre as well as the United States' history of violence against the LGBTQ community, it's more important than ever to take steps to protect yourself when headed to a pride event. This isn't to say you shouldn't enjoy yourself, but hatred and prejudice hasn't vanished just because same-sex marriage was legalized last year. As always, it's better to be prepared than to be caught unawares. To that end, here are six ways to make sure you're celebrating Pride Month safely — it's not an exhaustive list, but it's a start.

The buddy system is one of the most basic rules of safety; the Centers for Disease Control even used it during the Ebola outbreak to protect staff members. Bringing someone with you to an event means you'll both be looking out for each other — besides, it's more fun to celebrate with people you know. Once you're at the event, make sure you stick to your friend like glue.

2. Be Aware Of Exits

If an event is inside, and particularly if it's crowded, always make sure you know where the exits are in case you need to leave quickly. Furthermore, plan an exit strategy so you know what to do if an emergency happens.

3. Check Out The Surrounding Area

In the event that you do have to leave unexpectedly, or in case you simply get lost, it's best to have an idea of what the surrounding area is like. With that in mind, don't just put the event address in your GPS and roll out; be sure to look at a map so you're at least passably familiar with where you're going.

4. Tell People Where You're Going

It may seem like a no-brainer, but tell people where you're headed and what time you think you'll be back, especially if you're going to an event alone. If something unexpected happens, they'll be aware much faster if they know to expect a call or text.

It's tragic that this has to be taken into account, but take note of news and social media regarding the event to make sure it hasn't been cancelled and no threats have been called in. If you're not comfortable going (for whatever reason, or for no reason at all), just don't go.

Phones are likely to be your point of contact for people in your own group as well as outside the event in case of an emergency. Make sure it's charged before you go, and if you think it might die while you're there, you may want to consider carrying a portable battery.