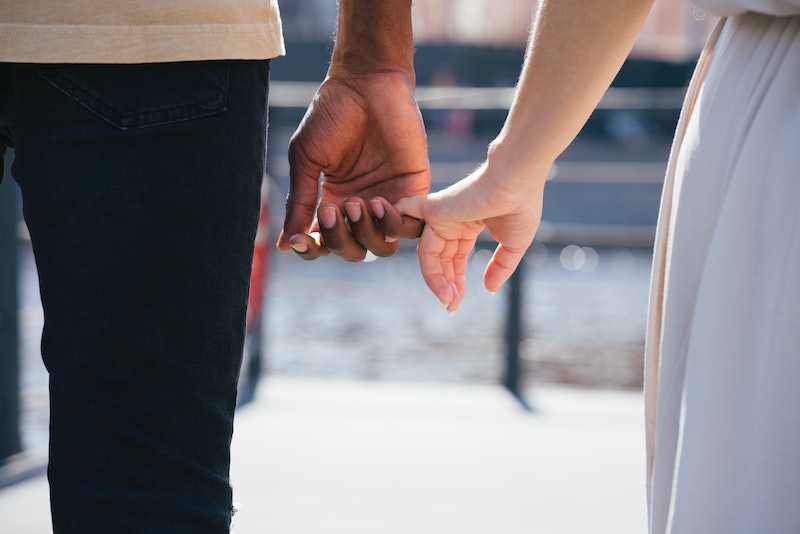 We were first introduced to domestic partnerships in the 1980s, as a way for individuals in the LGBTQ community to establish their relationship in a tangible way. However, just because same-sex marriage is now legal in the U.S. doesn't mean that domestic partnerships serve no purpose anymore. All kinds of couples, queer or straight, can still benefit from a domestic partnership if they so choose. They're a less binding way to enter a (hopefully) lasting relationship with a partner you live with — while gaining some tangible benefits.

Here are seven things to know about domestic partnerships before you consider getting one.

If you live in the following states, you can toss up the idea of a domestic partnership: California, Colorado, the District of Columbia, Hawaii, Maine, Maryland, New Jersey, Nevada, Oregon, Washington, and Wisconsin. Yet even within this group, each state has their own regulations about who can enter a domestic partnership. Some of them offer this option to same-sex couples only, while other allow all couples to register. Then, there are some states, including New Jersey, that only offer domestic partnerships to opposite-sex couples over the age of 62, which is evidently put into motion in order to avoid Social Security related marriage penalties (well, that seems like an outdated law).

Furthermore, the rules tend to vary in each city or municipality of these states, making the whole thing even more confusing. There isn't any federal law that governs domestic partnerships, so you're at the mercy of your local government. For example, most cities in Oregon allow both opposite-sex and same-sex domestic partnerships, while there is one place, the city of Gresham, that only gives the green light to same-sex couples (how is this still legal?!). Here's another example that might make your head spin. In New York City, San Francisco, and a couple cities in Ohio, domestic partnerships are sanctioned, even though they're not located in any of the above 11 states.

If you are flirting with the idea of a domestic partnership, you've got to do your research to see what the rules are for the specific location where you live. The Human Rights Campaign's website is a good place to start, as is the domestic partnership section on the Lambda Legal Defense and Education website. There you can find specific information about which cities and states recognize the partnership and what the benefits are. It certainly doesn't hurt to get yourself an attorney as well. They'll be able to walk you through the process one-on-one.

2. The Benefits Are Different In Each State Or City

When it comes to raking in the benefits of being in this kind of partnership, it's not as simple as living in a state that recognizes domestic partnerships. Some common benefits you'll find in these areas include being considered next of kin for medical decisions, being able to take leave under the Family and Medical Leave Act to care for your partner, and being put on your partner's health insurance.

But remember, just because you live in one of these states, that doesn't automatically grant you all of these advantages. The specific benefits differ from one place to the next. In California, for instance, same-sex domestic partners can receive an exclusion from their gross income for health insurance from their employer. In D.C., domestic partners and married couples live under pretty much the same alimony and child care laws. New York City, a city that boasts enviable domestic partnership rights, allows city employees to acquire subsidized health insurance for their partners and obtain the benefits listed under the Family Medical Leave Act.

It's important to note that there are some states that only offer their benefits to domestic partners who are state employees.

Even if you work for a company that's does business in the state where domestic partnerships are honored, that doesn't mean you'll inevitably reap the typical partnership benefits. There's a list of institutions, universities, and private companies that recognize your relationship and subsequently give you benefits, but what they offer you is completely up to them. So while some of them give extensive and comprehensive benefits (which, in some cases, might be costly for you in the long run), others only grant sick leave. When in doubt, take to the great world of the Internet to explore what the options are where you reside.

Strangely enough, there are some employers that give domestic partnership benefits even if they don't exist in a state that grants domestic partnerships. This may work in your favor if you're domestic partners who have just moved to a new state and are looking to receive healthcare benefits from the company one of you works for. Again, there's no black and white rulebook here. You've got to do your research to find out which institutions fall under this category.

4. Your Domestic Partnership Probably Won't Be Honored In Other States And Countries

This is one of the biggest differences between marriage and a domestic partnership. When you're legally married, you're legally married everywhere, at least in all the states and in most other countries. Unfortunately, the same isn't true of being domestic partners; keep that in mind if you travel across state lines or go overseas. The same rights you've got at home won't be privy to you everywhere else.

5. You Still Have To File Separate Federal Tax Returns

One of the 1138 benefits of marriage includes the option of filing a joint tax return every year. That's not possible if you're domestic partners. However, the state of California requires domestic partners to file their state taxes jointly, even though their federal taxes are a different story. Additionally, any transfers of funds and assets between the two of you are susceptible to being taxed, including the scenario of one of you dying and the other inheriting their effects.

6. It Might Be More Difficult To Adopt A Child Than If You're Married

To some, this might be a big deal. You certainly can start the adoption process if you're domestic partners, but the cold truth of the matter is that you'll probably face more hurdles than if you were a married couple. As unfair as it sounds, a lot of adoption agencies are much more inclined to give married folks a shot at adopting a child. If one of you has a child from a previous relationship and the other partner wants to adopt so you're both legally their parents, the process isn't nearly as difficult. However, there are some states that don't even allow this kind of adoption to happen legally among domestic partners.

7. Ending A Domestic Partnership Is (Sometimes) Easier Than Getting A Divorce

The first thing to know is that you can only terminate a domestic partnership in one of the 11 states that recognize the relationship. Just as the benefits differ across city and state lines, the requirements for ending your relationship vary in each state. In New Jersey, for example, the grounds for legally splitting are the same as the grounds for getting a divorce. But in Colorado, all you have to do is show that you're no longer in a committed relationship or you've found a new partner. Some processes might include a headache and a whole lot of paperwork, while others just require you to fill out one form and sign it.

The bottom line? If you have a serious partner you live with, but don't want to get married, a domestic partnership is definitely a commitment worth looking into — but it is still a commitment.