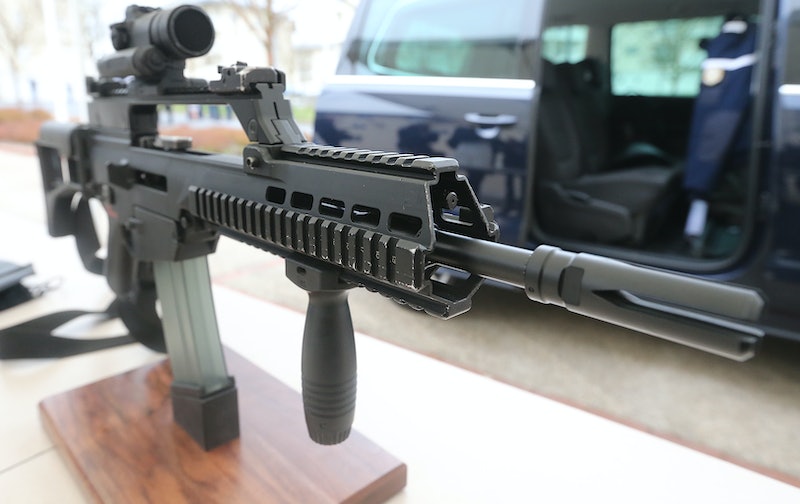 After the horrific June 12 mass shooting at Pulse nightclub in Orlando, Florida, the gun used in the attack has been called into question. It was initially identified as an AR-15 assault rifle, though it's since been determined that it was in fact a Sig Sauer MCX. Nonetheless, heated public discussion has since swirled around the AR-15. Now, the AR-15 creator's family has spoken out about mass shootings, and how their late father viewed the weapon.

It's imperative to have conversations about the AR-15 because of how often it has been used in mass shootings. This weapon appeared in the Sandy Hook shooting, the Aurora shooting, the San Bernardino shooting, and the Umpqua Community College shooting, just to name a few. Activists have called for a ban on the AR-15 because of this. And on June 15, Democratic Connecticut Senator Chris Murphy filibustered for 15 hours to put gun control reform officially on the Congressional agenda. Since the AR-15 has become part of the national conversation around mass shootings and gun control, it was only a matter of time before the creator's family weighed in on its tragic uses in recent history.

Eugene Stoner invented the AR-15 in 1959. The assault rifle was created as a military weapon — not meant for sport or defense. In an anonymous interview with MSNBC, Stoner's family spoke out:

Our father, Eugene Stoner, designed the AR-15 and subsequent M-16 as a military weapon to give our soldiers an advantage over the AK-47. He died long before any mass shootings occurred. But, we do think he would have been horrified and sickened as anyone, if not more by these events.

This is the first time the Stoner family has openly discussed their controversial legacy. Stoner's children and adult grandchildren's comments on how the gun was originally intended to be used could push gun control reform further on the issue. Since the AR-15 was created solely for military purposes, it was never intended for civilians or civilian use outside a context of war. Unfortunately, we know that has not been the case. But perhaps if Congress gets serious about gun control reform, we can stop selling these military weapons to civilians. Stoner's family said that the millions of dollars Eugene made from selling this weapon was all from military sales: "After many conversations with him, we feel his intent was that he designed it as a military rifle."

Stoner passed away in 1997, his gun patent expired, and dozens of copycat assault rifles were created. "What has happened, good or bad, since his patents have expired is a result of our free market system," Stoner's family told MSNBC. "Currently, a more interesting question is 'Who now is benefiting from the manufacturing and sales of AR-15s, and for what uses?'" This seems like a question that Congress and gun store owners alike should be considering right now.