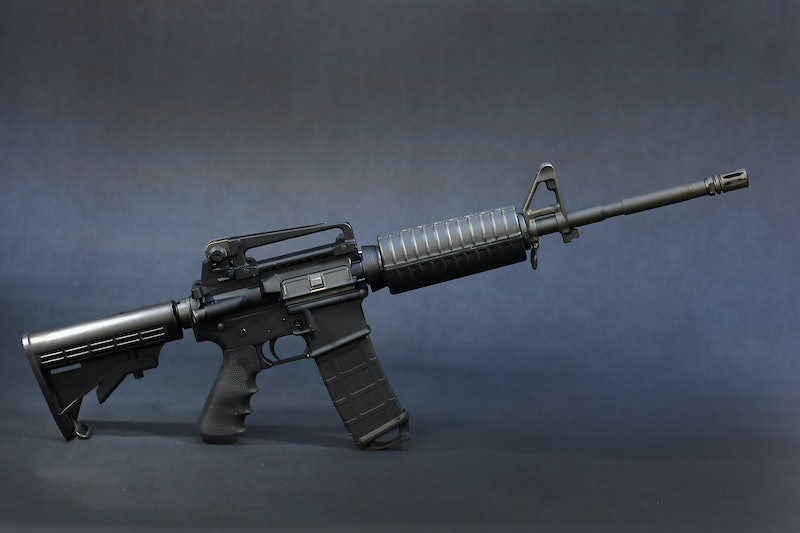 Update: In a press conference Monday morning, Orlando police confirmed that 49 people had been killed and 53 injured early Sunday morning at Orlando's Pulse gay nightclub in the deadliest mass shooting in recent U.S. history. After opening fire on the crowd, an individual named Omar Mateen had taken hostages and was ultimately killed in a stand-off with police; Mateen had called 911 and pledged allegiance to the Islamic State shortly before the massacre. Orlando mayor Buddy Dyer declared a state of emergency, and the massacre is being investigated as an act of terrorism. The gun used was determined to be a Sig Sauer MCX, not an AR-15, though they are aesthetically similar.

Earlier: Here we are again. Another mass shooting in the United States. Only this time, at least 50 people were killed, making it the worst mass shooting in our country's history. We've had the same conversations over and over: about terrorism, mass shooters, and, of course, gun control. Unfortunately, the type of gun used in the Pulse Orlando shooting is a conversation we need to have again. This style of gun is not a home defense hunting rifle, as much as some pro-gun advocates would like to claim. And the AR-15 is one we've seen before.

In December 2012, 26 people, including 20 children, were killed by an AR-15 style gun called a Bushmas at Sandy Hook Elementary School. According to the Connecticut State Police, the "shooter used the Bushmaster .223 to murder 20 children and six adults inside the school; he used a handgun to take his own life inside the school. No other weapons were used in this crime."

The "military-style" semiautomatic weapon that is a civilian version of the military-grade M16 can fire bullets as fast as a person can squeeze the trigger (it cannot, as some say, spray bullets with one squeeze of the trigger). AR-15 magazines can be bought at a 30- or 50-round capacity, but some — like the one used in the Aurora theater shooting — can have a clip that holds 100 rounds. This all means that the gun can kill 50 people and injure 53 more in a nightclub within minutes, with just one reload or without one at all, depending on the type of magazine the gun has.

Tell me, exactly, how this is necessary to shoot a deer or defend your home from an assailant?

AR-15 style guns have not only been used in the Sandy Hook and Aurora shootings, but also the San Bernardino shooting, the Umpqua Community College shooting, a shooting at a homecoming party in Wisconsin, the Clackamas Town Center shooting, and more. If the fact that this gun is continuously used in mass shooting after shooting, doesn't that make people stop and wonder? The style of gun was once illegal in the United States. Congress passed a 10-year ban on assault weapons in 1994, though the ban expired in 2004 when it was not reauthorized. If you're curious, every single one of these aforementioned shootings happened after 2004.

Listen, before you say that I don't know what I'm talking about and law-abiding gun owners shouldn't be penalized for the actions of a few, I get it. Coming from a rural town where our former mayor later became known for saying Americans are "proud clingers of our guns," I know plenty of gun owners who I'm sure wouldn't dream of using their assault weapon for, well, assault. But that doesn't mean I think they should have one, and it certainly doesn't mean there aren't legitimate facts out there that we need to consider when talking about the legality and necessity of having a gun that can — and has — kill and injure more than 100 people in one brief moment.

As many people on Twitter have pointed out, while AR-15 style guns and other assault weapons are legal, other items and actions that are arguably much, much safer are illegal. A gay man can't donate blood to the victims of a mass shooting, but the gun that was used for the mass shooting is totally OK, lawyer John Barcus pointed out. Piers Morgan wrote that Kinder Surprise eggs are banned in the United States, but this gun is just fine. Some people don't want transgender individuals to use a bathroom of their gender identity, but owning an assault weapon? No problem!

You can claim all you want that there are legitimate uses for an AR-15 style guns, like hunting, home defense, or sport shooting. Many will continue to disagree with you. You can claim that someone can kill people with a knife, and knives aren't illegal, but you can kill a lot more people with this kind of gun than a simple knife. You can claim it's just those damned liberals trying to take your guns away in spite of the Second Amendment, but they're just trying to ensure that less incidents like the one at Pulse happen — to keep you and your loved ones safer. And yes, it really works.

It's finally time, America. Let's turn this conversation into action.