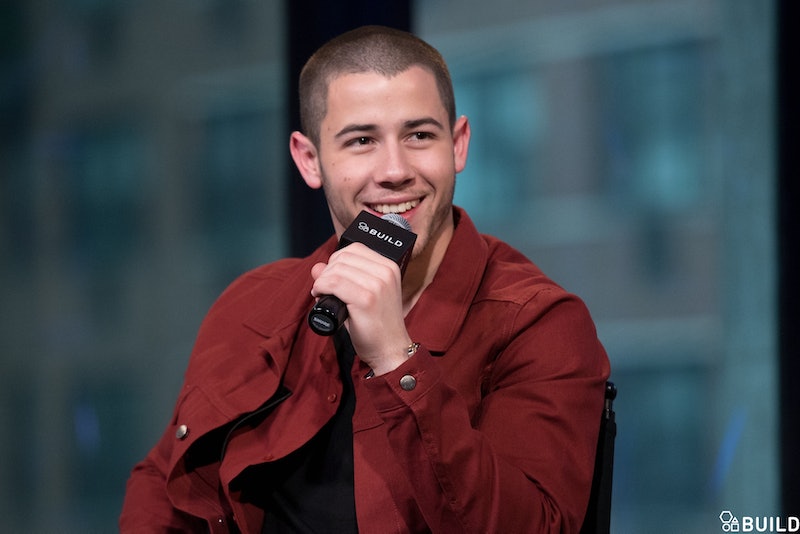 If you’re ever hankering for caffeine early in the morning and haven’t yet had your coffee, I can assure you, seeing Nick Jonas talk about his new album, his excitement about his upcoming projects, and his love of bacon as he moans (yes, he actually moans) is just as much of an upper. On Thursday, the incredibly charismatic *sigh* Jonas spoke with AOL Build, and his calm and conversational demeanor made it feel like I was hanging out with an old pal. You know, an exceptionally good looking one who has the chutzpah to be decked out in all red. Speaking of his totally chill vibe, Jonas' take on his new album, Last Year Was Complicated , and the inspiration behind it make the star seem all the more down-to-earth and just straight up real.

AOL Build's Joe Levy credits the singer for his candidness in admitting that the album was fueled by his real life relationships. A fact that Jonas isn’t hesitant or seemingly tired of talking about, because he knows that's how genuine songwriting material is born. Endearingly enough, the former boy bander’s only qualms about his based-on-a-true-story type of album is that it doesn’t cause the people he used as muses any distress. Can I get a collective, “Aw”?

Levy directly references Jonas’ "Champagne Problems" being written “a day or two” after a breakup, and what the singer has to say about it is nothing short of perfect. You guys, as it turns out, Jonas is the best person to break up with. Not that you’d ever want to break up with him. But, if it’s absolutely necessary, he’s most definitely your guy.

Jonas recalls the following about the birth of "Champagne Problems" as an immediate response to his breakup:

"It was literally the next day, I think. You know, we had this bottle of champagne we were saving for our anniversary. It was in about two weeks, we didn’t quite make it there. But, in a kind of strange ending to the whole thing, we said why not share this toast to the time we had together. And, it was actually very nice. Basically, I went to Mammoth with some friends and collaborators the next day, [and] wrote this song."

Doesn't get any more legit than that. I have to give the guy credit, the day after my breakup I was anything but productive or mature.

Bittersweet reminiscing aside, Jonas gets even more real when Levy brings up the song "Chainsaw." It’s in this elaboration that his true motivations as a person and an artist shine through. He explains the idea for the song sparked while he was just simply living as a brokenhearted guy. He says that the idea come to him as he was "walking around the house I spent a lot of time in with my ex, and feeling like I wanted to go and just destroy the whole thing as a way of letting go."

"What was really interesting to me was that it was so specific to my experience, and this is, I think, the beauty of songwriting, is that we have the ability to tell our stories, and it means something to us. But then you open it up to other people, and their experience and how it affects their lives."

And that isn’t just lip service. Jonas’ family friends were just some of those admittedly affected. He explains,

"A friend of mine and her husband were listening to it — and this is one of my parents’ closest friends, her parents — and unfortunately a number of years ago her mother passed and it was very sad. But her husband said, 'This song, "Chainsaw," reminds me of your dad and how he’s had to live in this house he lived in with his wife who he loved and who he lost.' So, a totally different angle on it. And so, I’m hoping that 'Chainsaw' is the kind of song that can help people through whatever it is in their life that they need to let go of. And it’s been helpful to me."

After going on the most delicious of tangents about "Bacon," the song, bacon the breakfast food, and alarm clocks that wake you up to the smell of bacon, Levy gets Jonas back on the subject of songwriting, asking, "The idea that these are specific things to you, but universal to the listener, is that something you thought about going into this?” Unsurprisingly, it was.

"Definitely. I mean, the biggest lesson I learned as a song writer… in an 11, 12 year career, is that you have to write about things that are real to you and relevant to you. And it doesn’t always have to be emotional and heavy, i can be just about whatever it is, but it has to connect. But it can’t be hyper-specific or its going to alienate some people."

To better explain himself, he references two living lyricist legends as guides,

"I’ve tried to adopt a balance of professional songwriting awareness of the world and it being broad enough to make sense. You know, people like Taylor [Swift] and Drake do that very well, they’re able to kind of create something that means something to them but also everyone here would love to listen and connect to in their own way."

If his own testimonials about Last Year Was Complicated's versatility aren't proof enough, I can say from personal, obsessive experience that Jonas strikes a chord with his musical stories. Vulnerability is key in being relatable and he's unlocked that truth with this new album. And, you know, it seems to be really working out for him. I think we'll have to add his name along with Swift and Drake's as "designated musical soulmate" sooner rather than later.